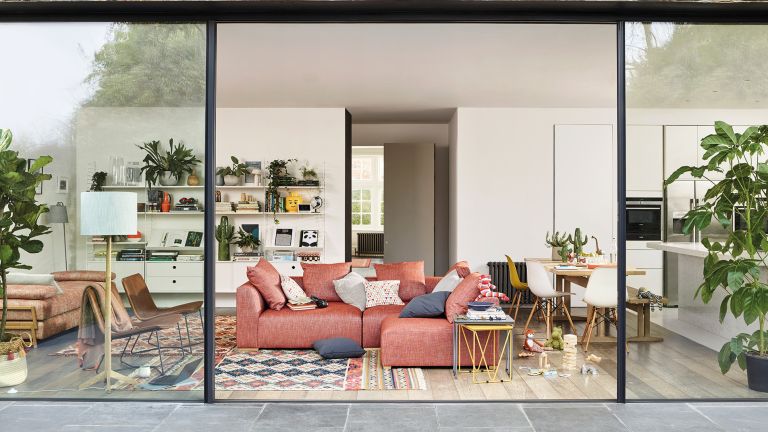 We will put our hands up and confess that us lot at Real Homes are pretty nosey when it comes to snooping inside people's houses (in a 'we need inspiration' kind of way, not in a 'we are going to rob your TV' way) and seeing how they use their space. So as you can imagine we were super excited to see that John Lewis & Partners has published a report called ‘The Things We do In Our Living Rooms (and the things we wish we didn’t)'.

The report surveyed 3,409 shoppers to reveal how we live in our living rooms, how the way we use the space is changing and what we are buying and no long buying to furnish them.

Spoiler: we aren’t so keen on mantel clocks anymore.

What do we use our living rooms for most?

While watching TV remains the main activity in this room, with 96 per cent indulging in the past month out of those surveyed, this room now has more purposes than ever before. Research uncovered a list of 25 activities which shoppers had participated in in their living rooms in the past month... and the top contenders were:

We are also using our living room a lot more for social gatherings (perhaps explains the dancing and the cocktail making). In the past month alone, 63 per cent of those surveyed had hosted a get-together in their living rooms.

What we want to do less of in our living rooms?

The survey also looked into what we want to stop or cut down on in our living rooms. The biggest bad habit that we wanted to break was eating on our laps or having dinner in front of the telly. Nearly one fifth want to do less ironing in their living room and nearly as many want to get out of the habit of answering their phone while eating, or watching TV. One in seven want it to be used less as a playroom.

When it comes to using our living rooms as a beauty salon we are pretty torn. Nearly a third of us have painted our nails or put on makeup in the living room in the past month, but two thirds think the living room isn’t for dolling yourself up.

How has the way we decorate our living rooms changed?

So all these different ways we are now using our living room is obviously going to affect the way we style and decorating the space...

We make room for a cosy office space

Look at the fact that now a fair few of us work in the space. John Lewis & Partners has seen a clear shift in demand away from traditional desks with lots of storage in favour of more style-led pieces, with sales of this type of desk up 80 per cent year on year.

There has also been a huge growth in office chairs which have a softer more homely feel rather than purely functional ones. Sales of these chairs with wood rather than metal legs, and fabric rather than plastic or mesh seats are up 125 per cent year on year, as people look to create office spaces which blend in so they can just forget them when they’re not working.

‘We’re wanting more from our living rooms than ever before and the changes in how we live are strikingly visible in this space. From reflecting our personalities, being a space to work, exercise and much more, our living rooms have never been quite so alive, flexible and unique.’ Pip Prinsloo, Partner and Head of Design for Home comments.

We have gone open plan

Demand for the once popular three piece suite has also decreased, replaced by statement sofas and accents chairs which allow us to express more personal styles. The sales for modular sofas are up, which we are putting down to the increasing popularity of open plan living since this style of sofa is more flexible.

We are ramping up the decor

We are also all being a bit braver in our living room decor. When those surveyed were asked how they were planning on decorating their living spaces this year, 48 per cent of those asked are more likely to be bolder, using more colour and more pattern than they once would have considered.

‘When it comes to decorating our living rooms around half of shoppers (48 per cent) who are planning to re-decorate this year expect to be bolder in their choices. Over the past year nearly one third of customers have bought brass, copper, velvet or marble items for their living rooms, and pink is replacing grey as the new neutral colour to decorate with,’ explains Johnathan Marsh, Partner and Home Buying Director at John Lewis & Partners.

We are bringing the party the home

The fact we now use our living rooms for way more entertaining is also having an impact on the way we decorate. Side tables, bar carts, pouffes for added seating have all become part of our living room furniture. Plus we are adding more tech to our living room, probably down to the fact that things like speakers and sound bars look much nicer than they once did, plus the lack of ugly wire helps.

‘As tech becomes smarter and the demand for ‘invisible tech’ increases, we’ve see an uplift of 12 per cent in soundbars,’ said Anna Forbes, Partner & Assistant Buyer, Vision. ‘There’s fewer wires, they look prettier and you only need one product as opposed to the five speakers of five years ago.’