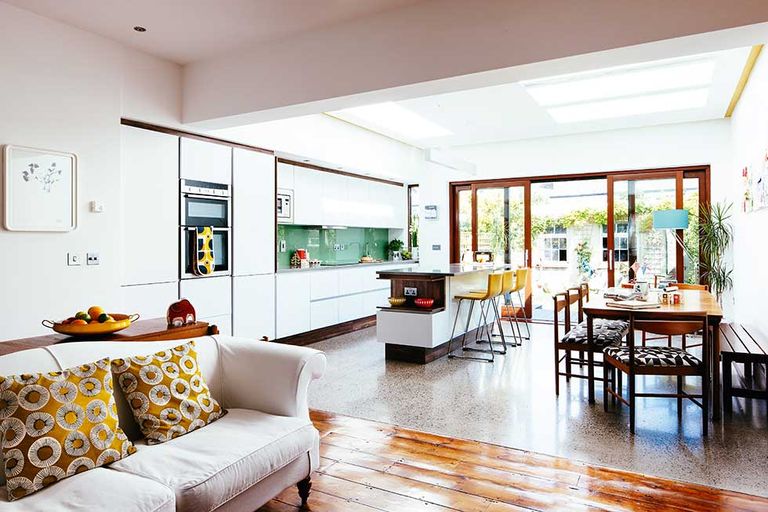 Browsing kitchen extension ideas is a great way to get your project kick-started. An extension, after all, is a popular home improvement project, but what most people don't know is that it doesn’t have to cost you a fortune. Even on a small budget, you can up your home's value and transform the look of your home, allowing for open plan living and beautiful design with an extension.

Whether you're looking for kitchen extension ideas for under £100,000 for a characterful farmhouse, a 1970s semi or a Victorian terrace, be inspired by our selection of beautiful spaces.

For plenty more kitchen ideas, inspiration and practical information be sure to check out our hub.

Here are some of our favourite kitchen extension ideas where budgets below £100k still delivered really impressive results:

Emma and Julien Barber spent more than a year looking for a new home after living in a 1920s semi in Swindon for 10 years. They’d viewed several houses that weren’t right for them before realising that they could create the space they needed and the house they wanted where they already were.

Their new kitchen is minimalistic, clean and uncluttered, with bi-fold doors that open out onto their lovely garden.

The whole renovation cost £84,000, with the bulk being spent on the kitchen extension – this worked out much cheaper than the cost of moving.

Read our tips on building an extension for under £100,000 for more ideas.

Originally, this kitchen was impractically small for the four-bedroom detached house that it serviced and the growing Lewis-Pierpoint family. They made good use of the third of an acre that their house is set in, taking out a chunk of the vast garden in order to extend their tiny kitchen.

High-gloss blue units and contemporary, white surfaces bounce light around the room from the bi-fold doors opposite the kitchen island, making it the perfect place for family dinners. In total, £60,000 was spent on creating the perfect family kitchen.

Want a cheaper extension still? Find out how to build an extension for under £50,000.

When Angela Hart and Richard Rush first laid eyes on this regency cottage, they knew the small galley kitchen wasn’t going to be big enough for them. As part of a two-storey extension project, the couple knocked through the downstairs bathroom and extended into the garden.

They didn’t want to spend a fortune on a kitchen that would, inevitably, be tired and out of date in 15 years, so they opted for antique furniture that was cost effective and would last a lifetime. For about £66,000 they created a quirky kitchen that would stand the test of time.

Find out more about planning a double storey extension in our guide.

Like many 1940s homes, this one had a tiny kitchen that was far too small for a property of its size. The solution was to extend and open out the back of the house with vast bi-fold doors. Minimalist white units, along with white walls and ceiling, make the room feel even bigger than it already is. A use of dark wooden flooring and a charcoal feature wall creates contrast and enhances the space. Despite its size, this single storey extension was achieved for just £78,000.

Find out more about planning a single storey extension in our guide.

This five-bedroom Victorian terraced house in south London had masses of potential for a kitchen extension. There was a lot of dead space in the side return, and an old conservatory at the rear of the house that could be put to better use. An L-shaped extension was proposed to the local planning department, and a month later, the owners were ready to go.

A row of rooflights flood the room with natural light, and big French doors at the rear open the new space out onto the garden. As the house had no remaining original features, the industrial styling fits right into the blank canvas. A spend of £98,000 transformed the original, ugly kitchen into a beautiful, industrial space.

Owner Pippa Mundy’s approach to renovating her Cardiff home included stripping it back to uncover interesting features, along with being flexible about her plans when she hit a speed bump. It has resulted in a truly interesting kitchen, with a reclaimed wood island at its heart.

Extending into the side return allowed for the inclusion of glazing across the roof, helped greatly by the triple-pane glass doors at the rear of the kitchen. The quirky extension was created for £85,000.

Find tips for building a side return extension in our practical guide.

Getting a home with the kitchen of your dreams doesn’t necessarily mean trawling the estate agents. For Frazer and Frieda Furlong, it meant patiently saving up for a decade so that they could craft the light-filled extension they'd alway dreamt of.

Creative use of colour and pattern contrasts against contemporary units and warm woods, while the whole room is brightened by rooflights and solid wooden sliding doors. The exterior contrasts with the rest of the building, as it is rendered in a modern blue, with silver decking leading down to the garden. Spending £78,880 has given the Furlong family exactly what they wanted.

Find more information and ideas for creating a light-filled extension in our guide.

Ian and Gillian Roberts bought this home with the intention of carrying out a complete renovation in 2008. Then the family was shipped off to Hong Kong for Ian’s job before the project could get underway. On returning, the family were faced with either a massive renovation project, or another move.

Instead of taking the easy option, they jumped into the renovation. Their kitchen, now situated in an extension that used to be dead garden space, is a modern, bright space. It is filled with light by a glazed wall at the end, and large rooflights above. The kitchen extension cost about £72,000.

Find out how to renovate a house from scratch in our comprehensive guide.

When Paul Reid took his partner, Elaine, to view this 1960s detached house, the galley kitchen was a far cry from what she had pictured. The units were falling apart, it was brown and mustard and was only serviced by electricity. It was a nightmare from the 1970s, unaltered and out of date.

The couple went for a streamlined look with their final design, opting for contemporary, eye-level ovens and curved units. They may have spent a little extra on essentials like worktops and units, but saved overall by adapting their design and cutting out appliances that they didn’t need. From an unattractive galley kitchen they have created this luxurious space for just £58,000.

For more family-inspired ideas and other kitchen design advice check out our dedicated page.

After an ambitious two-storey extension to Nicola Wilkes and Stuart Davies’ 1960s home left them squeezed for funds, the couple had to get creative when it came to designing a new kitchen at the end of their renovation project.

Rather than going all out, the couple spent the money where it mattered. The basics were kept plain and simple with reasonable kitchen units and worktops. The money went on the finishing touches to add a sense of luxury with the light fittings, tiles and furniture making the biggest impact on the space. The whole project cost £74,424.

Having viewed a lot of beautiful houses in the Finsbury Park area, Emily and Angus Grierson decided this was the place for them. The problem was, they didn’t want to move into a perfect house that had been pre-renovated by someone else. They wanted to do it themselves.

When this house, ripe for extension, came up for sale, they snapped it up and picked up their tools, ready to turn it into their home. The building grew out into the garden and the extension housed the new, open plan kitchen – a bright and colourful space, perfect for the couple’s needs. The project cost them £68,000.

Mel and Alex Walker purchased this three-bedroom house in south-east London, recognising that it had a lot of potential. The side-return wasn’t utilised and presented the perfect opportunity for an extension. Fortunately, an architect worked out of the same office block as Alex, so they enlisted him to help with their project.

The plan included a dining area next to the kitchen and a pitched roof; that way they could incorporate Velux windows, which, together with the bi-fold doors, would bring in copious amounts of light. To create their perfect extension, the couple spent £95,720. Not an unreasonable sum for such and incredible house.