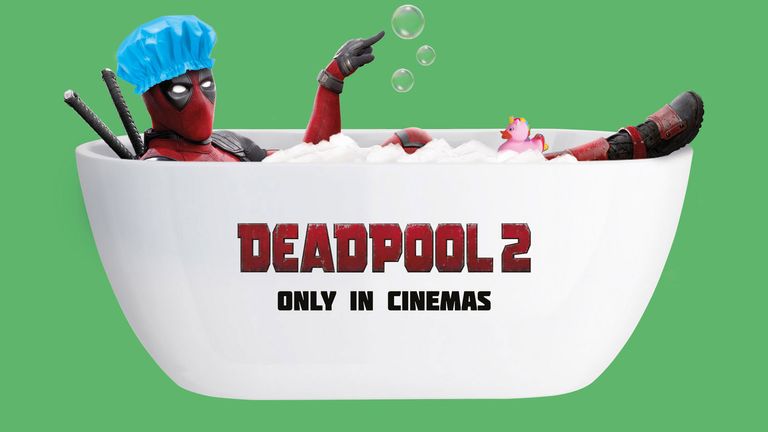 Potty-mouthed superhero Deadpool is pushing Victorian Plumbing’s bath suites in what must be one of the adland’s most unusual marketing match ups.

With the merc with a mouth due to hit cinema screens in Deadpool 2 on May 15, 20th Century Fox reached out to the brand to see if they’d be interested in a partnership.

The result sees posters of the x-rated X-Man (sort of) reclining in a tub full of bubbles and proclaiming, ‘I like big baths and I cannot lie’, and standing in front of a sleek white bathroom with the tagline ‘I’ve got a suite behind’.

A spokesman for Victorian Plumbing said they saw the collaboration as a chance to appeal to younger homemakers: ‘We were excited about working with Deadpool 2. It was off-beat and a bit unexpected. We want to to be at the forefront of first-time buyers’ minds when they start thinking about bathrooms and renovating.’

And although Deadpool isn’t shy of a little toilet humour, Victorian Plumbing said they wanted to keep thing clean(ish) when it came to the promotional puns. ‘We wanted to stay away from the crass while remaining tongue in cheek. All the ads were created in partnership with 20th Century Fox.’

As part of the promotion, Victorian Plumbing will be running a competition giving entrants the chance to win a trip for two to visit Vancouver – the hometown of Wade Wilson. social.victorianplumbing.co.uk/deadpool/

They haven’t received word from actor Ryan Reynolds on what he thinks of plugging their products, but they’re hopeful he laughed (like a drain) and might be open to further collaboration.

‘We’d be very surprised if he hasn’t had a look over them. We know that he’s in London next week to promote the film, so it will be interesting to see what we can do.’