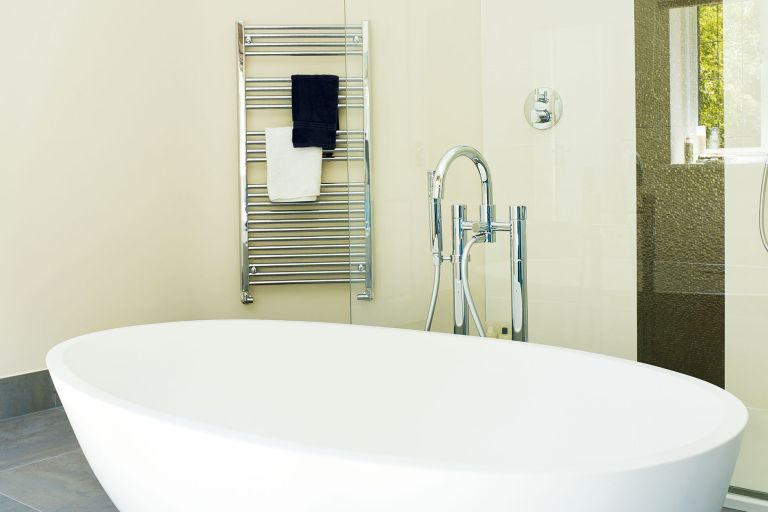 ‘This house was a huge renovation project for us when we moved in. We added a two-storey extension onto the back of it, almost doubling the floorplan,’ recalls Andrew. ‘The extension included this spacious family bathroom, which our daughters were using at the time.’

However, 20 years on, the bathroom had become drab, dated and unused, so Andrew and wife Gill decided to redesign it in a contemporary style with striking statement pieces to make the most of the large room.

With such a generous space, they wanted to invest in luxurious features, such as an attention-grabbing freestanding bath and a deluxe walk-in shower. ‘Our initial plan was to separate it into two bathrooms that would become en suites, but as this would have given us five bathrooms in total, which felt unnecessary, we decided to create one outstanding bathroom with stacks of wow factor instead,’ explains Andrew.

During one of the couple’s visits to bathroom showrooms to research ideas, they found the perfect composite bath and basin to create the look they were after. ‘We loved the bath’s organic shape, and the fact that it was lighter and less expensive than a stone tub, but with the same look and feel,’ says Andrew. The glass-fronted vanity unit was also found in a showroom, and the couple liked its deep

With all the main elements coming together, Andrew and Gill decided to find a plumber to help them with installation, but they were advised at a local tile shop that the items they had chosen would need to be fitted by a specialist bathroom company to achieve the best finish. ‘The tile shop recommended Yeardye Luxury Bathrooms to plan and install the new fixtures and fittings,’ explains Andrew. ‘After we had met designer Trevor and his team, we knew they would do a great job.’

The couple had a firm idea of the layout they wanted, but needed help with details, such as heating and plumbing. They had only planned for one heated towel rail, which Trevor thought would leave the large space feeling chilly, so he recommended fitting two more radiators, including a mirror-fronted one, as well as electric underfloor heating. ‘He had a good point that when a towel rail is covered with towels, it negates the heat output, so it seemed a better idea to fit more than one,’ says Andrew.

The couple had also bought a back-to-wall WC on one of their showroom visits, but when the design team investigated the wall where it was to go, they found part of a chimney breast, making it too difficult to install. They suggested a close-coupled style instead. This was fitted onto a false wall that was built to accommodate the recessed bathroom cabinet and the weight of the wall-hung vanity unit. ‘Structural dilemmas weren’t a problem for the design team, which was a blessing, as it meant we didn’t have to compromise on our vanity unit. They simply added strengthening batons into

The enormous shower screen was installed by a specialist in bespoke enclosures. Initially, it was thought that such a large piece of glass would have to be installed in two sections, with a UV join. To disguise this, Trevor suggested a column of dark mosaic tiles in the centre of the wall, in line with the join, but it turned out that three men managed to lift the glass in one piece up the stairs.

‘We were advised not to fit a floor-to-ceiling screen, but to leave a small gap at the top so moisture can escape. In turn, this gap meant the screen was the right size to fit up the stairs,’ explains Andrew. ‘Although the column of mosaic tiles wasn’t necessary, we like how it draws the eye to the shower space and creates interest, or it would have just been a plain area.’

When it came to the final touches, the bathroom designers ensured that they got the details right to create a beautiful finish, with silver-coloured trims along the tile edgings and silver-grey grout between the floor tiles. ‘It’s these that have made all the difference to the look of the bathroom,’ says Andrew. ‘We would never have thought of using a coloured grout, or extending the tiles up the wall to create a tiled skirting trim.

‘Before we enlisted the help of the bathroom company, we were struggling to imagine how the room would come together, and were concerned that each element of the space would feel like a separate area,’ he continues. ‘However, they skilfully made it all work as a whole, and created a balanced, harmonious room that is a real joy to use.’