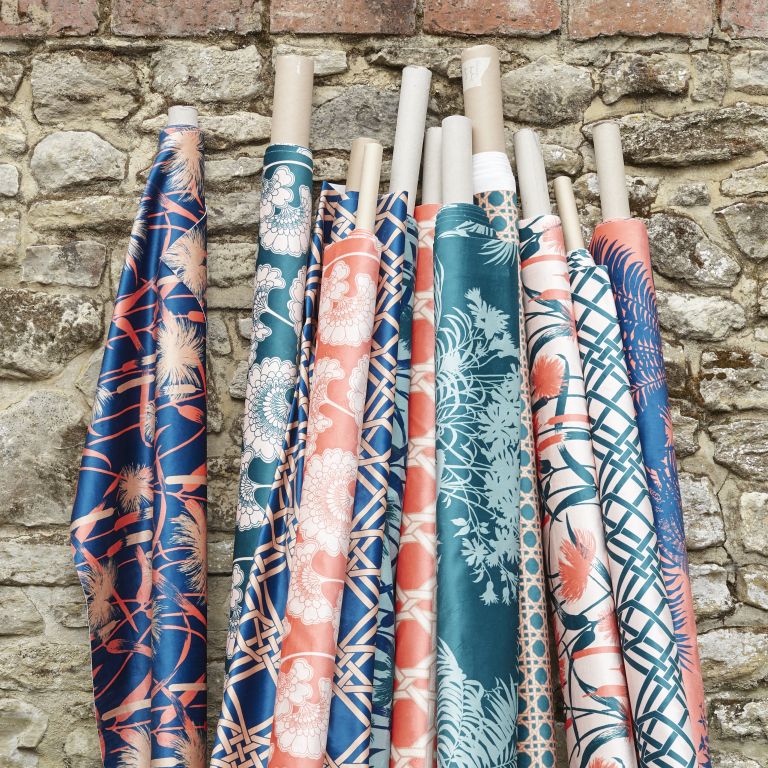 If you aren't aware of who Florence Broadhurst is, let us give you a quick back story. She was a very well known and popular Australian wallpaper and textile designer and throughout the '50s and '60s she produced more than 500 eccentric, bold and beautiful designs that were all based on her travels around the world.

Broadhurst was already well known but her name became widely famous when she was the victim of an unsolved murder, killed in her Paddington studio in 1977. There was speculation that she had been murdered by a serial killer, although her friends and employees felt it was more likely it was someone she knew and that the killing was motivated by money.

Upon her tragic death, her designs ceased to be manufactured. But, now, her prints are being brought back to life by a new UK-based design studio. The team have gained exclusive access to Broadhurst's design archive to create a range of products that pay homage to this extraordinary designer.

The initial launch, which was announced earlier this week, compromises of 61 beautiful wallpapers made up of 12 designs and 23 fabrics in six designs. The patterns have been created using scans of Broadhurst's original silk screens that she designed over 50 years ago.

'We were so excited to get access to the archive and to find such a wonderfully diverse and eclectic treasure trove of over 500 designs. The challenge was which of the designs to choose for our first collection – we were completely spoilt for choice!  So we chose prints which we felt were iconic (particularly Japanese Floral, one of Florence’s best known designs) and on trend for modern interiors, which led us to focus on botanicals and geometrics,' explain the founders of the new Florence Broadhurst studio – Rebecca Lawrence, Carole Spink and Jane Martin.

'Concurrently with trawling the archive, we got to know Florence through a couple of great biographies.  She lived a truly extraordinary life, travelling around the world and reinventing herself along the way. It has been really fun to see the archive in that context, and to try to identify the inspiration behind each print.'

The collection comprises of a diverse range of patterns, and go from Art Deco-esque geometric shapes and oriental inspired patterns to more pretty floral prints and traditional tapestries. The new range of colourways are just as diverse: bold bright colour clashes and whimsical pastels will both be found in this new launch.

To acknowledge that Broadhurst was all about layering patterns and combining different colours, the collection has been designed to make it easy for homeowners to do the same. Many of the wallpapers and fabrics have 'companions' that can either be used to complement or contrast each other in the same room.

Intrigued? Go and take a look at the whole collection over on Florence Broadhurst. Find out more about her fascinating life on Wikipedia.