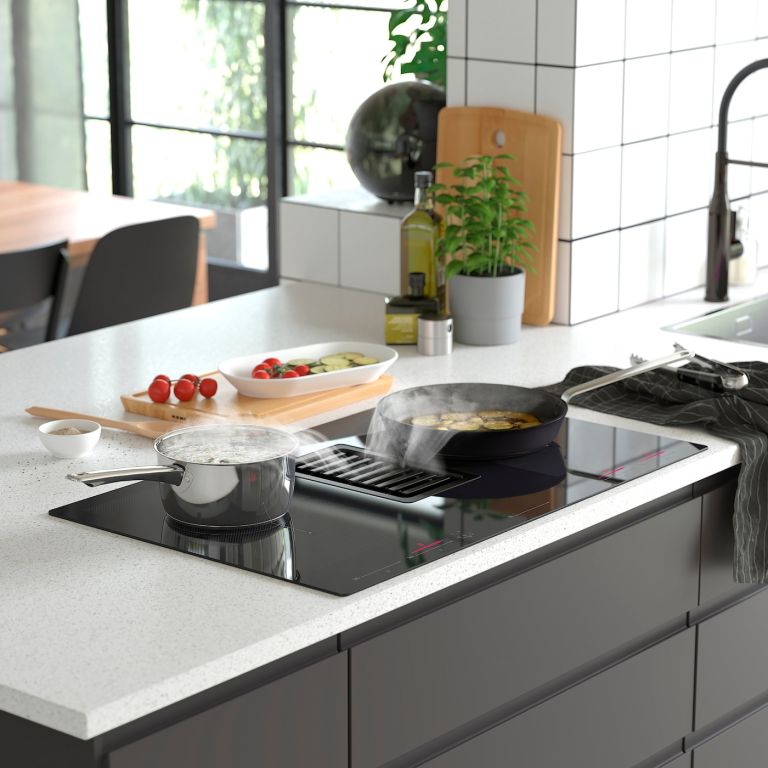 Extractor fans are ugly. There, we said it. No one looks at an extractor fan and thinks 'Damn that is one cute fan'. Saying that, they are a kitchen essential and so we have to put up with them.

Now this is the exciting part. Recently, kitchen companies have pushed the boat out when it comes to extractor fans and now we're seeing products that will near enough remove the need for unsightly fans altogether. No longer will our kitchen be burdened with this big bulky fan, with the introduction of new induction hobs that have an extractor fan built in. Clever.

And it gets better, because our go-to store for cheap homeware has started making them too! Good old Ikea has just launched the Fordelaktig (don't ask us to say it) which is an induction hob and extractor fan in one.

Keep scrolling to find out more about this ingenious new product and then head over to our kitchen ideas hub page for loads more ideas and advice.

Introducing the Fordelaktig. Oooh just look at all that steamy action, and notice how the steam isn't floating about above the pots and pans it's been sucked into the centre of the hob. Because with the Fordelaktig you don't need a separate extractor fan to hang above your hob – that makes more room for some lovely shelving and without the big bulky fan, your kitchen will immediately feel more spacious.

As well as looking lovely, it's a clever and energy-efficient piece of kit. This extractor fan automatically adjusts to match the hob’s heat level so no energy is wasted. It's also really quiet, so it will no longer sound like a plane is taking off in your kitchen every time you turn on your fan. This makes it great for open-plan kitchens that are used for socialising as well as cooking.

In terms of price, this Ikea induction hob is a lot cheaper than most others that are currently available: it's £1,150. So, if you're thinking of replacing both your hob and induction fan, this would be a much better investment.