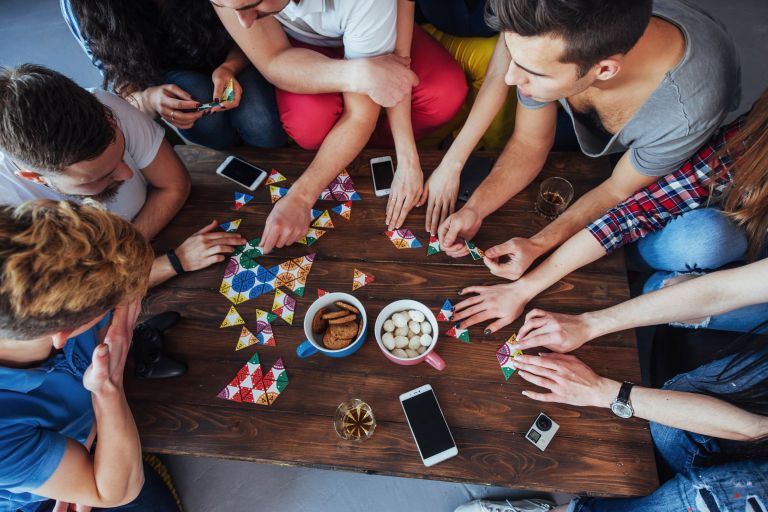 The best board games are a life saver on rainy days, family holidays, and, of course, when you are stuck inside for the foreseeable future because of a pandemic. What better way to get rid of all that tension that's built up during the day with a very competitive, very shouty game of Monopoly? We're joking (kind of).

From silly games to get the whole family involved to tactical two player options, we have played our way through this list to give you the best board games. Take your pick and stock up, then head to our family hub for more ideas on keeping the family busy.

Players: 2-5
Suitable from: 8 years
Play time: up to two hours

If you haven't heard of Ticket to Ride before, it looks complicated, but it's actually really easy to learn and has just the right amount of strategy involved to still be playable time after time. The basic idea is that each player is given journeys they have to make by laying down their trains, but it's more complex than that, with tunnels, bridges, ferries and obviously other players getting in the way.

It's suitable for 8 years plus, but there is a more child-friendly version called Ticket to Ride First Journey.

While not technically a board game, this is a classic, and we are big fans of Linkee. It's a good family game, and like all good family games it can get a bit shouty. The basic rules are that you have to answer four questions and then find out the link between all your answers. Example: What is the name of Robin Hood's friend? Who judges The Great British Bake Off? What is the name of Kate and Will's oldest child? Errr, this one is less straightforward... what would someone propose with? Got it?

A classic board game that the whole family can play

-Some of the questions can be challenging

Another classic. Even if you already own it, might we recommend you update your version to a more recent one that people born after 1960 can get involved with? We are tired of answering questions like, 'Where was the Olympic games hosted in 1994?' (Lillehammer, btw) and 'Who won Wimbledon in 1981?' (John McEnroe, durrr).

There are now editions you can get, too, if the standard general knowledge version is a but too broad for you. There a 2000s version which sounds right up our street, a family edition that's great for younger kids, and loads of mini-travel versions that are quicker to play and come in every theme going.

The best board game for younger children, easy to play and great for learning

Players: 1-2
Suitable from : 3 years
Play time: as long as you like

If you have kids under three to entertain, Trivial Pursuit probably isn't the one. Memory games like these ones are great for younger kids because they also learn as they play. We couldn't resist this Gruffalo memory game, the illustrations are super cute and will be recognisable to your children. The game itself is really simple – a three year old could do it, you just have to match up the cards with the same characters on.

Definitely not family friendly but does provide a load of laughs

Players: 2+
Suitable from : 18 years
Play time: as long as you like

+Hilarious +Different every time you play it

Definitely not child-friendly, this is game for adults only and probably only family suitable if you feel very comfortable being exposed to a side of your gran you never thought existed. The aim is to pair up popular memes with a caption, then someone will vote for the funniest. Mature? No. Hilarious? Absolutely.

-Only a two player game

Looking for a two player game that can be as quick or as long as you want? Patchwork is just that. It is very easy to pick up (the box says it is suitable for ages eight and up), but can take a while to master like a pro – and that is the fun of it. The goal is simple: cover as much of your quilt board as possible with the patches to end the game with the most buttons. Buttons are your currency and different patches are worth a different amount, so choose your patches wisely to finish with the most profit. It is a good tactical game without the length of something like Risk.

-Lots of bits that can potentially get lost

You just can't go wrong with bingo. You can shout, don't have to concentrate too much, and all ages can get involved. We especially like this oceans edition: instead of using a dabber, you have to match the sea creature to the one on your board. There is also a bird, dog, cat edition, and more!