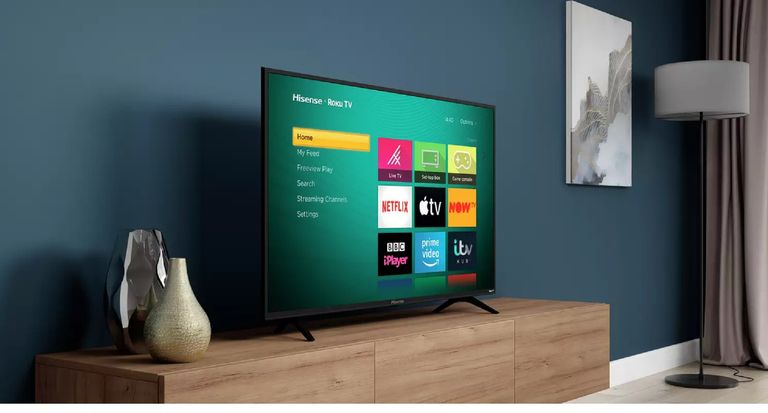 Phew! We've just found a fab Hisense TV deal which is back in stock just in time for Father’s Day and could be in your house TODAY. Relieved? We are, too. Especially because it means that you can bag one of the best TVs around, for less.

Exclusive to Argos, the Hisense Roku TV – available in screen sizes 43in, 50in, 60in and 65in – are a series which have recently been awarded with What Hi-Fi credentials. Simple-to-use, affordable and packed with entertainment, these TVs come with 4K, HD and 4K HDR capabilities with a regularly updated software and 8,000+ channels including Netflix, Amazon Prime Video, Disney+ and Apple TV+. Also, you can access The Roku Channel for FREE with 10,000+ films, episodes and documentaries at your fingertips. And the best bit about all this is that it can all be yours from just £249, and delivered direct to your door for FREE with some models even available to be delivered TODAY with Fast Track delivery.

Keep scrolling to get your hands on this amazing buy, and check out with it sooner rather than later so you can get dads Father's Day gift sorted and in the bag.

Hisense Roku TV 43 Inch R43B7120UK 4K Smart LED TV with HDR | was £329, now £245 at Argos
First up in the series of Hisense Roku TVs, this 43in TV is ideal first-time streaming dads. It's got access to all the content he'll ever need, and it's a good size from placing in pretty much any room of the house. Deal ends: Tuesday 30 JuneView Deal

Hisense Roku TV 50 Inch R50B7120UK 4K Smart LED TV with HDR | was £379, now £299 at Argos
The Hisense R50B7120UK will make a great second TV and is one which is the perfect size for placing in the living room. There's something for all the family on this tele with access to a wealth of entertainment and streaming services, all in incredible detail. Deal ends: Tuesday 30 JuneView Deal

Hisense Roku TV 55 Inch R55B7120UK 4K Smart LED TV | was £479, now £329 at Argos
This 55in TV will make the perfect addition to the living room, not to mention creating a big surprise for dad. He'll be able to watch all his favourite shows in brilliant quality and on a screen which he'll be super chuffed with. Deal ends: Tuesday 30 JuneView Deal

Hisense Roku TV 65 Inch R65B7120UK 4K Smart LED TV | was £649, now £449 at Argos
The biggest screen in the Roku TV series, this TV also has the biggest saving to be made and is one which can keep the entire family entertained, not just dad, all through out the year. It's mega simple to use and love. Deal ends: Tuesday 30 JuneView Deal