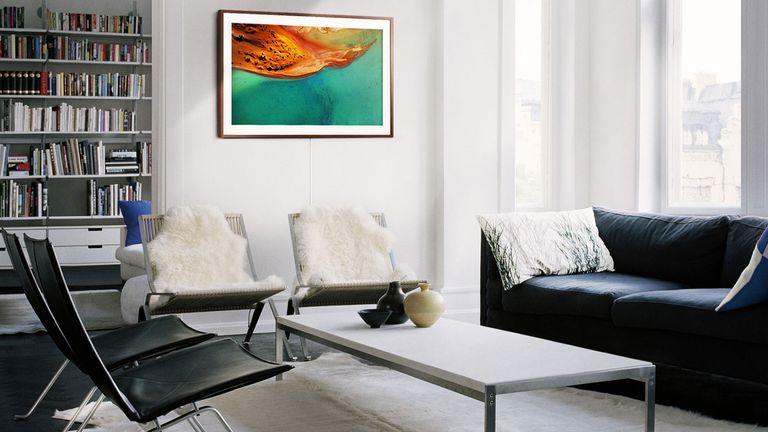 A cleverly designed TV for people who’d really rather not have one. It’s not the best picture performance for the money, but its design is ultimately what will sell it to people - and those people will love it.

Our Samsung The Frame review is a must read if you're considering investing in this coveted television and wondering whether it's worth the hype.

Possibly the most attractive television model around, Samsung The Frame merges innovative technology with clever design in a bid to transform the look of your living space. As well as your viewing experience.

In many ways, it’s much like  Samsung’s other design-focused TV: the Serif. But there are a number of factors that differentiate the two – particularly for those who would prefer for their TV to blend into its environment, as opposed to standing out.

Discover more below as we reveal our thoughts on Samsung’s most stylish TV yet.

What is Samsung The Frame?

Samsung’s The Frame is a 4K TV from Samsung’s flagship QLED range, and is now in its third generation, with solid picture performance upgrades compared to previous versions.

It gets its name from its form factor – it is designed to look like a picture frame, with a wooden bezel around the outside in place of Samsung’s usual metallic trim. This comes in black as standard, but there are various other colours you can buy separately, including white, grey, light or dark wood and burgundy.

While The Frame can be positioned on the rather simple (and not that stylish) included stand if you wish, you will really get the full impact of it if you mount it on the wall using the No Gap TV bracket that it comes with. This does exactly what it says on the tin and mounts the TV flush to the wall – just like a picture would be.

However, what really sets it apart from other TVs is Samsung’s Art Mode, which you can select when you’re not watching it. This brings up a whole host artwork to choose from that you can have displayed on the screen, to make it look like a painting. There is a good choice available for free, but you can unlock more with a monthly subscription to the Art Store for £3.99 – don’t forget to use up your three month free trial first though.

Of course, this illusion would all be shattered if you had stacks of wires coming from the TV, but Samsung has thought of that too. The OneConnect box, which you can hide away in a cupboard is where you connect all your cables. That includes power and any HDMI cables from your Sky box or game console, with one slim “invisible” cable (it’s clear but invisible might be pushing it) that connects all of that to your TV.

It’s worth noting that Art Mode is different to the Ambient Mode that you’ll find on other QLED sets, including the Serif. While Ambient Mode attempts to blend your TV in with your decor by mimicking its surroundings (to varying success), it can also show you a calendar or news headlines. Art Mode focuses on just art.

Ambient Mode much more power hungry than Art Mode too, meaning it’s probably not something that you’d want to use all day, whereas Art Mode is intended to be.

How easy is The Frame to set up?

Like all Samsung TVs, getting The Frame set up is nice and simple. You can do it using your remote, or by downloading the Smart Things app and entering the various details, such as your wi-fi password, there. You are walked through every step so there’s very little room for error, but you are left to your own devices when it comes to setting up how you want the picture to look.

From an accuracy point of view, you’ll want to select the Movie picture mode and go from there, though some people prefer the brighter, whiter tones to Standard. Whatever you choose, we would recommend steering clear of Dynamic - while its bold, bright colours can be appealing at first, it looks far too unrealistic for sustained viewing.

We also prefer to set most of the picture processing to off or low settings, but play around with it yourself and see what you like the look of.

Perhaps the trickiest part of the whole setup is mounting the screen on your wall. Samsung includes a paper template to help you to drill the holes required, but just be sure you have the right fittings for the wall. If you’re in any doubt at all, it’s best to speak to a professional.

Who will The Frame suit?

The Frame is aimed at people who want to watch TV, but don’t want a TV to ruin the look of their room when it’s off - having a big black rectangle in the corner isn’t exactly the most stylish of room accessories.

It doesn’t offer the best picture performance for the money, but it does offer a very clever, stylish solution for people who don’t want a TV to be the primary focus of the room at all times. Even better, it’s now available in more screen sizes than ever - in 43in, 49in, 55in and 65in, with new 32in and 75in announced as coming in 2020, to suit even more rooms.

How does The Frame perform?

Good - but not great - picture performance

While this generation of The Frame has had some decent picture upgrades compared with previous iterations – using Samsung’s very best QLED picture tech is a biggie – it still isn’t the very best picture you can get at this price. For some people, the clever design more than makes up for this, but it’s still something that needs to be mentioned.

We’d put its performance on par with the Samsung Q60 – the entry level set of Samsung’s QLED range, which is available for £400 cheaper than The Frame at the 55in screen size. It’s also a very similar performance as the one that we saw on the Serif.

That means you can expect an edge-lit LCD display, one of the cheaper ways to light a display - in better quality screens you’ll get a full array backlight across the whole screen. This allows it to be more accurate on the areas of a screen that need to be dark and light at any one time, offering better contrast and better HDR performance.

However, with bragging rights of 100% colour volume, colours are still really vivid, detail levels are great and outlines are beautifully defined. Feed this 4K content from Netflix or similar, and you’ll see this set at its very best, but even with standard HD TV, your shows will looks great.

Ok, so while unassuming guests will probably be fooled into thinking this could be a bit of art, once you know, you can tell that it isn’t. But it is pretty convincing all the same. Reflections are kept to a minimum thanks to an anti-reflection filter, and it also adjusts brightness automatically to suit its environment, thanks to a light sensor. This means it isn’t blaring out a bright image in a dark room, which would really give the game away, and instead creates a more natural illumination.

There’s also a built-in motion sensor, meaning The Frame will also switch off entirely when it doesn’t notice any movement in the room after a certain amount of time. You can choose whether to have this on and adjust it to suit your needs, but it will save you energy if you do – even though Art Mode is very energy efficient compared with having the TV on.

I found the included artwork more than enough for my needs, but if you’re a big art fan or are keen on having a large selection to suit a certain colour scheme or theme, the Art Store might be worth a subscription. You can search by subject, colour or medium, to name a few, or alternatively use your own snaps instead.

Aside from being something of a chameleon with its picture frame design, the more practical touches that Samsung has included on The Frame are also worth a hat tip.

For example, the clever use of the OneConnect box and Near-Invisible Cable really helps to keep things looking smart, and we’re also big fans of the No Gap wall mount. How close this TV can get to the wall is very impressive indeed, while still offering enough tilt to get the right viewing angle if required.

Just make sure you do wall mount it. You’ll miss a large part of this TV’s charm if you use it on its stand.

Samsung TVs are built on the company’s own operating system – Tizen OS – and it’s one of the best ones you can find. It has pretty much every app for video on demand that you’ll want, from BBC iPlayer and ITV Player to Netflix and Amazon Prime Video in 4K. There’s even the new Apple TV app, so you’re unlikely to find yourself wanting.

On top of that, it’s really easy to use. Bring up the home menu and a bar will appear along the bottom of the screen with all the available apps. If you select one, another bar appears above it with recommended and featured content, making it really easy to discover a new box set without interrupting what you’re currently watching.

There are also three favourites available directly from the remote - Netflix, Prime Video and Rakuten TV.

While the Serif has that chunky surround to contain more powerful speakers, the Frame doesn’t. This means there’s only 40W of downward firing sound - enough for general telly watching but it isn’t going to do your action movies justice.

Samsung does include its Intelligent Mode on The Frame, which recognises what is playing and adjusts its sound to suit but it can still only work with what’s on board, and bass is lacking. To get a bit more oomph behind those explosions, you’re going to want to find space for a soundbar.

Browse our pick of the best soundbars.

Take your pick with voice control

Since Samsung TVs now play nice with both Google Assistant and Amazon Alexa, you can make some basic voice commands via a Google Home or Amazon Echo speaker. However you’ll get the best voice experience by using Samsung’s own Bixby voice assistant, built right into the TV.

It’s still not quite as clever as the competition at their best, but it’s learning more all the time - currently it can open apps, change source, channel or volume, control content playback or turn on Art Mode. Just press the microphone button on the remote and start chatting.

It’s hard not to be impressed by the Frame’s design – from end to end it’s a unique and clever proposition that’s been brilliantly executed. Plus now it’s available in even more screen sizes, there’s one to suit all types and sizes of room.

The price-to-performance ratio is off compared with other TVs on the market, which is something that often happens when design is a focus. While that means this is probably not a TV for home cinema fanatics, it still provides a good performance for those that will find its design appealing.

A cleverly designed TV for people who’d really rather not have one. It’s not the best picture performance for the money, but its design is ultimately what will sell it to people – and those people will love it.