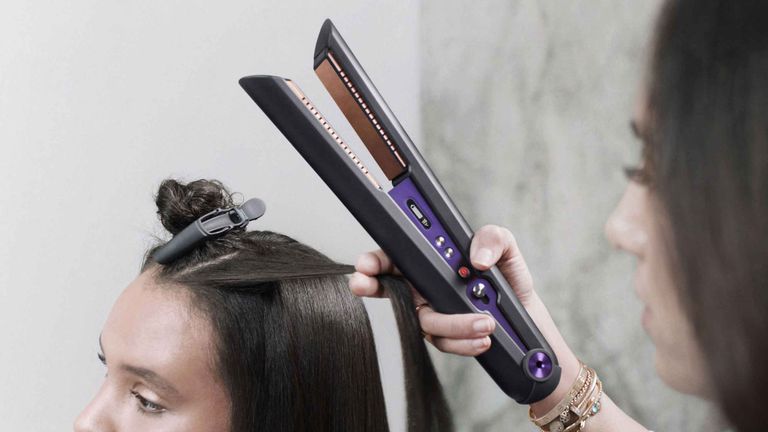 The Dyson Corrale is great: it's cordless, has three heat settings and the technology inside is unbeatable. But... the hefty price tag might make you think twice

Head over to our best hair straighteners buying guide for more recommendations.

The Dyson Corrale can be used corded or cordless, your choice. This makes it much easier to style your hair on the move, and if your dressing table or mirror is nowhere near a plug socket, there's no need to worry.

It can also be charged up while you're using it. It has a 360º swivel cord that can be plugged into the bottom of the straightener, or, you can charge it through the stand (our preference). We think it's a lot easier to use the Dyson Corrale cordless although you will obviously be able to use them longer if they are charging while in use. There are no changes in performance whether you use them corded or cordless.

Admittedly, the Dyson Corrale is heavier than other hair straighteners we've tested because of the weight of the battery– but it's not so heavy that it gives you arm ache like bulkier hair dryers do.

A negative? It can't stand up on its side like GHDs can – you need to use the stand provided, which is a bit of a fiddle (if you're new to hair straightening, you need to keep putting the straighteners down to section your hair – and putting these anywhere but into their stand risks burning your table top). A small, but annoying, design issue.

Another thing we did notice is that the Dyson Corrale does not sound great when used on split ends. GHDs do not make this sound... On the upside, the noise is a good reminder not to use straighteners on damaged hair, and to get a haircut.

Other than the issue with the stand, the Dyson Corrale hair straightener is a delight to use. We found we had to use less pressure to clamp hair in between the plates and, even at a low temperature, it can still do the job well.

And this is where the stand comes in: the idea is that, after every use you pop the hair straightener on its stand which, if plugged in, will charge it – so, in theory, you should never flatten the battery while you're using them.

The Dyson Corrale features a safety lock button to clamp the plates closed after use. This can prevent little ones from touching and burning their hands. It's also a great feature to help make the hair straightener's footprint a little smaller. Since this hair straightener is cordless, it will run out of charge and turn off after 30 minutes, whether it's being used or not. This can be seen as an added beneficial safety feature.

How did the Dyson Corrale perform?

The Dyson Corrale straightened our tester's hair effectively at 165ºC – and it stayed straight for a good while. Bearing in mind that most hair straighteners without heat setting choices will automatically heat to 185ºC, that's good news.

The Dyson Corrale is good for flyaway hair, and it works well with extensions, too. As for curling, the flexing plates make that job easy. (FYI: they don't actually bend, as we learnt after five confusing minutes of trying to bend them.) Instead, these plates make the movement of your hair through the plates a lot easier as they don't touch and clamp, they gather.

The only thing we will say about the Dyson Corrale is that since it's a bulky hair straightener, it can be quite tricky to catch very fine, new growth, or short hair.

All in all, though, there is no doubt that the Dyson Corrale works as well as, if not better than, corded hair straighteners. The technology truly is incredible.

While we highly rate the cordless feature of the Dyson Corrale – it has proven itself so handy – and the differing temperature settings, we do have to bear in mind the high price tag. GHDs offer the same finish on hair and they are much more budget friendly. That said, if money is no object and you'd much rather have the flexibility and temperature adjustability, you can't go wrong.