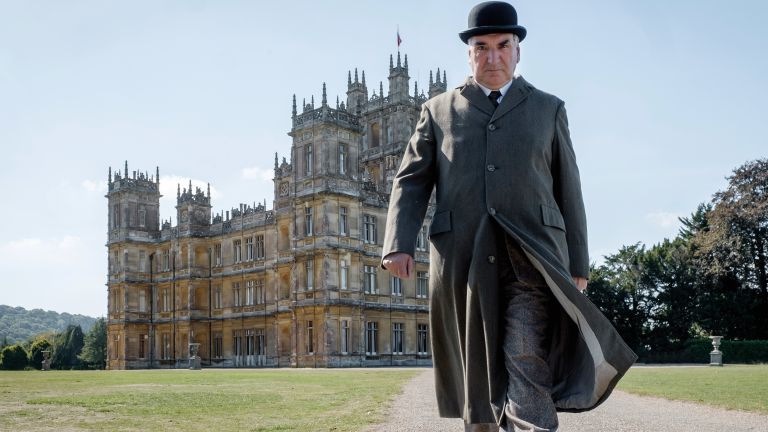 There has been a huge, stately home-size hole in our lives since 2015, when fans of  TV drama Downton Abbey watched its Christmas Day finale and had to come to terms with the fact that it was all over. Over, that is, until its silver screen debut, with Downton Abbey the movie released today.

It was a natural progression for the TV series, says the film’s director Michael Engler: ‘The world of Downton Abbey, even on television, was a very cinematic experience because of the scale, the locations, the period, and so many things about it. There was always an inherent possibility for a large-scale cinematic event.’

Engler had previously directed four episodes of the TV series, including that Christmas finale, so is well placed to comment on how making Downton for a film compares with making it for television. ‘The process is essentially identical. Again, it has to do with scale. Because in the film you have so many of these bigger pageantry kind of things, you spend more time on them and you have more resources to spend on them,’ he says. ‘So in that way it felt different and that was what helped make it feel bigger, but it’s not like you do a different set of things when you’re filmmaking for cinema.’

We pick up the story in 1927, a year to 18 months after the events of the TV finale when Anna and Bates became parents, Mary found out she was pregnant, and Bertie and Edith had just married. ‘The movie moves everybody forward,’ says Engler. ‘There are things we’ve known about and things that haven’t changed much at all.’ One event, however, is about to change everything: the impending royal visit from King George V and Queen Mary.

The whole household, upstairs and downstairs, is in a spin preparing for the royal visit and it adds an interesting twist to Downton’s norms of class. ‘It’s a world where the top of society is pretty much defined by the Earl of Grantham, the Countess and the Dowager Countess, and that already has a scale, grace and glamour to it – and privilege,’ says Engler. ‘But when the king and queen come to Downton Abbey, with everything that entails in terms of what the house has to become and provide, what protocol is expected, and what meals and ceremonies take place, it takes what’s there, in the world of Downton Abbey, and by the virtue of the story itself raises the scale to the level of king and queen from the level of earl and countess.’

This upheaval in Downton’s pecking order won’t be lost on fans of the series, but what about people who have never watched Downton on TV? There’s plenty in the film to entertain and engage them too, says Engler. ‘What creator Julian Fellowes has done brilliantly is make it feel like one whole, complete story that could exist without the series. So the story itself would not be lost on anyone who wasn’t a big fan,’ he assures. ‘Of course, the more you know about Downton, and its characters and back story, the richer the experience and the more complex it will be, and there are little callbacks to things about the series that you’ll appreciate. But unlike the series, it accounts for everybody’s stories. In the TV series, each week some people’s stories come to the foreground and others shift to the background; in the film you had to have one overarching story with a beginning, a middle and an end. And within that you have all the 20 characters and their little arcs and what they go through during this time period in the film.

‘This is something the movie does really well, balancing those two things out and making them both feel whole – even the little ones have a beginning, a middle and some sort of an end – everything is tied up in a bow, but you feel that somebody went through a process in this period.’

As to the details of the plot, there was no persuading Michael Engler to get anywhere close to a spoiler alert. He simply promises that the story will contain ‘all the things you love about Downton – so romance, some comedy, some intrigue, jealousies and crushes, everything! It’s the same mixture, but with a new story.’ Just knowing that will be more than enough for Downton super fans.

One aspect of making this film that eased the way for Engler was that in working with this long-established cast he was dealing with actors who know every facet of their character’s personality. ‘When we’re talking about a scene or storyline, there is that assumption that they know who their character is,’ he says. ‘Sometimes it’s about filling in the missing pieces, working through just how much the character knows when. So even though they know all about their characters, it’s still about how exactly does everybody fit into the bigger story, at every moment. Each of them finding their balance and their separate journeys through it and how they all interact and intercept.’

In a cast of so many experienced actors, there’s one who stands out as perhaps equally tricky to deal with out of character as she is in character. One imagines directing Dame Maggie Smith could either be tough or a dream.

‘She’s a tough dream!’ laughs Engler. ‘She’s so smart, so sharp, and as curious and interested as an actor as any I’ve ever worked with. Every scene, every line, every piece of behaviour is very specifically and carefully examined, and I love that and I appreciate it, and she and I had a mutual appreciation for those kinds of questions and how you answer them together.

‘And she’s got one of the great wits of anybody I know of any age. Yes, she doesn’t suffer fools and I wouldn’t expect her to, but she’s not someone who’s looking for a difficult time; she works hard and she expects everyone to work hard. And because there were a lot of familiar people who she enjoyed working with and had missed, I think she did genuinely enjoy it.

‘There’s something about the Dowager Countess that even though Dame Maggie always talks like she’s over it, I think she still loves being able to play around in that character, because it allows her to play with her own kind of magisterial mischief. Those are definitely two adjectives that I would say describe her: magisterial and mischievous.’

Mischief aside, what was the atmosphere like on set with actors who worked together for years on the series and then had a few years’ break? Did it feel at the start like a big reunion?

‘From start to finish it felt like a big reunion. That’s the thing about this show. There’s so many people and so many different combinations, that sometimes you’ll work for a week in some house in Yorkshire somewhere with a dozen people, and then you come into town and work on the downstairs set and it’s a completely different group of people. So there was really a sense of little companies within companies,’ says Engler.

‘The actors knew when they were in the middle of it that it was something really special. It felt special to make it, they loved making it and the world really appreciated it and told them so. It’s nice when that happens and everyone knows it’s rare, so when they got this opportunity to come back together, I think they all relished it, and it was an extremely joyous and relaxed and fun set.’

There’s no doubting the worldwide appeal of Downton, which by its second series in 2011 was being aired in more than 100 countries. But what is it about this period of English history and this story that makes it so universally compelling?

‘There’s a fascination for this elegant, orderly luxurious world – that’s a big part of its appeal,’ says Engler. ‘Also, in the discombobulated rancorous, culture we live in now, a lot of people don’t know where they fit in, and there’s something reassuring about Downton Abbey where people know where they fit in. Sometimes that feels like prison and sometimes it’s an opportunity – it can be both – but wherever you are in that society there’s a sense that you know where you are and you work from there.’

Are there any parallels between the world of Downton Abbey and our modern world? ‘In a funny way, it’s the fact of how different it is that might be the most relevant point,’ says Engler. ‘There was a different kind of order and decorum back then. And I think Julian Fellowes is asking legitimately, was that good? Does it make sense in the modern world? That is the main question the film deals with. There is this life that they all live and it’s glamorous, beautiful, lovely and historical, but does it make sense any more, is it worth it?’

For Downton fans, the answer is obvious – of course it’s worth it. Now we’ve finally got a full-length feature film, is there a chance of sequels, or is this definitely the end of Downton Abbey? ‘I have no idea. I think there could be another,’ says Engler, ‘but that’s only because of gossip, not because of anything I know.’ So with this hint of possible return visits to Downton, let’s enjoy the spectacle, like Mrs Patmore: ‘A royal luncheon, a parade, and a dinner! I’m going to have to sit down.’

Downton Abbey is in UK cinemas from 13 September