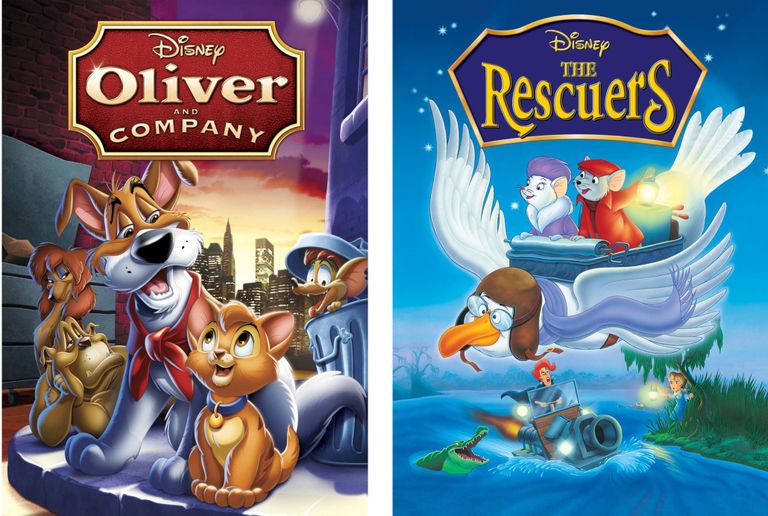 Old school Disney+ movies might just be what gets us through the next few months.

There's something comforting about hearkening back to our childhoods in a time of total unknown, and what better way to do that than with all of the Disney movies we totally forgot we loved as kids? Disney is currently offering all of its movies through Disney+ (if you're already subscribed, you'll find great suggestions in 'The Vault' category. If you're not subscribed, get on that here or keep scrolling).

In addition to the obvious classics like Aladdin, Beauty & The Beast, and The Lion King, we found a whole bunch of movies we'd completely forgotten about that made our inner children downright giddy when we re-discovered them.

So grab your popcorn (or your Jujubees), because here are five of the movies, all currently on Disney+ right now, that'll instantly have you feeling like a kid again.

The Rescuers, which follows two mice from the Rescue Aid Society as they try to free a little girl named Penny from the Devil's Bayou, was originally released in 1977. It was followed by the sequel, The Rescuers Down Under, released in 1990 (which explains why, when we turned it on, we were instantly flooded with memories of The Rescuers-themed Happy Meal toys). Both are currently available on Disney+.

How we forgot about a movie that starred Billie Joel is beyond us, but hey, a lot's taken place between fourth grade and now. This adorable film about a homeless kitten taken under the wing of rough-and-tumble street dog Dodger (voiced by Joel), is fun and heartwarming. And just try not to add "Why Should I Worry" to your Spotify playlist after you finish watching.

This 1970 Disney classic is set in Paris and follows the high-society life of a family of artistocratic cats. After they're kidnapped (which we've now realized seems to be a plot line in about 50 percent of classic Disney movies) by a malevolent butler and stranded in the French countryside, they team up with an alleycat named O'Malley to get back to the city.

A Goofy Movie was probably the only Disney movie that was cool to talk about in middle school. The 1995 cartoon follows Goofy and his reluctant son Max (who'd rather be pursuing his crush, Roxanne) on a father son bonding trip. What starts out as a fishing adventure becomes a jaunt to LA after Max re-routes the trip unbeknownst to his dad so he can see a Powerline concert. Epic.

A classic for sure, but Lady & The Tramp probably wasn't up there with Sleeping Beauty and Pocahontas on your list of most-memorable childhood Disney movies. This tale of Lady, the Tramp, the Darling family, and of course, Tony's Italian Restaurant, is almost more endearing when watching it as an adult (but your kids will love it, too).