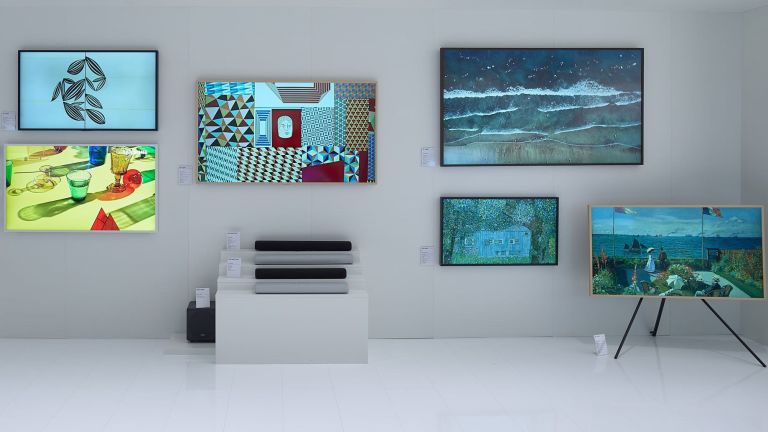 There are several new additions to the television world, and the Samsung new TV additions for 2020 are seriously shaking things up. That's right, Samsung, who make some of the best TVs around have launched their latest QLED 8K TV range – and the results are pretty impressive.

We're going to give you four solid reasons why you should invest, just keep scrolling...

Is Samsung QLED worth the money?

In a nutshell: yes. Offering unprecedented technology and unrivalled viewing experiences, the Samsung QLED 8K TVs can't be beaten for audio-visual quality, AI capabilities, or design. Available in 65, 75 and 85 inch models, these TVs are big, as well as expensive. But if you're looking for the best of the best, look no further. Keep reading to discover exactly what this new collection has to offer beyond the ability to sit down and enjoy your favourite series. Available later in 2020.

1. A television that rotates

You heard it here first, kids. Samsung have created a television that rotates. Really. Now, we're either missing the boat, or this is something that's never been seen before.

The Sero is what Samsung are describing as a 'lifestyle' TV. Capable of rotating between vertical and horizontal orientations (kind of like a smart phone) this television is designed to allow you to enjoy content in the best format possible. This is all part of their move towards 'TV personalisation,' says Nathan Sheffield, Head of TV and Sound Devices, Samsung Europe.

You've likely heard us talking about the problem with super slim televisions, and the need for additional soundbars, or surround sound systems on account of their slender profiles. Well, Samsung have done what Samsung do best, and designed their way around this issue.

Despite a stunningly slim 15mm profile, Samsung's QLED 8K TVs also boast six built in speakers, which means you won't have to worry about poor sound quality ever again.

4. Built in AI for the ultimate smart television experience

Smart TVs are pretty much the norm, at this point. But Samsung are going above and beyond anything we've seen previously with enhances ‘Smart Screen’ AI capabilities. Some of the most notable include:

By analysing light conditions, it's now possible to ensure perfect picture quality regardless of whether the TV is being watched in a bright or dark room. That means no more glare if you're watching a film on a sunny afternoon.

We've all experienced the frustration of trying to watch a film, or TV series, when everyone around us is chatting. Well, what if we told you that Active Voice Amplifier recognises distractions to your viewing experience and adjusts clarity accordingly.