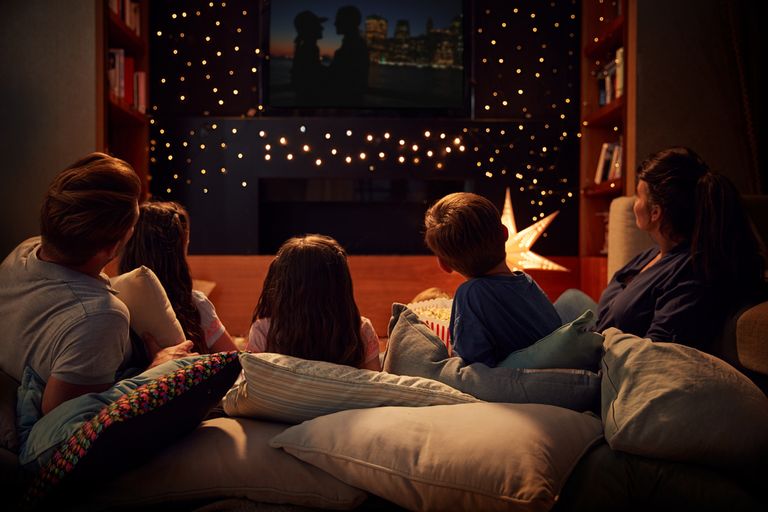 The best films on Netflix are about to get a lot of extra views. As coronavirus makes heading to the cinema an unwise choice, we need to get our movie fix at home – thanks to Netflix, that won't be too tricky.

We have rounded up the best films on Netflix to boredom bust your way through self-isolation. There is something for every age and every movie fan on our list. From uplifting family favourites to apocalyptic dystopias that might feel a little too close to the bone right now, you will find plenty to choose from.

Not got Netflix and deciding whether to subscribe? See our pick of the best streaming services.

Netflix has so many of those films that you think everyone but you has seen. From big budget Hollywood epics, to those thought-provoking hits that people are always telling you to watch, find a crowdpleaser below.

A classic that everyone needs to watch once (then again, and again, and again) stars Bill Murray as a weatherman stuck in a seemingly infinite loop covering the same day – Groundhog Day or 2nd February. It is your somewhat predictable story of a selfish, horrible man turning good from being put in a bad situation, but it is funny, well-cast and a must-see.

Everyone who hasn't watched Ghost thinks they have because of that scene with the potter's wheel. But for all the parodies, this is a actually a clever film about a romance that transcends the living world. And it has Whoopi Goldberg in who we love.

Dallas Buyers Club is the true story of a Texan rodeo cowboy, Ron Woodroof, taking on big pharma and the unfairness of the American health system. Set in 1985, Ron (played by Matthew McConaughey) must not only face an AIDS diagnosis, but all of the isolation and misinformation that comes with it. Ostracised by family and friends, he finds purpose dealing a cocktail of unapproved drugs and nutritional supplements at local gay bars – drugs that have considerably extended his 30 day life expectancy. It is heartbreaking in places, but seeing people based on true to life characters overcoming prejudice and tragedy is uplifting, too.

A dark, dystopian, adventure film which presents a world in which a totalitarian state dictates and makes teenagers fight to the death for TV entertainment. The Hunger Games film was released in 2012, based on a novel by Suzanne Collins, and was snatched up immediately by an audience of all ages. Exposing the dark underbelly of reality TV in a way that is palatable and accessible to a young audience was what gained this film a whole load of Teen's Choice Awards (as well as MTV and People's Choice awards). Basically, it's a must-watch and Netflix is here to help.

Set in a Beverly Hills high school, Clueless is centred around our hapless heroine Cher who is on a mission to help a fellow student with a series of fashion and life makeovers. Loosely based on Jane Austen's Emma, the film pokes fun at the social hierarchy of highschool (and the world beyond it) for an off-beat comedy with a stellar cast. Young Paul Rudd is our highlight.

Based on the true story and memoir of Saroo Brierley (A Long Way Home), Lion is a film which follows the riveting and tragic story of a young man who goes on a quest to find his family in India from whom he was separated 25 years earlier. It is brilliantly acted and powerfully impactful; Dev Patel portrays the sentiment of displacement captured in Brierley's novel so well, showing that despite living a life of comfort and happiness, his character cannot be at peace until he comes to understand the true meaning of the word 'home'. It'll bring you to tears!

Jennifer Lawrence and Javier Bardem play a couple whose life is torn apart by a series of uninvited guests. The story is set in a beautiful home they are renovating, but from the first minute there is a tense atmosphere you can't shake, that only gets tenser throughout. If you love a thriller this is just that – but really set apart from your standard psychopath or unknown villain fare.

Richard Curtis fills his films with characters he "knows and likes", which is what makes this film such a cosy, feel-good choice. Being let in on the secret of time travel by his father (Bill Nighy), the main character of this film uses his new-found capacity to find love. It's silly and it's lovely, as are all of the best RomComs (and Richard Curtis' are famously the best of the best). You'll laugh and cry in equal, light-hearted measure and that's why this is the movie for a rainy day... 'cos let's face it, you've been scrolling for an eternity to find one.

Netflix not only champions independent film makers, but creates a platform for films that may have had limited box-office appeal but are still well worth a watch. They might not have the shiny budgets of some of the above, but they still deserve the accolades.

Sincerely acted by Scarlett Johansson and Adam Driver, Marriage Story features a divorcing couple trying to keep their family together, while the legal system encourages them to pull it apart. It is the very opposite of a RomCom, but within it are moments that are truly romantic and quite funny. Probably not one to watch after being stuck inside with your spouse for too long mind you...

A terrifying pandemic (we said some were a bit close to the bone) means a father must battle to ensure his daughter survives. Martin Freeman plays the lead in this and is incredibly adept at taking you on every painstaking tragedy that hits him in the journey.

This Oscar winner follows the life of a young domestic worker living in a turbulent 1970s Mexico. Love, betrayal, poverty and politics are all covered as part of the fairly simple storyline. It is all black and white – each scene a cinematic wonder that doesn't need colour as the characters really pull you in, so be set for an emotional rollercoaster.

Two neighbours navigate a terminal illness diagnosis and what ensues is not a tale of doom and sadness, but the most uplifting story of friendship. Starring Ray Romano and Mark Duplass, Paddleton is often laugh out loud funny, but the description of a 'bittersweet bromance' sums it up pretty well. Give it a go – it is one hour and 29 minutes you won't regret.

In Italy in the 1980's, Elio (played by Timothée Chalamet) falls for his father's research assistant (played by Armie Hammer) who is staying with them for the summer. A coming of age film with a stunning soundtrack –thanks Sufjan Stevens – beautiful scenery and a life-changing crush, Call Me By Your Name is more sophisticated than your average teen love story.

Christian Bale, Steve Carell and Ryan Gosling play a group of finance experts who pre-empt the recession of the mid-2000s, betting against the banks and as a result, becoming filthy rich. It isn't your typical Hollywood style hustle movie – anyone genuinely interested in how and why the US faced an economic crash during a time it should be flourishing, will learn a lot. It is witty, funny and don't let the educational element put you off as it is incredibly entertaining.

A videographer accepts a job filming a client (Mark Duplass) in a remote lodge. He soon starts to feel uncomfortable with some of the client's requests – as does the viewer. And we will leave it at that. I have never laughed so uncomfortably at a film. It is rated 15 so that will give you some indication of what could be involved, but Creep keeps you on your toes until the last minute. A brilliant indie film that deserves far more recognition than it has.

Looking for a Netflix film the whole family can enjoy? Then look no further.

When all seems wrong in the world, My Neighbor Totoro is an hour and a half of loveliness and slightly mad escapism. It tells the tale of two young girls who have just moved to the Japanese countryside to be closer to their ill mother. They befriend a strange creature (apparently a troll but looks like a massive rabbit) called Totoro and magical adventures ensue. It's a bit silly, it's a bit childish, but it is very very sweet and like all Studio Ghibli offerings, it is well drawn and scored.

If you like this, follow it up with Spirited Away which has just been added – another fantasy tale from Studio Ghibli.

The film you need is Nanny McPhee. (Ha... you'll get it when you watch the film). If there was ever a duvet-day that will have the kids giggling without having you snoring, it's this high-spirited fairytale like story featuring Colin Firth, Emma Thompson and a whole load of naughty children. Emma Thompson plays the wart-ridden old super-Nanny, employed by magic to teach Firth's unruly gaggle of mad children how to behave. The plot contains magic, laughter and bonkers kids... probably somewhat like your own home. As children's films go, you shouldn't miss this one.

Shrek is one of those films that is loved by all ages. When it came out, believed to be intended for children, many parents were sat with their little ones howling with laughter (at all the bits made for the kids not to clock onto). We're delighted to inform you that you can enjoy a Shrek movie marathon, if you so wish, because the cynical but lovable Ogre (Mike Myers) and his hilarious companion, Donkey (voiced by Eddie Murphy) have graced the Netflix movie list. This fairy tale parody will have you laughing and crying and begging for more... which is why we're so glad that Netflix also has Shrek 2, Shrek the Third and Shrek Forever After.