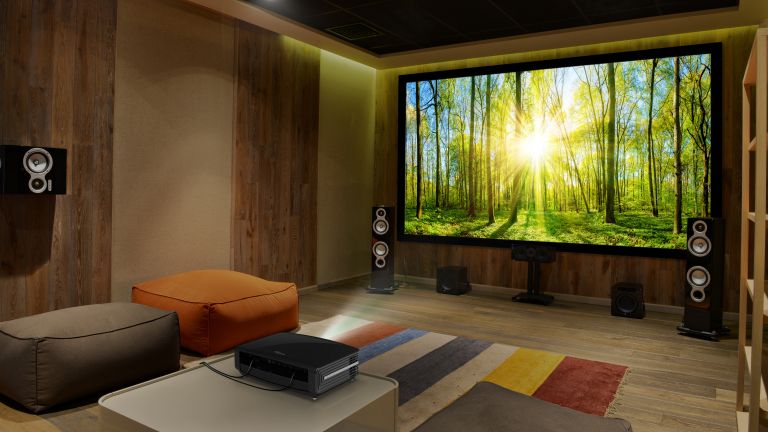 Projectors give you what TVs can't: an epic home cinema experience – at an affordable price. So, while a 65-inch TV seems to be the limit before things start getting obscenely expensive, it's not uncommon for projectors to be able to fill a screen that's 100-inches or larger, without breaking the bank.

Better still, they're able to create this massive screen using a fraction of the bulk of a traditional TV. Just set up a projection screen of the required size, set the projector on a stable surface, and you should be good to go. Read on for our buying guide of the best projectors available in 2018.

What to consider when buying a projector

Projectors come with their own set of downsides, which are worth running through before you rush out in search of ever-gigantic screen sizes. The first is that while projectors make large screen sizes cheaper than ever, getting them at high resolutions still commands a price premium that's much higher than equivalent TVs.

While 4K TVs can now be had for budget prices, their projector equivalents tend to cost in excess of a grand, and that's for a budget 4K experience.

Second is the fact that if you're investing in a projector then you almost certainly going to need to buy a set of external speakers. While most projectors include a set of speakers in their housing, we've generally found these to be equivalent to those you might find in a laptop. They sound cheap, they sound tinny, and they don't sound like something you want to enjoy the latest Hollywood blockbusters with.

Finally, there are noise and heat concerns with projectors that simply don't exist with TVs. Projectors get hot while they run, and that means that you'll need to leave them in a well-ventilated position and, more importantly, be prepared to deal with a certain amount of fan noise.

Finally, a 4K projector that won't financially ruin you

At close to $2,000 describing the Optoma UHD60 as 'affordable' feels like a stretch, but in the world of 4K HDR projectors that price makes it an absolute steal.

More surprising still is the fact that the quality of its image is as decent as it is at this price. 4K images are beautifully detailed, while colours are rich and vibrant. But a 4K project that's this affordable inevitably comes with its downsides. Although it supports HDR, the range of brightness isn't quite up there with what TV's are capable of.

Secondly, of its two HDMI inputs only one supports 4K sources, which will be a shame if you're looking to hook up both a 4K games console and an ultra HD Blu-ray player (although here an HDMI splitter or home theatre receiver could be a big help).

But even with these downsides, we think the price to performance ratio of the UHD60 makes it the best projector for most people right now.

If you're not fussed about 4K, but are still prepared to pay decent money for an HD projector, then the Sony Sony VPL-HW45ES is a great step-up option.

It's difficult to measure this step up in functionality though. This is still an HD projector after all, with two HDMI ports, and a decidedly average 1,800 lumens of light output.

But start watching content on the HW45ES and you'll see what the extra money gets you, with fantastic motion handling and great performance across both light and dark areas of an image.

Reviewers have also praised the projector's low input lag, which would make this a great choice if you're planning on doing some gaming on the big screen.

A 4K projector as good as any TV

If the Optoma UH60 is the best bang-for-buck 4K projector you can buy right now, then the Sony VPL-VW550ES shows what projectors can achieve once you leave the idea of affordability behind.

What you're getting here is a fantastically crisp image, even when there's a lot of heavy motion going on in the image. Contrast and brightness is good, but the projector's real strength is in its blacks, which over a lovely amount of depth to the images the projector is capable of.

The only downside this creates is that you'll need to run the projector in high lamp mode for the best HDR images, and there's no way to have the projector automatically enter into this mode when it detects an HDR signal.

Aside from this complaint you can't get much better without getting into the realm of professional equipment not meant for home use. It's not cheap, but the Sony VPL-VW550ES shows the best of what consumer projectors are capable of in 2018.

+Not too much fan noise+Long lamp life

The Optoma HD142X is our second favourite value projector you can buy right now.

It's a shade cheaper than the Epson EH-TW5350 at the number two spot above, but it's got a couple of things going for it that the more expensive Epson lacks.

The first is a fantastically bright 3000 lumens of light output, which means that you won't need to be quite as diligent with making sure that the HD142X is in pitch blackness to get a decent level of picture quality from it.

Second is a refreshingly long 8,000 hour lamp life. The bulbs which provide a projector's image have a finite life, and replacing them can be an expensive prospect, so an 8,000 hour rating should allow you to put off the added expense for as long as possible.

Ultimately, the HD142X loses out to the Epson based on its slightly inferior image quality, but it's still a great piece of kit in its own right.

The Optoma UHD65 is the step up from the UHD60 that sits at the top of our list of the best projectors.

For the extra money you get a better level of contrast, and a range of colours that's just that extra bit wider.

These added improvements come at a price though, with the UHD65 the more expensive of the two projectors by a comfortable margin.

For our money we still think the UHD60 offers the better price to performance ratio of the two models, but if you want to get a marginal boost to picture quality without jumping all the way up to the Sony VPL-VW550ES, then the UHD65 is a great option.