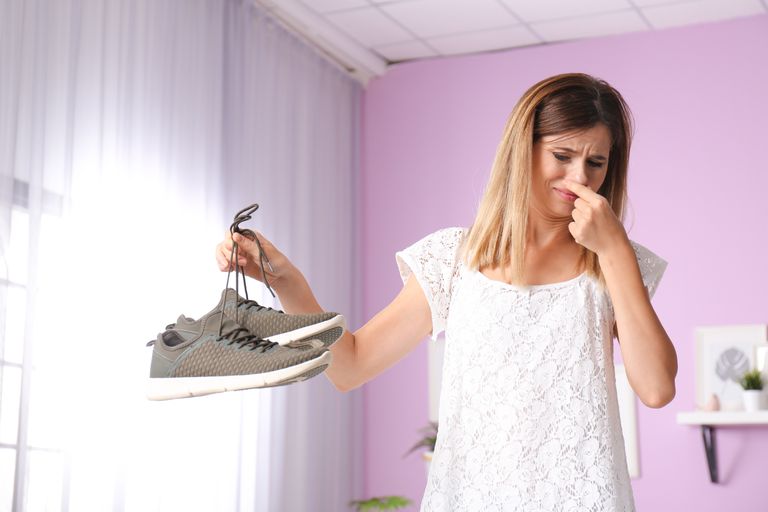 'My house smells musty, what do I do'? This is a question we're regularly asked, especially at this time of year, and if you've Googled it, you've probably come up with the answer that you have mould in your home, and are picturing horrific pictures of black mould spreading over walls.

First of all, it's important to clarify the difference between musty and mouldy smells in the house. While the two words are often used interchangeably, they don't always point to the same root cause.

A mouldy smell is typically sharp and sickly; mould smells 'alive' in the worst possible way, invading your respiratory system straight away. A musty smell, on the other hand, is typically a stale smell, as if something was once wet but is now decaying (lovely thought, that).

And, the good news is, you can track down the smells pretty easily and solve them with good old-fashioned cleaning. Here, we list the most common causes of a musty smell – and their fixes.

1. Your carpet needs a refresh

Carpets are like sponges, absorbing all kinds of smells, particles, and lots and lots of moisture. Even if you vacuum regularly, when the weather turns humid and cool (think right around this time of year), your carpet will be absorbing all the extra moisture in your house. The musty smell results from that moisture 'activating' the dust and bacteria inside your carpet, often including mould spores. The best thing to do is do give your carpet a good deep shampoo, or at least clean it with baking soda. If you have a steam cleaner, that's another great way to get rid of that musty smell.

2. You're leaving your clothes in the washing machine too long

We've all done this at some point: forgot to take out the washing as soon as the washing machine cycle ended. Depending on how long you leave them in there, your clothes will smell anything from slightly damp to unbearable (in which case, you'll have to rewash them). Always take your clothes out to dry as soon as the cycle has finished or tumble dry them. If you have forgotten, and the clothes smell bad, do not attempt to dry them on the radiator: the smell will not go away, and may even get deeper into the clothes.

3. Your wardrobe/chest of drawers doesn't get enough air

If your clothes smell lovely and clean when you put them away or hang them up, but smell musty in a matter of only a week, you have an air ciculation problem. The solution can be to leave the drawers slightly open/wardrobe doors slightly ajar, although it's not the most aesthetically pleasing one. You can also buy some moisture absorbers made from silica and put them in your drawers/hang in the wardrobe. Just make sure pets/children don't find them and try to eat them.

4. Your plants are overwatered

House plants that are getting too much water will eventually succumb to root rot, which, depending on the size of the plant, will impart a smell ranging from musty to full-on mouldy. A sure sign that you're overwatering is water standing in the dish underneath a plant pot or accumulating inside a planter. Another sign is a plant that's losing leaves that seem perfectly healthy, or the leaves are turning yellow. If this is happening, empty the planter/dish, and allow the soil to dry out, then water sparingly. IF the plant does not recover/continues to smell, you'll have to get rid.

5. You upholstery/bedding/mattress need a refresh

Basically, anything made of fabric/feathers/foam that you regularly sit/lie on is going to absorb some moisture from you, mainly in the form of sweat (delightful). Over time, sofas, armchairs, mattresses, and all kinds of textiles (think cushions and throws) will begin to smell a bit funky. With upholstery, you can use the bicarbonate trick (sprinkle, let sit, vacuum up). With mattresses, it's best to use a washable mattress protector or mattress topper, but you can also attempt to clean a mattress.

6. Your dish sponge is past its prime

Don't even get us started on dish sponges: not only are they environmentally unfriendly, but they're also supremely unhygienic, accumulating bacteria and very easily growing mildew and mould. After a while, dish sponges that are regularly left soaking wet in the sink can smell bad enough to stink out your whole kitchen. 'But it's perfectly dry!', some will say. If it smells bad, please, please throw it away, and invest in a silicone dish sponge instead.

Paper absorbs moisture, and all books eventually succumb to that musty 'old book' smell, unless they are stored in climate controlled envrionments. Old paperbacks smell especially strong, but even new books that have spent some time in a basement/storage facility can begin to smell musty too. This is a tricky one: once a book has begun to smell musty, there's not a lot you can do about it. Some people actually like the old musty book smell, but if you aren't one of them, it may be a case of replacing old copies with new ones.

More issues with smells/cleaning? Visit our cleaning hub for loads of advice and tips.