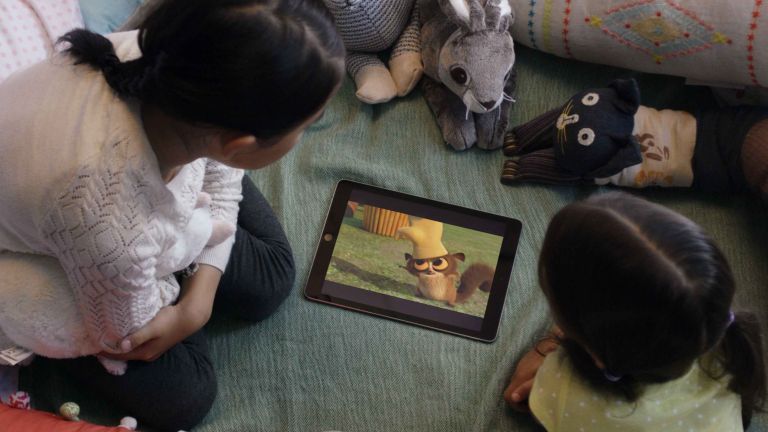 These are the best movies for kids this Easter – but we'll be getting stuck into them too. Some of them aren't strictly Easter films but do feature rabbits and James Corden. The ultimate combo? We think so. Easter is just around the corner, Easter holidays have FINALLY started (no more homeschooling! YAY!) so it's time to get the kids excited.

These films are all available on streaming services Netflix and Disney+ and can be watched over and over and over again until they're fed up. It's better than Paw Patrol or Peppa Pig on repeat. Trust us.

Check out our Easter decorating ideas to help make the occasion even more special. Head over to our health and beauty page for more ways to tackle your Coronavirus cabin fever.

Disney+ | FREE seven day trial
Opt into a Disney plus free trial now and enjoy seven days of the best TV for free. We've not even got to the best part yet – Disney+ subscribers will get access to never seen before movies, series, documentaries and more. Some of our top content picks include the new Lady and the Tramp, Star Wars the Mandalorian, 10 Things I Hate About You, Toy Story 4, and not forgetting Hannah Montanna: The Movie of course.

Netflix | Free 7 day trial
Netflix offer a seven-day free trial so you can try before you buy. And, after that, it's only £5.99 per month. A cheap price for access to the best films, TV shows and documentaries around. There's even a dedicated kids section...View Deal

The minds behind Despicable Me and Alvin and The Chipmunks bring Hop to our screens, AKA the best Easter film to watch with the kids. It's an animation and live-action movie.

There's a new Easter Bunny in town and he doesn't want to deliver eggs. What does he want to do? Become a pop star in Hollywood, of course. What stops him? Fred, a job-hopping slacker who accidentally hits him with his car. Fred takes E.B in to help him recover as the pair become friends and E.B gets the opportunity to perform on David Hasselhoff's show. It's not all good news, though: back in Easter Island, Carlos the Chick plots a coup d'état to take over Easter. Will E.B. get back to the island in time to stop Carlos, or will he follow his dream?

2. Rise of the Guardians

Starring Hugh Jackman, Alec Baldwin, Isla Fisher and Chris Pine, this DreamWorks animation was nominated for a Golden Globe Award for Best Animated Feature Film. It's not just an Easter film. In fact, it features the Easter Bunny, Santa, the Tooth Fairy, The Sandman and Jack Frost all in one film.

This great movie tells the story of three immortal guardians – the Easter Bunny, Santa and the Tooth Fairy – who work to protect children from darkness and despair. They were doing a great job until Pitch Black, an evil boogeyman, manages to wrongly convince the children the three immortal guardians aren't real. Winter comes and Jack Frost gets ready to save the day.

Fun fact: Rise of the Guardians was the last DreamWorks Animation film to be distributed by Paramount Pictures. Oh, and Jude Law stars, too.

So, strictly speaking, Peter Rabbit isn't an Easter film. But, it's about a rabbit and it has James Corden in so it had to make it onto our list. All of your favourite book characters come to life in this heart-warming movie – Benjamin Button, Jemima Puddle-Duck, Mr. Tod and more. The little ones will love it.

You know how it goes: Peter Rabbit and his three sisters couldn't think of a better way to spend their time than hopping around Mr.Mc Gregor's garden and stealing his vegetables. That is until disaster strikes and one of Mr. McGregor's relative's moves into his house and kicks all the animals out. He also goes as far as upgrading the garden security so they can't steal fruit and veg. A conflict begins. Who will win? The human or the rabbits...

This Winnie the Pooh movie is set at Easter time and features character favourites from Roo to Piglet, Tigger, Eeyore and more.

It's Easter morning and as Roo, Pooh, Tigger, Piglet and Eeyore arrive at Rabbit's house, ready for the celebrations, they're shocked to be greeted by an unexcited Rabbit. Instead of an Easter party, they're tasked with the job of spring cleaning. This 'Spring Cleaning Day' now replaces Easter. Unimpressed, the five guests try and convince Rabbit to let the Hundred Acre Wood Easter celebration happen. Taking no for an answer, Rabbit stubbornly returns home and goes to bed. Will Pooh, Piglet, Roo, Tigger and Eeyore get the Easter they'd hoped for? Or will they spend every Easter from now, cleaning? We certainly hope it's the former.

Pop this on your TV to finally get some quiet time to do your own spring clean.

Where to watch: Disney +.

5. Wallace & Gromit: The Curse of the Were-Rabbit

Wallace & Gromit fan? This is the ultimate Easter film. It'll make the kids laugh and you may actually enjoy it, too. It even won an Oscar for Best Animated Feature if that helps convince you more.

Following Wallace, a cheese-loving inventor and his silent dog Gromit, this movie sees the pair become pest control agents to protect the townspeople's fruit and vegetables from rabbits. They capture the rabbits and use their "Mind Manipulation-O-Matic" machine to brainwash them so they no longer want to eat fruit and veg. The only issue? The Were-Rabbit. This large rabbit is destroying gardens left, right and centre and creating chaos ahead of the town's annual fruit and veg competition. How will they catch it?

Not only does this movie star Ralph Fiennes, but also Helena Bonham Carter and Peter Kay to name drop a few more.