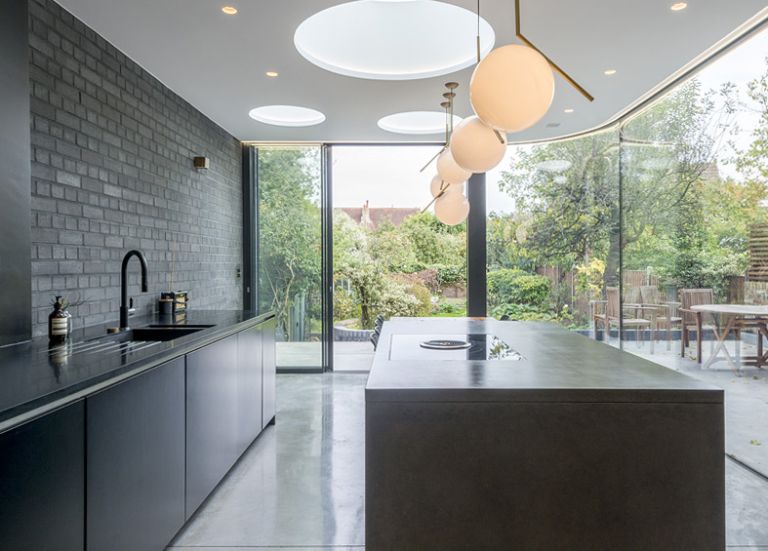 Designing an extension doesn't just cover how the extension's interior will look when completed; it also encompasses details such as the roof's structure and height; the exterior materials used; door and window construction; and the extension's footprint. Here, we cover everything you need to know about the practicalities – and, the fun bit, the extension's aesthetics.

Jump straight to the section that interests you

It's important to ensure that your extension's design suits your needs during the planning process, as it can be costly to make changes further down the line. There are many options to consider, including:

Designing an extension: defining its footprint

There are few limits on the size of your extension’s floor area unless it’s likely to cover more than half the garden (including any existing extensions and outbuildings). However, bear in mind that any extension that does swallow up a significant proportion of usable garden space may affect your home's future saleability.

Designing an extension: deciding on its height

You’re not normally allowed to build higher than the existing house. However, side-extension roofs and walls often need to be set back slightly from it (perhaps by 10cm to 15cm). Ensure that your extension's roof design flatters that of the original house – whether through matching materials, echoed roof lines or even through contrast. This part of your extension's design will be looked at closely by planners.

Don't think about your extension in terms of adding the maximum size you can fit in – or are permitted to. Instead, consider exactly what you need for your extension and how you want it to feel. Often, over-sized extensions lead to over-sized rooms – usually kitchen diners – that feel unwelcoming and overly spacious. It's better to get the perfect floor plan laid out, then work backwards to ensure the extension's footprint is the right size for both your needs and the plot.

Designing an extension: matching it with your existing home

Choosing contrasting materials for extensions is sometimes more acceptable to planning departments and an architect can help with this, but make sure the contrast is complementary and not grating visually.

‘There are no hard-and-fast rules on what materials will be accepted by the planning office. It depends on the building, the area, local planning policy, and you – the homeowner,’ says Hugo Tugman.

‘It used to be that planners generally wanted extensions to be in keeping with the original building, which led to a rash of pastiche additions to older buildings, but these days there is more and more of a prevailing view that allowing an original building to be itself.

‘Contrast does not have to mean shiny modern or hi-tech. It is generally a good idea when extending an old building for the extension to play a quieter role to that of the original building, and it is quite possible to produce a relatively contemporary design that is modest and calm in its expression.’

Inside, try to think of your furniture choices for the interior and exterior together. ‘Choosing matching finishes, colours and textures for outdoor and indoor furniture is a great way to keep a coherent look that flows from within the home and out into the garden or patio, for example,’ says John Sims Hilditch, co-founder of Neptune.

Adding bespoke elements to an extension

Adding bespoke elements to an extension doesn’t come cheap. Because they’re produced individually rather than available off the shelf, they’re more expensive to manufacture, or might involve the skills of an individual artisan. Thus they can be subject to delays, holding up your building project. However, it’s worth paying the premium since they can add massive appeal to an extension, both practically and visually.

Expect to pay more for bespoke solutions such as the outstanding metal-framed curve of glazing on this extension by Ar’Chic (above and below), which also includes circular rooflights, a green meadow on the roof and bespoke kitchen joinery. A similar project would cost around £190,000.

Designing an extension: getting the interior right

Ensuring the extension feels like part of the original house – or like a wonderful addition – rather than something that's awkwardly bolted on is vital, and this will be most noticeable from inside. Renovations expert Michael Holmes suggests the following expert tips so you can get this right:

Maximise the opening between the existing space and new

The wider and taller the opening that links the two spaces, the more they will feel like a single room.

All new openings will need to be spanned by joists, usually steel, to support the walls and floor above. The joist size and its supports should be calculated by a structural engineer (you can find one via the Institute of Structural Engineers at istructe.org). The smaller and less visible these elements, the more seamless the flow between old and new. In most instances it is possible to conceal the joist within the ceiling void, especially if you’re removing only a non-load-bearing partition wall.

The ceiling height between old and new spaces should, ideally, be the same. If they’re different, however, the higher ceiling can often be brought down by adding new battens and plasterboarding over the top.

There is no minimum ceiling height under the Building Regulations, other than above staircases, but 2.3-2.4m is standard. If this is not a practical solution, then it is best to have a smaller opening with a boxed bulkhead to conceal the step-in ceiling levels.

Make sure the flooring is laid at the same elevation

When setting out floor levels for an extension, it is important to work backwards from the finished floor level in the existing property to ensure they will be identical once they’re linked.

When you’re remodelling, rather than extending, any differences in floor level can be overcome by building up – often using a quick-setting silicone floor screed. If the same level can’t be easily achieved, it is best to create a full step, (H)19-22cm, rather than a small difference that could end up being a trip hazard for children.

Use matching finishes in existing and new spaces

Old and new spaces can be linked seamlessly by using the same flooring material throughout. This principle also applies to the same architectural detailing such as windows, doors, skirting, architraves and coving; and the same décor, including colour schemes, flooring, curtains and furniture.

Try to think of your furniture choices for the interior and exterior together. ‘Choosing matching finishes, colours and textures for outdoor and indoor furniture is a great way to keep a coherent look that flows from within the home and out into the garden or patio,’ says John Sims Hilditch, co-founder of Neptune.

How to create an open plan living space

‘Open plan or, more frequently, semi-open plan living, is very popular, as it suits most people’s modern lifestyle and enhances the sense and use of space within the home,’ says Hugo Tugman. ‘I do generally encourage people to go this way; however, there are a number of things to bear in mind when working out how best to use the space.

‘It’s usually a good idea to identify different zones within your layout — such as the kitchen, dining and living areas. The look and feel of your space can be fine-tuned by the extent to which the boundaries of these are defined or blurred, and there are lots of devices, such as continuing through or changing the floor finish, for example, which can control this degree of separation.

‘While walls can block up an open space, they can be helpful when it comes to positioning furniture, storage and radiators, for example. One of the reasons that underfloor heating works so well in an open-plan space is because often there are not enough suitable walls on which to position radiators.’

Use our guide to creating an open plan living space for more tips and inspiration.

Choosing doors and windows for extensions

Doors and windows for your new extension will affect its appearance both inside and out. Getting their positions, sizes and shapes, framing materials and sightlines just right will make the new extension blend with the original house, and can affect how much daylight reaches the room.

It's important to ensure both the windows' and doors' style and framing complements not just your interior fittings – such as your kitchen design – but also the style and framing of your home's existing windows. Something as simple as having the exterior frames in the same paint shade as existing window frames can help the new extension blend with the original house.

Opt for the widest panel possible when you’re choosing bi-fold doors for uninterrupted outlooks to your garden space. ‘The maximum panel width for this door style is 1.2 metres, providing a large expanse of glass and maximising the view outside,’ explains Neil Ginger, chief executive officer at Origin.

‘There are a range of different options available for bi-fold doors in a two storey conversion, from two-door models through to large eight-door configurations, set-ups for bays and 90-degree corner sections,’ continues Neil Ginger. ‘The price of doors varies but, as a guide, a bespoke, aluminium design would cost from £1,500 per door leaf.

‘The space allowance for the doors to open outside depends entirely on their width, which can be as narrow as 40cm, protruding less than half a metre outwards. You will need to allow just over a metre of space for doors with a width of 1.2 metres.'

Read our guide to choosing windows sympathetic to period homes or go contemporary with metal-framed windows.

Choosing bi-fold and sliding doors for an extension

When you're designing an extension, much of the focus of the new room will be on the doors that open out on to the garden.

‘There are a range of different options available for bi-fold doors, from two-door models through to large eight-door configurations, set-ups for bay arrangements and entire 90-degree corner sections,’ explains Neil Ginger, CEO at Origin. ‘The price of bi-fold doors varies but, as a guide, a bespoke, aluminium design would cost from £1,200 per door leaf.

‘The space allowance for the doors to open outside depends entirely on their width. Bi-fold doors can be as narrow as 40cm, protruding less than half a metre outwards, while you will need to allow just over a metre of space for doors with a width of 1.2 metres.

‘Doors that open inwards are ideal for projects where space outside is limited — on a balcony, for example. In the majority of cases, it is recommended that outward-opening doors are chosen to prevent any rainwater from coming into the home when the doors are opened after it’s been raining.’

Bi-fold doors can also be installed internally, as the low threshold of the design can create a seamless transition from one room to another.’

Find out more and get inspiration for your extension with our guide to bi-fold and sliding doors.

Ways to add space without having to extend out

Jump straight to the section that interests you

If you decide an extension is not for you, there are still other ways to add the space you need: