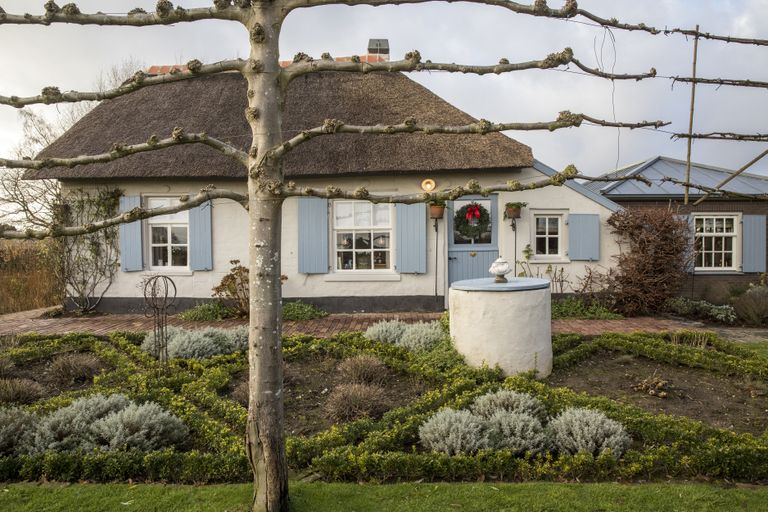 A historic country farmhouse is up there on the dream home list for many people. The rooms tend to be practically designed, they have large kitchens and where period features have been maintained, they are brimming with character.

Now we can't all be lucky enough to own one, but we can all take inspiration from these nine idyllic farmhouses, nestled in the countryside.

Follow the links to see more of these beautiful homes and find ideas to help create a wonderful rural feel in your own home.

1. A Grade II-listed farmhouse in Devon

When the Gavin family drove down the leafy track on the Devon coast and this farmhouse came into view, they instantly knew it was for them. At the time, the children were young, but the family was outgrowing the three-bedroom house in London that they left behind.

The six-bedroom house in the South Hams is set in two acres of land. It is Grade II-listed, with older sections dating back to 1602. Other parts were added in the 18th and 19th centuries. The property was in good condition, but the Gavins still wanted to make their mark on it straightaway.

For Tina and Martin Philpot, restoring this 300-year-old Somerset farmhouse was a labour of love. The house had formally been two separate farm cottages, built in the 1550s, that were knocked together in the 1970s. Now it is an idyllic home with beautiful views, surrounded by a gorgeous garden and set in the beautiful British countryside.

3. A farmhouse saved from dereliction

When Wendy and Peter Blakeman bought this Derbyshire farmhouse back in 2005, it wasn’t a straight transaction. Since the property had been bought by Queen Victoria in 1890, the sale would need to be signed off by the Duchy of Lancaster and the queen herself. On top of that all of the renovation plans had to be run by the Duchy too.

Fortunately, through a passion for the house and a lot of DIY, the Blakemans managed to save the property and turn it into a beautiful farmhouse with a fantastic backstory.

4. A renovated Georgian farmhouse in Yorkshire

When Ann and late husband Peter bought the house in the 1990s it still contained fittings from the ’60s and ’70s and was in need of modernisation, but they had no concerns about taking it on.

‘We lived in it as we renovated it with the help of a builder friend,’ explains Ann. ‘He came to see it before we bought it and said “don’t touch it”, but we bought it anyway! A lot of the original features had been taken out, so we reinstated its character where we could and brought it up to date taking an ad hoc approach – there was no grand plan.’

5. A 16th-century longhouse built in cob

For centuries, cob has been used to build homes throughout the UK, especially in the south-west of England and Wales. One such house is Buckingham Farm — a thatched, 16th-century Devonshire longhouse bought by Suzi and Chris Carman some 20 years ago.

After almost a decade of working on the house at weekends and during holidays, in 2002 Suzi took voluntary redundancy and began to work on the house full time. Being at the house every day made the final push to finish the renovation much easier, and now the pair are happily ensconced in Devon life.

This Grade II-listed, late-Georgian farmhouse was built in 1820, with a small 1950s addition to the rear. It is set in 300 acres of glorious Wiltshire countryside and is now used by the couple for raising cattle. ‘We were very lucky to inherit the house, which had been in Harry’s family for years,’ says Alice.

The main goal for Alice and Harry was to ensure their four-square, traditionally laid-out home could function for their 21st-century family. Yet they also wanted to retain the period property’s original Georgian features and character. Finding that balance proved tricky, particularly given the limitations of listed building consent, which was required even for internal alterations.

7. A Grade II-listed farmhouse from the 17th century

Back in 2011, from the outside the house was beautiful, a great size and surrounded by farmland. ‘Inside, the house in its raw state was hideous. As we wandered into the back garden, however, and paused to take in the spectacular Brede Valley views, I knew that with a lot of effort and imagination, it could, one day, be wonderful.’ says owner, Sally Appleyard.

‘Gaining permission to make alterations to our listed house was far more complicated than we’d imagined,’ says Sally. ‘Essentially, all Rob and I wanted to do was enhance the home we’d fallen in love with. Adhering to the conditions, such as using specific materials, took time and cost much more than we’d thought.’

Love festive Swedish homes? Take inspiration from Harrie and Leny's stunning Dutch farmhouse which is decorated in traditional Scandinavian style. Passionate about vintage Swedish decorating, Leny goes above and beyond at this special time of year, filling the house with scented foraged foliage, antique decorations, and of course plenty of candles for the cosy hygge feel.

After renting in Norfolk for five years while waiting for the right renovation project to come along, Pamela and Jason Crawley finally found this Georgian farmhouse a few miles from Norwich in 2009. Enlisting the help of their son James, who is equally passionate about historic architecture, the family has completely restored what was a dilapidated house into one with period style and splendour.

‘We waited a long time for the ideal house in a peaceful location,’ says Pamela, ‘and when this one came up for auction two years ago, it suited us perfectly. It required a huge amount of restoration, had potential for an extension, and is set in beautiful rolling countryside on the outskirts of a pretty village. The timing was just right, too: our youngest son James had just completed a degree in architectural studies, so he was able to work with us full time for the year we planned to complete the renovation.’

FIND MORE INSPIRATION AND ADVICE FOR YOUR PERIOD PROPERTY: