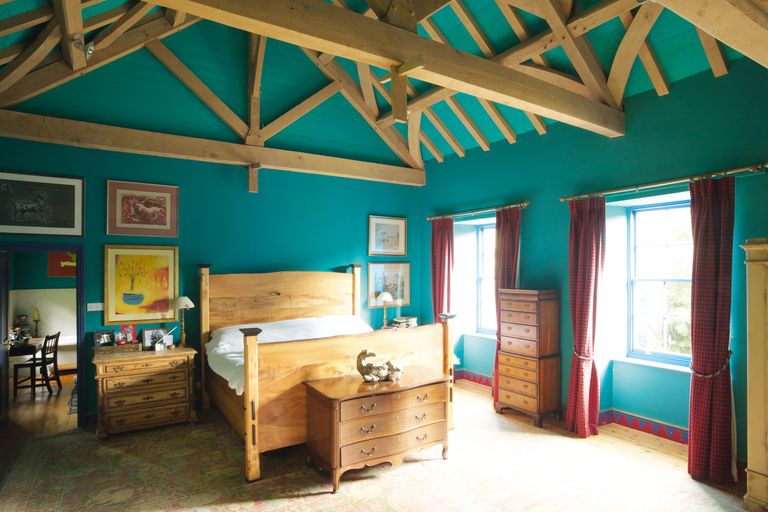 Christie Gavin recalls how when she and her family drove down the steep leafy lane to the farmhouse they were viewing near the south Devon coast, there was an audible ‘wow’ from the back seat. ‘The kids loved it immediately. We got out of the car and they ran round the garden and up and down the stairs.’

That was 17 years ago, when the children were very young.She and husband Peter were also excited by the property, which was a complete change from their small three-bedroom home in Shepherd’s Bush in London. Even so, it was a big step when they decided to buy the house and move to an area where they had no friends or family. ‘Peter loves sailing and for some years we’d been coming here for holidays and weekends, and for perhaps two or three years we’d been looking in a casual way in estate agents’ windows,’ explains Christie. ‘But it was
a mad sudden plunge when we did go ahead.’

Owners Christie Gavin, an ambassador for Landworks,
a scheme to help ex-prisoners back into the community, and husband Peter, an investment manager, live here with their children Luke and Ivo, who are in their early 20s, India, 18, and their two Jack Russell terriers, Tilly and Rusky

Property The six-bedroom house in the South Hams area of Devon is set in two acres of land. It is Grade II listed, with older sections dating back to 1602. Other parts were added in the 18th and 19th centuries Essential repairs The previous owners had left the property in good repair; however, the Gavins decided to do some extra building work

Layout At the end of the house was a two-storey open-fronted barn that was used as undercover parking, with a storage room above. Christie and Peter have turned the open space below into a playroom and created an en suite master bedroom above. They also added a guest bathroom

The reason for the hurry was that their house in London sold far more quickly than they thought it might. They loved where they were living, but as the family grew it was bursting at the seams.

‘We were always keen to move to a big house when we could. I spent my childhood in a sprawling home in a village in Wiltshire and hoped our children could enjoy a similar childhood in the country, too.’

The property was in good condition, but the Gavins still wanted to make their mark on it straightaway. ‘We arrived with boxes and boxes full of books. Peter, in particular, is a great reader and there were no bookcases anywhere in the house, so we’ve added them all over the place,’ says Christie. They enlisted the help of a local carpenter, who initially added a wall of bookshelves in the hall as well as shelves either side  of the fireplace in the dining room.

That was one problem easily remedied. Deciding how to get a playroom and more bathrooms into the property needed more thought and planning. The end of the farmhouse had an open-fronted barn attached, with a large room on top. ‘Apparently, the farmer originally kept his tractors below but had a ballroom above. Some sort of folie de grandeur, I guess.’ Christie and Peter enlisted the help of local architect Roderick James, who drew up plans to make the most of the height of the upper room to design a green oak ceiling structure, which has been left exposed to retain a barn-like feel for their bedroom.

At the far end of the space, an en suite bathroom was created and at the other end, next to the guest bedroom, a guest bathroom was added. With these major alterations in place, Christie could get on with redecorating the house to their taste. ‘When we moved in, most of the walls were cream and white and everywhere had a rose-coloured fitted carpet.

It was certainly very pleasant but we like lots of colour. I remember when we picked the colour for our bedroom – Caribbean Blue. It was a bit of a mad choice, so we weren’t surprised when the painters asked if we were sure! We had just come back from a holiday in Antigua and all the houses are painted this colour there. It was an impulse decision, especially with the slightly different colour blue for the window frames, but one we don’t regret.’

The strongly coloured walls – many based on colours that the couple enjoyed in their former home – also make a good backdrop for the large and varied collection of prints and paintings displayed throughout the house. ‘I’ve been collecting since I was a teenager. And Peter and I have been buying together for a long time, too, as well as inheriting them over the years,’ says Christie.

The furniture also came with them, and has been added to as both Christie and Peter have inherited pieces from their parents. ‘We sometimes joke that the only reason we had our large bedroom built was so we had somewhere to put the beautiful carpet that once belonged to my mother,’ she says.

Despite knowing no one when they bought the house, the Gavins quickly made friends and now they can’t imagine living anywhere else. The sailing that first brought them here remains a constant enjoyment, as does that initial feeling of anticipation as they approach the house down the leafy lane.