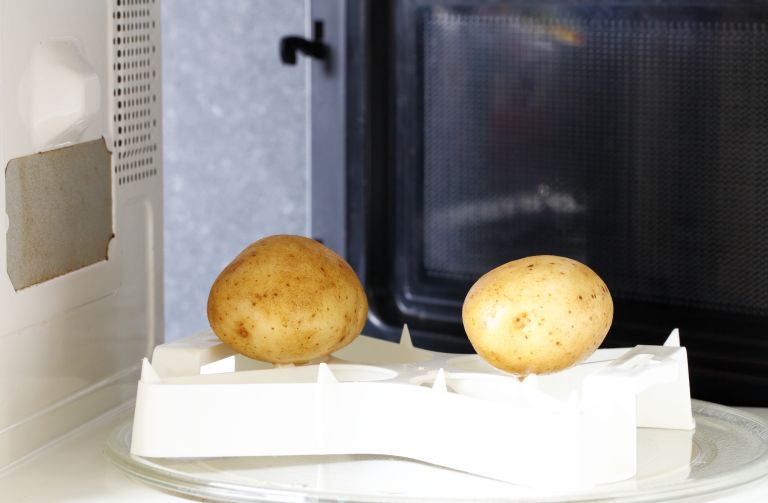 Hey, microwaving a potato isn't our favourite method of making jacket potatoes (they've got to go in the oven for a little while at least – more on that later), but it is a quick way to cook this healthy midweek favourite. So, how long to microwave a potato so that's it's just right for dinner? Find out below.

Find more food advice and recipes on our hub page.

1. How long to microwave a potato

In short, the answer is around five to seven minutes. But you're not going to get the best results knowing that alone. To start with, not all potatoes come out of the ground ready to be microwaved for seven minutes. Think: medium-sized potato, six minutes; small potato: three to five minutes; big potato, eight, nine or 10 minutes.

How to get it right? Start cautious if you're not sure, check it and give it another minute. Repeat until you're happy the potato is ready.

2. What else to know about microwaving a potato?

First, it's important to make sure the potato's clean, so run it under a tap, give it a good rub and pat it dry.

Then poke it with a fork on each side. This won't only stop it exploding in the oven because it helps the steam escape more easily through the skin, it should speed up cooking times, too.

Pop it in a microwave proof dish and set the timer and the power to full. Want to add more flavour? Read on.

3. How to microwave more than one potato at a time

In an ideal world, you should microwave potatoes that are roughly the same size. This will help them to cook evenly. In theory, cooking two potatoes should take twice as long, but be cautious. If you're going to cook your single potato for five minutes, reckon on needing eight minutes for two, then perhaps an extra minute. It all depends on their size...

4. How to improve flavour when microwaving a potato

As we said above, we're not big fans of microwaved potatoes, but you can up their flavour really easily. First, ensure you don't overcook them because they do dry out pretty quickly. Second, once you've poked yours with a fork, rub it over with olive oil, then sprinkle on some salt and pepper. This will help the skin be more flavoursome.

5. Put the microwaved potato in the oven for 10 minutes

Better still? While the microwave is cooking your potato, turn your oven on high. Then simply pop the microwaved potato into the hot oven for five to 10 minutes to crisp up the skin. It'll improve the texture immeasurably.

6. Toppings for a microwaved potato

You name it: sour cream and chives, coleslaw and grated cheese, chili con carne or veggie chili, or just butter, salt and pepper. Or simply have it as your carbohydrate with a salad and protein. Yum.