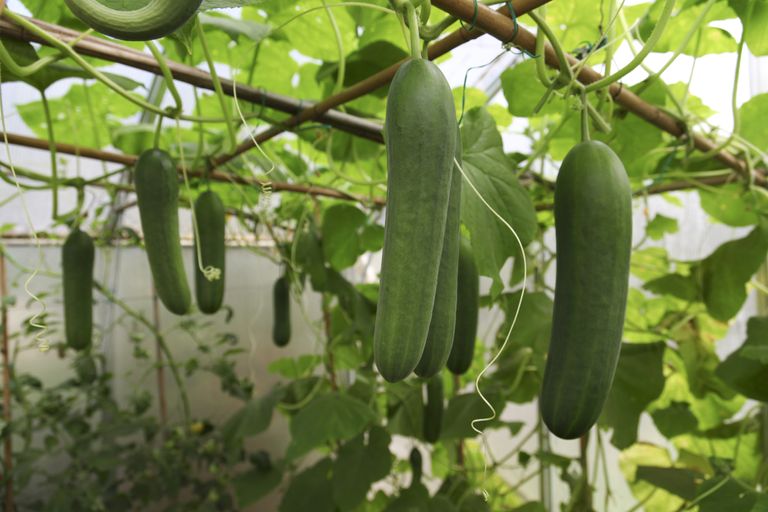 Learn how to grow cucumbers and never buy a cucumber again. We guarantee you that the first time you taste a homegrown cucumber, you won't believe how tasty and full of flavour these vegetables are, especially if you only know the (watery) taste of supermarket bought cucumbers.

Like the vast majority of vegetables, cucumbers need lots of sunshine, warmth, and plenty of water to produce a harvest. It doesn't really matter so much whether you grow them in open ground or in containers in a greenhouse or conservatory, but it needs to be sunny preferably south-facing.

Get plenty more garden know-how at our hub page.

How to grow cucumbers

1. Sow the seeds into a seedling tray, two seeds per compartment. Water well and place in a sunny spot indoors.

2. When seedlings are about two centimetres tall, remove the weaker one. Transplant into small growing pots (or make or your own by making holes in yoghurt pots).

3. After about four to six weeks, your cucumber plants will have leaves. At this point, you can either leave them to grow indoors, or transplant them into your garden – do this only when the weather is warm, including at night, so realistically, from late May onwards. If planting outside, harden them off first, putting them outside for a few hours at a time at first.

4. Cucumber need about six inches of depth for the roots, so take that into account if growing in containers. Garden cucumbers can be left to to develop a trailing habit, like marrows. Indoor ones will need cane supports or a trellis.

5. If growing indoors, you will need to remove male flowers regularly, or your cucumbers will taste bitter and go to seed. Male flowers have short stems, unlike the bulbous stems of female ones. You can also choose a female-only variety if growing indoors.

6. Once small cucumbers begin to form, feed the plants twice weekly with a vegetable fertiliser. Make sure it has at least twice the amount of potassium as nitrogen – a nitrogen-rich fertiliser will just give you a  luscious green plant with no vegetables.