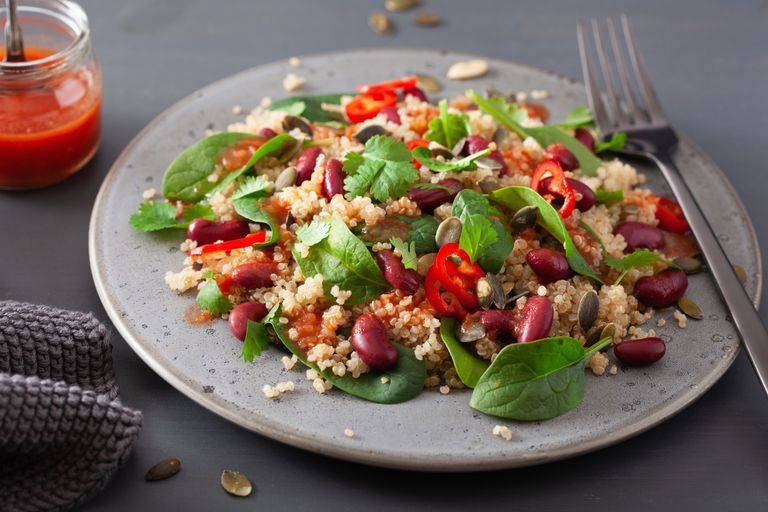 If you're considering going vegan in 2020, you're in good company. There’s growing interest in going vegan: the number of people following a vegan diet in Great Britain quadrupled between 2014 and 2019, according to Ipsos Mori surveys commissioned by The Vegan Society, and The Food & You surveys by the Food Standards Agency and the National Centre for Social Science Research. Nearly half of UK vegans (42%) had made the change in the past 12 months, a 2018 study by GlobalData revealed.

But whether your motivation is animal welfare, environmental, health driven, dietary, or a combination of these and other factors, what do you need to know to become vegan, and what’s the easiest way to go about it? We have the answers.

Find recipes and more foodie know how in our dedicated hub.

What is a vegan diet?

A vegan diet is plant based. So, that’s yes to eating beans, pulses, nuts, grains, seeds, vegetables and fruit. Out are meat, fish, shellfish, insects (no, us neither, but they have been proposed as a way to satisfy the needs of a growing world population).

Other foodstuffs on the list to avoid for vegans are dairy products like milk and cheese, eggs, and also honey.

Should I go vegan straightaway?

You can swap to a vegan diet between one day and another if you get your kitchen organised. However, it can be easier to make the change more gradually, giving you time to try out ingredients and recipes and find new favourites.

What can I use in place of animal products?

Many of the foods we eat every day aren’t plant based, and unless you are going to radically alter your diet so you don’t add anything to tea, put a spread on your bread and so on, you’ll need to plan in swaps for these.

There are vegan alternatives for milk, butter, and cheese with plant ‘milks’, non-dairy spreads and vegan cheese now widely available. It may take a bit of experimentation to find out which soya or nut milks are your preference. Likewise, finding cheese substitutes that please your palate, and work for sandwiches, as a garnish, and for cooking could involve some trial and error.

Eggs might seem challenging to replace. For recipes, aquafaba – the water in which legumes like chickpeas have been cooked – can replace egg whites so you can whip up a meringue or mousse. For baking, some supermarkets plus Amazon offer Orgran No Egg or Free & Easy Egg Replacer. Meanwhile, if the idea of giving up scrambled eggs and omelettes is getting you down, you can check out Follow Your Heart VeganEgg from Amazon and other stores. It can be used in baking, too.

If you still like the idea of the flavour and texture of meat, there are plenty of substitutes in high street supermarkets that seek to taste like the real thing. Want an authentic appearance? The Beyond Burger at Tesco even ‘bleeds’ – although it’s actually beetroot juice that creates the effect.

What about protein, and calcium?

One of the biggest concerns for many people contemplating going vegan is whether their new diet will contain enough protein. Sources of plant-based protein include beans, chickpeas, lentils, quinoa, tofu, and nuts and seeds. A serving of protein in most meals is suggested.

A non-dairy diet doesn’t include calcium from this source, although you can still obtain it from dark, leafy greens, of course. Look out, though, for calcium-fortified vegan products such as soya milk, orange juice, and tofu to meet daily requirements.

You can find detailed nutritional advice from dieticians plus books via The Vegan Society.

Is shopping at the supermarket easy for vegans

Being vegan used to mean scrutinising food labels for animal-based ingredients even when a product appeared to be free of them, but times have changed. Prompted by the growth of interest in veganism as well as the demand for plant-based meals from non-vegans who want to reduce meat consumption, the supermarkets have launched plentiful plant-based ranges including both individual products like vegan pies, sausages, burgers, mince and so on, as well as ready meals.

The ranges offer an amazing choice and make life easy when you’re busy, but do be aware that prepared vegan food could still result in the consumption of more salt, sugar and fat than is healthy. The lesson? You do need to check the labels to be health aware.

Where can I find vegan recipes?

If you want to cook from scratch some or all of the time, there are plenty of great resources online – including our recipe pages. These are our favourites:

There are over 50 pages of vegan recipe books from the UK alone on Amazon.

If you don’t already have a slow cooker, think about investing in one of these as an easy way to produce tasty vegan meals.

Whether you are trying to cut down on meat, or are a vegan looking for fresh dinner ideas, here you will find over 30 recipes to try in Being Vegan from Future Plc.View Deal

Is being vegan just about food?

Although diet is a major part of veganism, embracing it fully also means avoiding materials derived from animals – leather, for example – products tested on animals, and also places that use animals for entertainment, think horse racing, or zoos, for example.