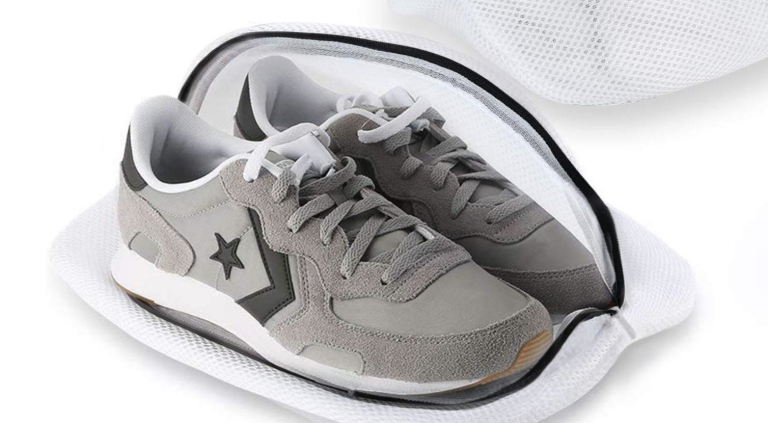 It's about this time of year when you start thinking about washing your trainers in a washing machine. After a summer of dry(ish) weather, during which your kicks stayed as clean as when you sprung them from the box, autumn brings with it the nemesis of trainers: mud.

So, what to do? If you're determined to put them in the washing machine, we'd recommend first checking whether the trainers' manufacturers recommend it (Nike and Adidas don't). If you get the thumbs up, the biggest mistake you can make is to just sling them in. First, you need to prepare them – and the washing machine.

Start by removing the laces, then any dirt, stones or anything stuck to the soles with a soft brush and then a damp cloth. Why do this? A stray pebble can wreck a washing machine, and the cleaner the trainers are when they go in, the cleaner they'll be when they come out.

If you don't have a shoe bag, you can leave the trainer laces in the trainers and trap them in the door as you shut it. This, too, will stop the trainers from bashing against the drum when it spins.

Want to play it safe? After you've removed surface dirt, mix washing detergent in warm water then use a toothbrush to gently brush it into the trainers, starting on the insides, before moving to the soles. Refresh the water and detergent mix and tackle the upper parts of the shoes. Wipe off the excess with an e-cloth.

As for drying trainers, this, too, is important: don't put them in a tumble dryer. Unless, of course, you like your trainers two sizes smaller and mis-shapen. Instead, leave them to air-dry in a warm, dry and – if outside – shady spot (we'd only put them in direct sunlight if they're all-white. If you want to speed up the drying process, a dehumidifier will help; otherwise, stuff the trainers with kitchen roll (and change it for fresh paper every couple of hours).

Trainers still smelly after all that? Sprinkle baking soda inside them and leave them over night. The next day, shake them out and you should be good to go.