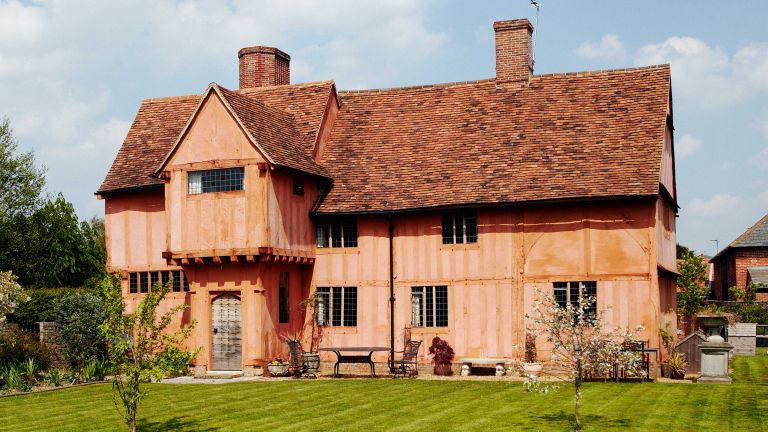 Do you proudly reside in a medieval or Tudor home? Then you will know that as much as it is a pleasure, it is a great responsibility. So, knowing how to keep your little slice of history in top condition for years to come is essential.

For many of us, the thought of medieval and Tudor architecture evokes ideas of monumental castles, cathedrals and palaces. But the housing of the period can be equally evocative – charming black and white cottages, steeped in history with quintessential gardens to match.

Use this guide to find out how to renovate your home.

Sadly, there are very few houses that remain from this period. Of England’s listed homes less than one per cent are recorded as being in part or fully medieval. If your home is listed, make sure you know the rules. Yet, throughout our towns and villages, even where they appear to have been lost to time, or hidden by remodelling, signs remain – you just need to know where to look.

When you find evidence, the air of mystery will be clear to see. Especially with timber-frame properties, where medieval and Tudor carpenters had structural freedom – allowing them to create facades that could appear gravity defying and crafting an air of unfathomable skill.

If you're not sure of the age of your house, read this guide to working out which era your home dates from.

The houses of medieval and Tudor Britain were largely built with practicality in mind – the exteriors offering a clear reflection of the size and uses of spaces within, and little concern given to symmetry.

The most prevalent housing form during the later medieval period was the open hall. This was a singular space – open to the rafters – in which living, eating, and even sleeping took place.

In the centre lay an open fire providing heat and, especially in the houses of lower society, a place for cooking. There was no chimney, the smoke would merely rise to the roof space and escape through forms of vents known as louvres.

This was a basic set-up, with one end – the high end – home to the owner’s table, and at the other end – the low end – the main door would be located. This had an opposite door that led out of the rear of the hall onto outbuildings. In larger, more prosperous households, one of these outbuildings would have been a kitchen – placed away from the home as a precaution against fire. Discover how to design a kitchen that will suit a period home.

It is easy to imagine an open hall filled with smoke and cold draughts, so unsurprisingly one of the first developments included the addition of a screen at the low end. This created a passage between the two doors, known as the ‘through’ or ‘cross passage’, which reduced draughts.

This was swiftly followed by the addition of service rooms, usually consisting of the pantry, for storing bread, and buttery, not for butter but for butts of wine and ale.

With the service rooms, private chambers began to be added along with the advent of two-storey wings known as cross wings. And as with many things, the wealthier and more important you were, the more you had – with cross wings at both ends reflecting a higher status.

Over time, the trend moved towards smaller halls, with emphasis placed on the private wings, except in the largest homes where the hall would maintain an air of prestige. This marked the beginning of the end for the open hall, with the insertion of floors by the 15th century confining the hall to the ground floor, where it remains in homes today. Make the most of your hallway with these 20 traditional ideas.

The spatial restrictions of medieval towns, brought about by the typically narrow plots, led to differing developments with two predominant forms being used. One remained a version of the rural hall house, with the hall set parallel to the street and the familiar high and low ends. The other placed the hall at a right angle to the street, with the street end often incorporating a shop or business.

The increasing subdivision of plots resulted in narrowed buildings extending further to the rear, requiring passageways for access – many of these remain. Even where plots have been redeveloped and properties refaced, passageways can provide a clear window to the medieval origins around us.

If you are trying to identify a Tudor or medieval home, or want to understand the authentic design elements for renovating a property of this era, then look out for these key features.

Despite the evocative image of timber frames, stone, cobbles, brick and flint were used across England. But the costs associated with quarrying, transporting and working stone meant it was generally the preserve of the most privileged.

In other areas, earth walling techniques were developed, such as cob in the South-West. But for the most part medieval and Tudor houses were of timber-frame construction, with limited use of masonry for critical areas such as plinth walls, which protected vulnerable timbers by lifting them off the ground.

Over the period, carpenters across the country enjoyed evolving various forms of timber framing, from the cruck to box framing. Cruck frames are particularly distinctive, using curved timbers (blades) to support both the walls and roof timbers, and often seen as being somewhat reminiscent of parted legs – hence the name’s derivation being similar to that of crotch, meaning fork.

Of all the methods used, one of the clearest indicators of medieval framing is the use of close-studding, with its somewhat excessive use of timber offering a very public display of wealth.

Between the timbers the gaps were filled with varying forms of woven laths and withies, with mixtures of mud, animal dung and hair daubed on. Over time, lime plaster was also introduced and occasionally other infills such as brick nogging.

Brick construction was gradually introduced from the 15th century onwards, but it wasn’t until later periods that it would usurp timber framing. And while it grew in popularity under the Tudors, it continued to exist principally in the housing of the elite.

These bricks were much thinner and longer than those that would come later, with English bond (where a row of brick ‘stretchers’ were alternated with a row of ‘headers’) the favoured technique through to the 17th century.

The use of brick also brought about some more decorative flair with things like cross patterns, known as diapering. Look out for brickwork problems with a simple maintenance check.

Incorporated on many medieval properties, jetties were a seemingly gravity-defying device that became widespread from the 15th century onwards. They used the timbers of the upper floors to create space by projecting beyond the building line below, and were regularly employed in the construction of buildings as tall as four storeys high. Although their use was often as much about exuberance as it was about space.

Most windows of the period were originally devoid of glazing, instead relying on vertical mullions with either oiled cloth or timber shutters to keep out the worst of the weather. Where glazing was afforded, such was the skill and costs involved that it was only made up of small leaded panes. Many considered the expense so great that at points it was common practice to take them when moving house!

If you have original leaded windows, it's essential to repair and maintain them correctly – use our guide to find out how.

The placing of windows is often a useful guide to the function and status of the internal spaces – the larger the window the more important the space. The most common window types were:

Timber mullions – The most typical. Even where the window may have long since been remodelled or blocked, evidence can still be seen in houses today. Peg holes, and shutter devices such as runners all give clues.

Oriel – These project from an upper storey and were a common form in higher status housing. Often above gateways or entrances for all to see.

Bay – A bay window could stretch from the ground up to the ceiling and they were generally found at the high end of the hall to provide extra light in this more important area and to allow the owner to see all those visiting the house.

A variety of different door shapes were popular, principally being the two-centred, three-centred (used from the late 13th century) and four-centred/Tudor (late 14th century through to the 16th century) arches.

The main door would usually be the most elaborate with the high end treated similarly. Generally the more basic the door and door arch above, the lower the status of the room and its use.

If you have an original door, here's how to restore it correctly.

With the expanded layouts and insertions of floors above the hall, the issue arose of how to expel the smoke from the open fire. Before fireplaces, various solutions were concocted including the smoke hood.

The fireplaces that were developed during the period tended to begin in the private spaces, typically by adding on large external chimneys at the ends, and it was only in the 16th century that they began to be used en masse.

Find out how to reopen a hidden fireplace.

External timbers were not generally the black and white we know today; a range of colourful facades lined our streets due to the lime washes applied to preserve the timber and give extra weatherproofing. Besides this, the exteriors were rarely embellished beyond carving and playful use of structure.

The interiors were, however, treated differently, considered just as important then as we consider ours today. Interior timbers could be highly decorated with carving and painting – the simplest, and most widespread, form consisting of chamfers and stops.

Although the survival of wall paintings is extremely rare, these were highly fashionable up until the middle of the 16th century.

Tudor and medieval design details to look for