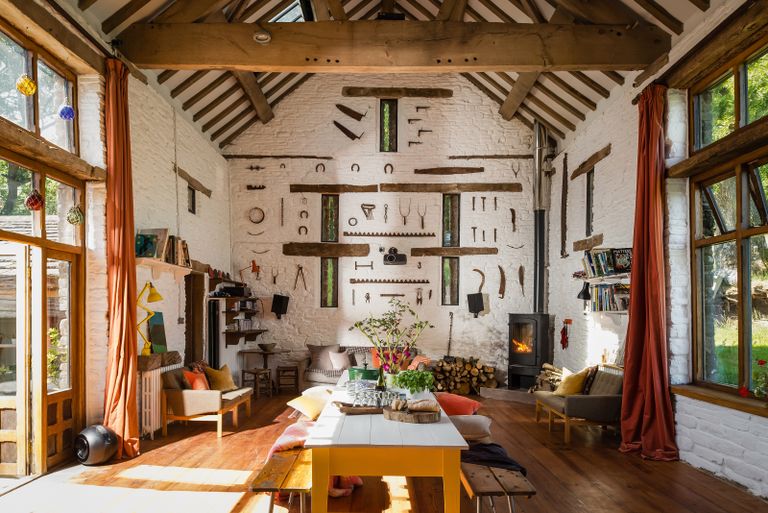 Ask anyone who has converted their home and they’ll tell you it’s a big undertaking. However, for an increasing number of people it's a lifelong dream, a way to create a truly unique space to call home.

If you've undertaken your own barn conversion, are considering it or simply just love browsing beautiful old homes, then inspiration and enjoyment from this selection of stunning projects. Then take a look at our expert guide to how to convert a barn.

The  Grade II-listed building dates from the 1850s, and was converted in the late 1990s into a characterful home. ‘We knew the area and had always liked the peaceful location,’ says Kate. The house was empty when the couple viewed the property, which gave them ample time to decide that they could make it their home. The kitchen and bathrooms were fitted with good quality cabinets and sanitaryware, but the style was rather dated.

The barn now has a pleasing spacious quality, enhanced by Kate’s blend of furniture, art and accessories. ‘We are fortunate to have several really good places for vintage furniture and homeware nearby. I have bought many items from The Old Pill Factory in Witney and from Station Mill,’ she adds. ‘I like to combine different styles, as I think it creates a more interesting interior.’

2. A 17th-century flint-and-brick granary barn is given a new lease of life

Enjoying the panoramic seascapes across the unspoilt saltmarshes of north Norfolk from the windows of her 17th century granary barn, Caroline Comber says she used to daydream about owning a home in Blakeney village, near to where she grew up.

That dream became a reality 20 years ago, when she bought Quay Barn, an original flint-and-brick harbourside buildings on Blakeney quay. Her project began in 1997 when her daughter Isabelle was just two weeks old. ‘My parents picked up the keys and they set to work right away taking out the old-fashioned sinks and built-in cupboards from every bedroom and giving the walls a fresh coat of paint,’ says Caroline.
Today, the barn is a world away from the one that Caroline moved into all those years ago. Have a look at the finished project here.

3. Be inspired by this 15th century barn conversion

Henry John has fond memories of childhood holidays spent at his father’s rural home, which he helped to restore and extend. In a Herefordshire valley accessed by a mountain road, the farm cottage, barn and outbuildings date back to the 15th century, and various phases of redesign and renovation have taken place over the years.

The modest cottage stood on a working farm and was surrounded by other derelict buildings including a hay barn where Henry and his brother used to play. In 1989 their father bought these buildings from the farmer and set about joining them to the cottage with a new annexe, built using reclaimed materials to create a bigger home.

After his father died, Henry took over the project, reworking the internal layout so that the barn became a cosy a living/dining space, filled with agricultural charm. Take a tour here.

4. A cow byre is transformed into a colourful family home

‘We bought the property 25 years ago when the cows had just left. It was an open u-shaped building with a corrugated iron roof and a Dutch barn for animal feed,’ explains artist and homeowner Vanessa Arbuthnott. It took six months to make just a section of the property habitable enough to move in. Today it is filled with scorching shades of tangerine and hot pink, rich mossy greens, celestial blues and moody charcoals and brimming with character.

Be inspired by the whole renovation story here

5. A modern update transforms this converted barn into a rural dream

Sophie and Bob Waiting often passed this large dwelling nestled in the Lancashire countryside on their dog walks, and after some enquiries, they discovered the house was up for sale.

‘I dismissed the project initially as I feared it would be too much work for us to take on ourselves, but the setting and views won us over,’ reveals Sophie. ‘The barn came across as a sad old building that wanted to feel happy again. When the sale went through smoothly, it felt like it was meant to be.’

‘We ripped out all the fixtures and fittings and I filled our piggery with salvaged finds,’ reveals Sophie. ‘I wanted to reuse as much as I could, so I clung onto anything that may have a future use.' Using clever design ideas and smart planning, the couple have highlighted the barn’s unique features. ‘This place had a lovely feeling to it and we wanted to keep that sense of personality,’ says Sophie. ‘This barn was a once in a lifetime opportunity; we’ll never move again.’

Lisa and Richard Swaine are enjoying making the most of their newly completed home – a spacious barn conversion that incorporates the adjoining renovated farmhouse. It's been a long time coming, with work starting on the derelict former dairy farm in 1998.

With only a small amount allocated to spend on the farmhouse and a tight budget for the barn conversion, they knew that they would need to carry out most of the work themselves. ‘We didn’t have too many problems with the farmhouse,’ says Lisa. ‘My father is a cabinetmaker and my brother a steel fabricator, so the only trades we needed were plumbing and electrics. Richard and I did the concreting, pointing, tiling and plaster-boarding.

Be inspired by this DIY conversion on a budget and see how it really comes into its own during the festive period, here.

The Griffin family fell under the spell of the Cumbrian landscape many years ago, and when their dream house went on the market they snapped it up and started renovating.

‘An architect there gave us the idea for a gallery in the barn living room leading to one of the bedrooms, and Douglas Kent from the Society for the Protection of Ancient Buildings (SPAB) guided us  in terms of methods and materials,’ says Andrew.

Work began as soon as planning permission was granted and the first job was to restore the barn. Planning restraints meant that the couple had to keep the main elevation of the barn as it was, with no new doorways or windows. The new windows at the back and side of the barn were matched to the original door openings with riven stone slab lintels, hardwood frame and small panes.

Take a tour of the finished project here