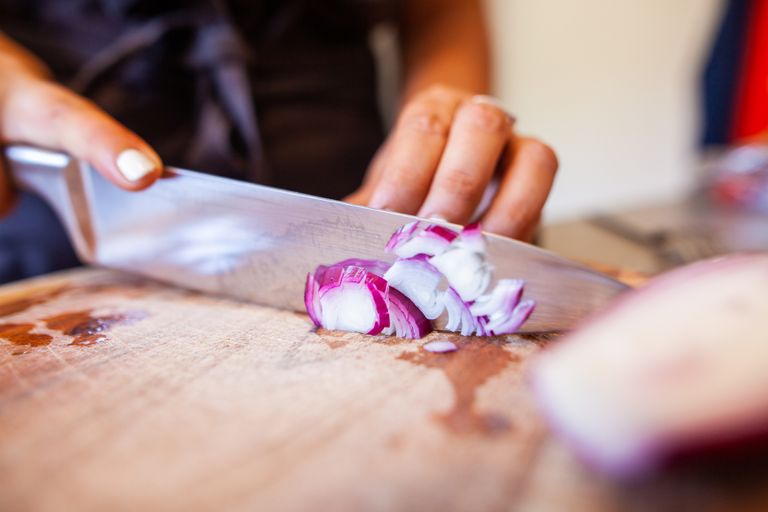 Believe it or not, there's a right way to chop an onion. Yep, we've checked and now we're doing it like pros it's sooo much easier. So, whether you want to speed up the prep (and who doesn't with this tear-inducing ingredient), learn to cook like a chef or simply like to get things right in the kitchen, here's the proper way to chop an onion.

How to chop an onion into slices

1. Cut the onion in half along its length, from stem to root. The easiest way to do this is to stand it on the root end, then cut downwards from the top.

2. Now cut off the stem end of the onion – but not the root yet (why will soon become apparent!).

3. Remove the onion's skin pulling from the cut end towards the root.

4. Now cut the onion into thin slices, lying the flat half of the onion on to the chopping board. Use the root end to hold it steady (if you've been removing the root until now, you'll know a slippery, skinless onion is hard to hold still and tends to collapse as you cut). Discard the root end when you reach it.

5. Which way to cut the onion? It depends on the shape of the slices you're going for: you can either cut across the onion to create semi-circular shaped slices or down the length of it to create flatter slices.

6. How thin to slice the onion? Again, it depends on the recipe, but somewhere around half a centimetre thick will do for most meals.

7. That's one half done, now move on to the other.

How to dice an onion

Start by following steps one to three above. Then...

1. Cut the onion into slices along its length. It will still be attached to the root so will maintain its shape.

2. Pressing down gently on the dome (and minding your fingers), slice the onion in half widthways so that the top of the dome is separate from the base. Again, leave the root intact and the onion will hold its shape.

3. Now, starting at the stem end of the cut onion, slice across the width of the dome, creating little diced squares until you reach the root, which you can discard. Job done.

What's the secret to chopping an onion like a pro?

A sharp knife and a decent chopping board. If, like many of us in the Realhomes.com office, you've been working with blunt knives and wondering why it slips (usually on to your finger), be converted to a sharp knife (or two). These are our favourites knife sharpeners.