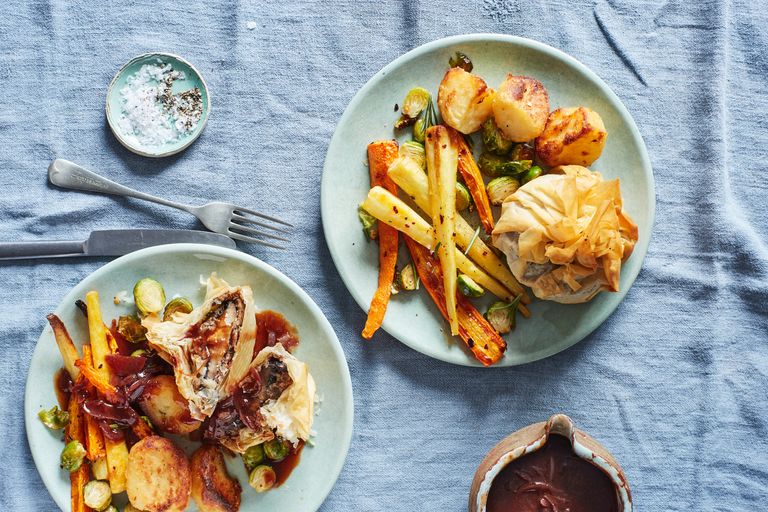 This vegan roast dinner recipe is the antidote to those lonely Sundays that the vegans can't seem to escape. The Sunday roast is a staple, so it's only natural that the aroma of gravy and the sight of plates piled high with chicken, potatoes and Yorkshire puds can trigger a childhood throwback and a little tinge of envy in those of us who have chosen a plant-based diet. If only there were a vegan alternative that tasted as good... BOSH! are here to save the day with one of our favourite vegan recipes.

When we say all the trimmings and more... we mean it. Culinary gods, Firth and Theasby (aka BOSH!), have come up with a mouth-wateringly delicious vegan roast with a light filo-pastry, a super rich gravy and garlic roasted veggies, of course. Keep scrolling so we can take you step by step through the recipe, explaining how to create each part and how to achieve the best vegan roast dinner, ever.

BOSH! Healthy Vegan by Henry Firth and Ian Theasby is out now (HQ, HarperCollins) | Buy now on Amazon |Was £16.99, now £9.93
Find this recipe and loads more amazing – and healthy – vegan recipes in the full recipes book. From tasty breakfasts, to low sugar desserts, everything is easy to prepare and fully plant-based.

What you will need:

How to make the roast veggies:

1. Peel and quarter the potatoes

2. Peel the carrots and parsnips and cut them into small, similar-sized batons

3. Trim and halve the Brussels sprouts

4. Place the potatoes and a pinch of salt in the large saucepan, cover with cold water, put the pan over a high heat, bring to the boil and simmer for 6-7 minutes until slightly tender

5. Drain the potatoes, return them to the pan and let them steam-dry for 2-3 minutes, shaking the pan gently to fluff the edges

6. Put the olive oil and a pinch each of salt and pepper in a large bowl

7. Add the potatoes, carrots and parsnips and toss to coat

8. Take the potatoes out of the bowl, place them on one of the baking trays and put the tray to one side

9. Add the Brussels sprouts to the bowl with the carrots and parsnips and toss to coat

10. Put the tray of potatoes in the oven and roast for 40 minutes

11. Then, take the roasting tray out of the oven, turn the potatoes and put the carrot and parsnips on the tray. Put the tray back in the oven for 20 minutes.

12. Take the tray of potatoes, parsnips and carrots out of the oven and add the Brussels sprouts to the tray

(13.  Meanwhile, you will put the Wellington filo parcels on a separate tray and put the trays back in the oven for 20 minutes until all the vegetables are well roasted and the parcels are golden and crispy)

How to make the rich gravy:

2. Peel and grate the garlic

3. Heat the olive oil in the medium saucepan over a medium heat

4. Add the onion and a small pinch of salt and cook, stirring, for 5-6 minutes

5. Add the garlic and stir for 1 minute

6. Combine the cornflour with the water in a cup and stir to make a slurry

7. Add the slurry to the pan along with the tomato puree, yeast extract and maple syrup and stir to combine

9. Add the vegetable stock, stir, increase the heat and simmer for 10-15 minutes to thicken, stirring occasionally to prevent the gravy catching on the bottom of the pan

10. Taste, season to perfection with salt and pepper, and set the pan to one side (If you prefer a smooth gravy, pass it through a sieve)

How to make the Wellington filo pastry:

While the gravy is thickening, prep the mushrooms...

1. Peel and grate the largest of the 3 garlic cloves into a bowl

2. Add a pinch each of salt and pepper and a drizzle of olive oil and stir

3. Place the 4 large mushrooms on the second baking tray facing up

4. Rub the garlic paste into the gills of the mushrooms

6. Remove the tray from the oven and set the mushrooms to one side

While the mushrooms are cooking, prep the first part of your Wellington filling...

9.  Warm the remaining teaspoon of olive oil in the frying pan over a medium heat

10. If the onion and mushroom mixture has released liquid, drain it briefly in a sieve

11. Add the mixture to the pan with a pinch of salt and cook, stirring, for put to one side

12. Remove the leaves from the rosemary and thyme and finely chop

13. Put the chestnuts, pecans and wholemeal bread in the food processor and blitz to form a textured filling

14. Warm the remaining teaspoon of olive oil in the frying pan over a medium heat

15.  If the onion and mushroom mixture has released liquid, drain it briefly in a sieve

16. Add the mixture to the pan with a pinch of salt and cook, stirring, for 4-5 minutes

17.  Add the finely chopped rosemary and thyme and stir for 1minute

20. Add the chestnut, pecan and bread mixture and fold it into the rest of the ingredients to form a thick ball of filling

21. Taste and season to perfection with salt and pepper

22. Cut the filo pastry sheets in half so you have 8 squares

23. Lay the sheets out in piles of two, arranged so the two sheets are overlapping at different angles to create star shapes

24. Divide the filling into 8 equal pieces, roll one of the pieces into a ball, place one ball in the centre of a pastry star and press it to form a 1cm-thick disc

25. Take one of the roasted mushrooms and place it in the centre of the disc

26. Take another piece of the filling, roll it into a ball and flatten it out into a 1cm-thick disc between your hands

28. Pull the exposed sheets of filo pastry up around the ball and twist the tops together so the Wellington pastry parcel is tightly wrapped, being careful not to rip the pastry

29. Spray the tops of the pastry parcels with a little cooking spray

30. Repeat this process with the remaining ingredients to make four Wellington parcels

Prepare to serve your dinner...

Warm the gravy through so it's hot and gently steaming. Remove the trays from the oven, plate up the Wellington parcels and roasted vegetables, pour over the gravy and serve immediately. Aaaaaah, lovely.