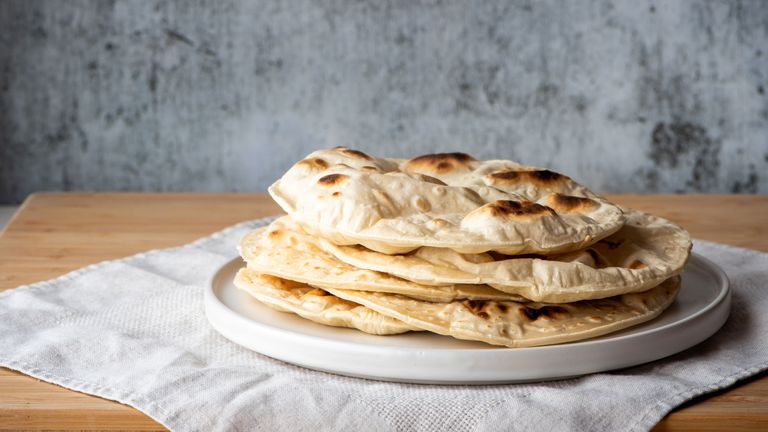 Always wondered how to make naan bread? A great accompaniment to curry and perfect for soaking up delicious sauces, naan bread can be enjoyed plain, or topped with plenty of herbs and spices, as well as toppings and dips: from lamb and smoked salmon, to traditional pizza toppings.

And if you can't find naan bread in your local supermarket, or don't want to order take away, it's super to easy to make from home and should take you less than fifteen minutes. With all the time we have on our hands, right now, there's never been a better time to give it a go.

Find the recipe below. For a instructions on how to make bread (the trad kind), don't miss our guide. Then, head over to our food hub for more inspiration.

1. Combine your yeast with the, sugar and lukewarm water in a small bowl and set aside. You should begin to see it bubble.

2. Place your butter – or ghee – in a saucepan over a medium heat and begin to gently melt.

3. In another bowl, combine your flour and salt thoroughly before creating a small well at the centre. Gradually pour your melted butter, or ghee, into the well, followed by your yeast mixture and gently fold in the flour.

4. Once you've achieved a dough-like consistency, remove it from the bowl and place on a lightly floured surface. Knead for around five minutes, then set aside under a clean tea towel for an hour, or until it's doubled in size.

5. Once your dough has had time to prove, split it into five or six small balls – these will form your naan breads.

6. Roll each ball of dough into a naan bread shape – they can either be round, or more oval shaped.

7. Place a large frying pan on the hob and heat with plenty of butte,  as well as a little garlic and coriander if this is your preference. Take one naan bread at a time and place in the pan, cooking for six to eight minutes,  or until cooked through and golden on each side.

We saw that Chrissy Teigen (US model, great cook, John Legend's wife (lucky)) had recently posted on her website that her favourite bread to bake was naan, so we tracked down her recipe and it's been a revelation.

It's also pretty easy to make (one key: a piping-hot pan). So, check out Chrissy Teigen's naan recipe below, and say hello to your new favourite carb.

1. Begin by combining yeast, sugar and water in a small bowl and set aside for 10 minutes. During this time it should become foamy according to Chrissy Teigen. Once this time has passed, add in yoghurt and olive oil and whisk thoroughly.

2. In a separate bowl, combine flour, baking soda, baking powder and salt. Combine with the yeast-yoghurt mixture and knead until you achieve a large, sticky bowl of dough. Set aside for two hours, or until your mixture has doubled in size.

3. Once you've given the dough plenty of time to rise, divide it into four equal pieces and roll into large ovals that resemble the traditional naan bread. Sprinkle with flour and get ready to get cooking.

4. Heat a large, cast iron skillet (you'll see some of our favourite below) and lay each of your naan bread in for about three minutes, or until bubbles begin to appear – this should take around one minute per side. Keep each naan bread under a clean towel to ensure they stay warm while you prepare the others.

Cravings: Recipes for All the Food You Want to Eat by Chrissy Teigen and Adeena Sussman | $17.99 at Target

All the food you want to eat isn't an exaggeration. From cocktails, to cacio e pepe, this book's got it all. View Deal

Cravings: Hungry for More by Chrissy Teigen | $19.21 at Target