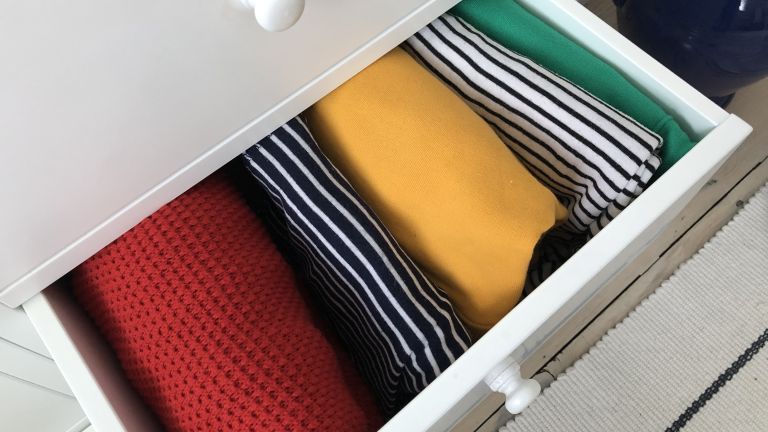 Marie Kondo folding techniques have ignited a nationwide (possibly global) infatuation with decluttering drawers, with one of her most notable approaches to tidying being how to fold clothes. Instead of folding clothes, towels or sheets – but let's say T-shirts – and stacking them in drawers one on top of another, which inevitably leads to a) items at the bottom being ignored and forgotten and b) a tangle of clothes created when you do finally rummage towards the bottom of the drawer, she advocates folding them so that they can stand vertically on their own and then be placed into drawers as above. The result? You can instantly see everything you own and – amazingly – this method takes up less space.

Want to fold clothes like Marie Kondo? Follow our simple step by step to find out how. Find out about Marie Kondo tidying up in our guide, too. For more cleaning and tidying tips, hacks and advice, see our hub page.

Casting call – I will be bringing the life-changing magic of tidying up to a brand new series for a global TV platform! On this new series, I will be working with people to transform their home & spark a personal transformation. . If you are in the LA area and interested in transforming your home and life with me, apply through the link in bio! Tag a friend who would love this and let them know. To receive the latest updates, subscribe to our official newsletter at konmari.com. Marie Kondo

1. Lay the T-shirt on a flat surface so that it's sideways on to you. Smooth it out – and if you're doing it like Marie Kondo, follow her instructions and 'send love through your palms' as you do so (bear with us).

3. Now take the far side of the T-shirt and fold it right back over the third you folded in step 2, so that you cover it completely (see above). Neatly fold the sleeve back over and smooth.

4. Next fold the T-shirt almost in half, leaving the bottom end of the T-shirt showing (as above).

5. Now fold it into thirds to make a neat rectangular shape (as above). It should be able to stand up on its own (see below).

If it doesn’t fall over when you remove your hand, it has passed the folding test! Thank you for sharing your #mykonmari moment, @albaeilriordino. Marie Kondo

You can fold a hoodie just a you would a T-shirt.

1. Lay the hoodie on a flat surface so that it's sideways on to you. Smooth it out.

2. Fold one third of the hoodie along its length towards the middle. The fold will be about level with the neckline of the hoodie. Smooth it down, then fold the long sleeve of the hoodie back towards you, then back down the length of the body (again, think how they do it in posh clothes' shops).

3. Now take the far side of the hoodie and fold it right back over the third you folded in step 2, so that you cover it completely. Neatly fold the sleeve back over and smooth.

4. Next fold the hood down over the body of the hoodie.

5. Now fold it into thirds to make a neat rectangular shape. It should be able to stand up on its own.

Folding with the KonMari Method transforms your drawer. It might seem time consuming at first, but once you organize everything this way, you’ll find that you actually save time. No more looking around for lost t-shirts and resorting your drawer every morning! ⠀ ⠀ Beautiful photo from certified KonMari Consultant @worthwhile.me. Photo by @adahmed2018. Marie Kondo

1. Lay the trousers, zip down, on a flat surface and fold them in half, lengthways.

2. Now take the bottom of the trouser legs and fold them towards the top so that the hems are level with the top of the back pocket (or thereabouts).

3. Next, fold in thirds, like you did with the T-shirt and hoodie. The jeans should be able to stand up on their own.

Fold what can be folded - you will find much more space in your closet and drawers ✨⠀ ⠀ Do you fold your clothes using the KonMari Method? Comment with an emoji 🙋‍♀️⠀ ⠀ Photo by @thefreshlight. Marie Kondo

1. Lay the socks flat, one on top of the other.

2. Fold them not quite in half, so that the tip of the toe of the sock reaches just a couple of inches shy of the elasticated top of the sock.

3. Fold completely in half again. They may just about stand up on their own – but certainly will stacked vertically in a drawer with all your other socks.

That feeling when you can't wait to fold your new socks! Photo by @scott.a.urquhart. Marie Kondo

You can use this for folding towels and sheets, too.

1. Fold your towel in half lengthways.

2. Fold the halved towel in half widthways.

3. Fold into thirds, taking one end into the centre, then bringing the other end over it (so it's a flattened roll).

4. Do the standing test, as above. Now stack on shelves or in drawers.

A simple design that puts you at ease – this, too, sparks joy. Photo by @plandevida_co. Marie Kondo

You can watch Marie Kondo's tutorial on folding clothes on YouTube. Her books, The Life-Changing Magic of Tidying: A simple, effective way to banish clutter forever and Spark Joy are available on Amazon. See more brilliant storage ideas that we've found below.

In the meantime, here's a dog that appreciates Marie Kondo's method of folding clothes. Just because.

When your dog wants to come with you to the trip 🐶⠀ ⠀ Folding your clothes with the KonMari Method makes packing easier, since all you have to do is take your clothes out of the drawer and place it in the suitcase, just the way it was sitting in the drawer 💡Photo by @freshstartwithnicole. Marie Kondo

More on tidying up clothes: