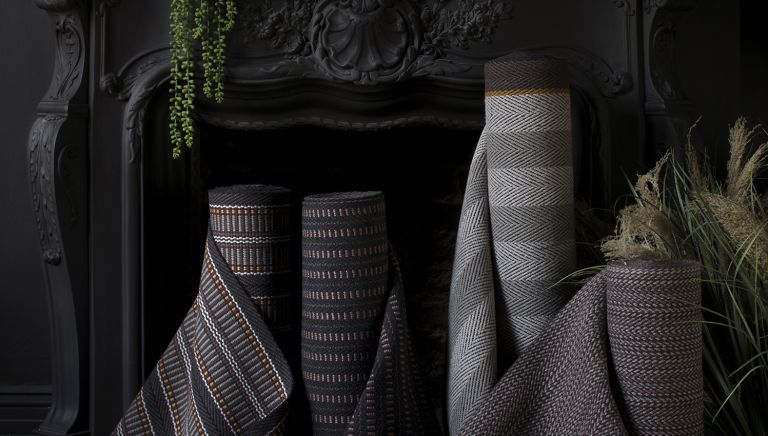 Once upon a time, having a light, bright, airy room, painted in pale hues and filled with neutral furniture was all the rage. However, in recent years we have seen a shift away from this the-whiter-the-better and a resurgence in dark, moody interiors, with paint manufacturers citing their most popular shades from light to dark, and dark, moody rooms trending on social media.

Interior designer Abigail Ahern was one of the first to go to the dark side, and it would seem that there are plenty of interior brands and designers who are willing to follow her – Roger Oates Design being one of them.

Renowned for their signature striped runners and rugs in vibrant colours and sophisticated neutrals, Roger Oates Design is dabbling in darker colour palettes, collaborating with Abigail Ahern to create a capsule flatweave flooring collection in deep, mysterious shades for Autumn 2018.

Although, clearly,  dramatically different, both companies are famed for their highly distinctive use of colour. The collaboration grew after Roger Oates' head of design Andy Guard met Abigail to discuss creating bespoke colours. Inspired by the subtle shades and depth of tone of the yarn, she immediately homed in on a very particular section of the palette bearing a striking resemblance to her own sultry paint hues.

‘The quality of the wool adds the most perfect luxurious touch to any hall or staircase and makes this space so much more than somewhere to just drop off your keys and walk through,' says Abigail. 'I now actually want to linger longer in mine; it’s the biggest game changer for hallways. '

(from left to right)

Malton Cinder: the combination of dark jewel tones against a dark smoke herringbone backdrop transforms this tribal design into something rich and indulgent.

Fitzroy Rosebriar: a departure from the original bright and monochrome colourways, the new hue consists of soft tonal stripes with a rich intense border.

Kobe Plum: re-worked with an unusual dark weft, drawing out the saturated colours found in the warp, as well as highlighting the flecks of antique rose and plum.

The collection will be available from mid September so keep your eyes peeled...