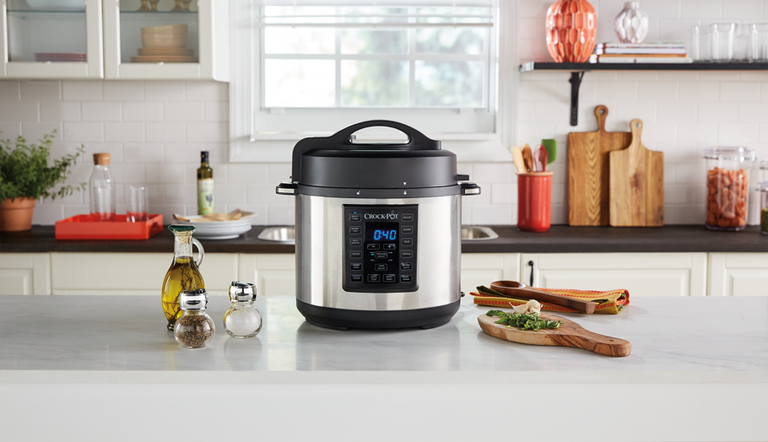 Think slow cookers are just for making soups, stews and curries? Think again: we started testing our top picks and discovered that we've been playing it far too safe: slow cookers offer SO much more than that – they're no one-trick pony, they can conjure up some very unexpected but fab recipes.

Here are six of our favourite slow cooker recipes that we'll be making this weekend – plus, below, some brilliant slow cooker deals, in case you're thinking about buying a new one.

1. Cook your breakfast porridge in a slow cooker

1. Place an oven proof dish into your slow cooker.

2. Put the oats into the bowl.

3. Cover the oats with the milk or water.

4. Turn the slow cooker on to its very lowest heat setting and set the timer for up to eight hours. Stir it with a wooden spoon if you're up and about while it's on.

5. Before serving, stir the porridge well and add more milk or water if it looks a little dry for your taste.

6. Ladle it into a bowl and pour over the extra milk. For a richer taste, you can also top up with yoghurt or cream. Top with the fruit, jam or honey. Eat immediately.

2. Whip up some yoghurt in your slow cooker

Yep, you read it right. We were just as (pleasantly) surprised as you are. You can make organic yoghurt overnight in your slow cooker, ready to serve up with fresh fruit and granola at breakfast time. This recipe consists of just two ingredients on your first try and then once you and your family are obsessed with home-made yoghurt and will accept nothing else, it's just one ingredient more... Sound too good to be true? We found a fab recipe at Bless this Mess. It is SO easy.

Pour some milk into your slow cooker and set it on low heat for around two and a half hours. Turn it off and let it rest for three. Then, stir in a little bit of yoghurt (from the batch before, or a commercial yoghurt, first time round) and pop the lid back on. Let it rest overnight and in the morning you’ll have your yogurt.

If you fancy a thicker Greek-style yoghurt, pop it in the fridge to let it strain in cheese cloth for a few hours.

Okay, this recipe may not be as super easy as the others but we're still not going to pass up on the opportunity to share the fact that you can make everyone's favourite BBQ slider in your slow cooker.

BBC Good Food has shared a delicious pulled pork recipe requiring a bit of mixing and searing but finished off in the slow cooker.

First rub the pork rub with a combo of salt, pepper, smoked paprika and cinnamon, then roll it in flour. Sear it on both sides and then chuck it in the slow cooker over some sliced onion. Pour a mixture of crushed garlic cloves, cloudy apple juice, black treacle, honey, onion marmalade and apple cider vinegar, put the lid on and cook on low for around eight hours. You've got to admit that sounds good.

4. Cook your Sunday roast in a slow cooker

Your Sunday roast will never be the same again. Where once you've might have worried about the chicken drying out, desperately tried to boil veg on the hob and make gravy, too, now you can chillax with something chilled while your slow cooker does the hard work for you.

Best way to cook a chicken in a slow cooker? If you want to jazz it up a little, rub salt, pepper and your favourite herbs over the breast skin, legs and thighs. Then brown the chicken breast side down. Turn to brown the underside of the chicken, then add chicken stock to the pot (a good 250ml). Again, if you want extra flavour, you can put garlic, onions, carrots, other root veg and even lemon juice beneath the chicken at this point. Put the lid on and cook – following your slow cooker's instructions for length of time. Remove all the bits you don't want in the gravy, add some cornflour and turn the cooker to the browning function to make a yummy gravy.

The only effort you need to make is ensuring your oven-cooked roasties match up.

Omggggg dessert in the slow cooker? Yes! If you're willing to put in 10 minutes' prep time, your slow cooker will slave away for five hours to give you the perfect cheesecake. We found this cheesecake on A Spicy Perspective and we can't get enough of it.

Parchment paper and non-stick spray will be your friends in this endeavour. Press your cracker crumbs (which you'll have already pulsed with butter) evenly across the bottom of your slow cooker. Then, pour your filling (made from cream cheese, sugar, sour cream, eggs, flour, vanilla and salt) on top. Cover and slow cook for five to seven hours – a skewer should come out clean if you're not sure it's done. Chill it in the fridge for about three hours, add toppings, such as fresh fruit, and you've got yourself a gorgeous cheesecake! How clever is that?

There’s no sugar added to this recipe: it relies on the natural sweetness of the apples and dried fruit, but we promise you’ll love the taste. If you want a treat, though, use a scoop of vanilla ice cream on top of the warm apples.

1. In a bowl, mix together dried fruit and nuts, and stir in the cinnamon.

2. Slice the top off each of the apples, and set aside. Scoop out the core – a melon baller is ideal here.

3. Stuff mixture into the apples and put the top back on each. Place the stuffed apples in the slow cooker.

4. Cook on high for about two hours, or low for around five hours, until the apples are tender.