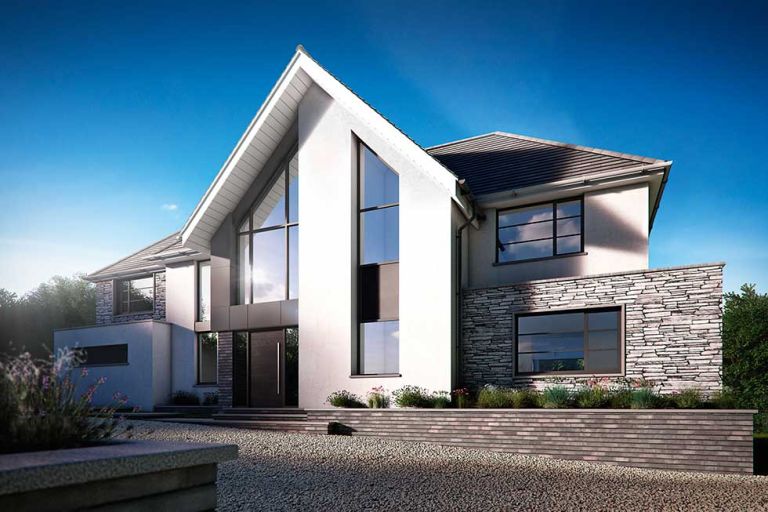 This two-bedroom bungalow in Hampshire (below) had a simple, square footprint. It was too small for a family, and despite there being a small terrace outside the back door, the link between the house and garden was poor, says architect Tony Holt.

Due to the slope of the site,  it would have proved expensive to add a large extension, so the best approach was to create a new first floor. Adding a simple duo-pitched roof allowed all of the bedrooms to be located upstairs, and has produced better-quality living spaces on the ground floor, too.

Downstairs, a small bedroom was combined with the original hallway to create a larger entrance space with a feature staircase and double-height vaulted ceiling. By removing the bathroom and toilet, and building a small extension, a large open-plan kitchen and living area has been created, stretching across the width of the rear of the property. A new utility has also been added to one side. The original master bedroom has become a second reception room.

Upstairs, there are three double bedrooms, two with en suites, and a family bathroom. A roof overhang has created a covered terrace with views of the garden, accessed from the master and second bedrooms.

This 1950s bungalow, near Wallingford, in Oxfordshire, (below) had a kitchen-living space, bathroom and three bedrooms on the ground floor, a fourth bedroom in the loft space, and a separate workshop to one side. The owners wanted a contemporary, light-filled house suitable for their growing family, and with a good connection to the garden.

Their budget dictated that the architects reused as much of the existing building fabric as possible. They developed a design that connected the bungalow and workshop using a bespoke glazed extension, producing a unique courtyard arrangement.

Related articles: The ultimate guide to extending your home | How to add a two storey extension | 10 ways to cut the cost of your extension

‘This three-storey 1960s property (below) had good proportions and was set in a great location in Cheshire, but there was one major problem – it was really ugly!’ says Alexandra Hull, managing director at Back to Front Exterior Design, the architectural firm behind the new scheme. ‘It had green roof tiles, mismatching brickwork, dated windows and services run all over the elevation, and it needed a complete modernisation internally, too. The house did, however, have great potential and the owners chose a traditional style for the renovations.’

‘When the enormous tent went up and the front elevation and roof came off the house, we realised the scale of the project,’ says owner Jo Glenton. ‘It became crystal clear why we’d been told that staying in the property through the build wouldn’t be an option. Moving out and the upheaval for us all was immense, and the time involved in changing every element of every room was massive.’

‘However, when the house was finally unveiled, the reaction from neighbours, friends and passers-by made it well worth it. We now have a house exactly to our specification and everything is brand new, but it cost us at least half of what a new house would have. The sense of achievement is great and, with the same brilliant team behind us, we’d probably do it all again.’

‘The first thing we needed to address was the slanted dormer and improving the shape of the roof structure,’ says Alexandra. This involved some fairly major surgery but was fundamental to the transformation, and it enabled us to change the proportions of the windows and flood the house with natural light.

‘Weatherboard and render dealt with the unattractive brickwork and allowed us to create harmony across the elevation with a soft colour scheme to tie it all together. The green roof tiles were replaced with natural slate to complete the look.’

Mark and Julia Swannell moved from Bedfordshire to Shropshire in 2000 after spotting this Georgian home for sale. They spent the next decade remodelling and extending it to create a Tudor-style family home.

‘We were looking for a design that would lower the height of the house visually,’ says Mark. ‘That’s where the idea for a jettied first floor with the steep pitched roof that is typical of Tudor buildings, came from.’

Julia and Mark, who is a joiner, had built their own home back in Bedfordshire, and were happy to take on most of the work themselves – from the design phase to pouring the foundations, erecting the oak-frame extensions to tiling the roof. After getting planning approval, they were able to add two three-storey wings onto the house, with the original two-storey building in the centre creating visual balance.

One wing, which has its own entrance for guests, now houses a ground-floor living room, first-floor kitchen and snug, two bedrooms

The original part of the house contains the hall, dining room, two more bedrooms and a bathroom. There’s also a cloakroom, utility, office and even a bar. ‘Attention to detail has been so important, it’s the small details which really make the house,’ says Mark.

This detached 1960s house was renovated inside and out to make the most of its amazing views. Because of its location in the New Forest National Park, there were limits on the maximum size the house could be extended to. The existing entrance hall and a garage conversion were therefore demolished and replaced with new structures of a similar size, while the interior was remodelled to reflect its contemporary exterior.

On the first floor, a new pitched-roof extension was added to create a fourth bedroom and en suite, with access to a sun terrace over the new entrance hall below.

All of the windows were replaced with glazed timber and aluminium composites to offer better thermal performance. ‘Additional insulation was also added to the roof and walls, with the walls then clad with timber shingles so that a homogenous design would be revealed once the extension was completed,’ says architect Darren Bray, from PAD Studio Architects.

‘We wanted to make our design unchallenging in terms of form, scale and materials while recognising the opportunity to create a modern home that enriches its local environment.’

When architect Will Lasdun bought this 1960s bungalow near Torbryan, in Devon, he faced two choices – knock it down and build from scratch VAT-free, or adapt and incorporate the original building into his plans. With a very narrow access track and nowhere else for his family to live, he opted for the latter.

‘It made sense to radically rework the layout of the bungalow because the first thing that struck us when we looked round was that the master bedroom was monopolising all the best views, overlooking fields towards the coast,’ explains Will.

A new open plan kitchen/dining/living space dominates the majority of the ground floor now, with a separate snug and games room alongside. Two bedrooms and a bathroom can be found in a mezzanine level above, and a new building where the garage once stood – connected to the main house via a glazed hallway – features a double garage, utility and workshop, with two en suite guest bedrooms and a studio above.

Mindful of costs, the logistics of getting new materials onto site, and keen to reuse as much as possible, Will made sure nothing went to waste. The original stone sections of the bungalow, for instance, have been given a new lease of life now they’re positioned next to the Western red cedar cladding and smart grey render.

‘The most valuable lesson I’ve learnt is the need to constantly hold onto the belief that, during all the stress of the build, one day the project will actually be finished!’ laughs Will.

This detached family home, located at the end of a cul-de-sac in Hertfordshire, had stood largely untouched since it was built in the 1950s. The rooms were cramped and a detached garage had been linked to the house by a poorly constructed infill. Architectural designer Tony Holt, of Tony Holt Design (tonyholt-design.co.uk), created a scheme for the family that would extend the property on all four sides, retaining the corners of the existing structure and much of the original roof.

On the ground floor, the staircase was relocated to create a double-height entrance hall that flows into a large, open plan kitchen/dining/living space at the rear of the house with full-height glazing that links to the garden.

Two further living areas were also created on the ground floor, along with a games room and home office. The garage was rebuilt and became part of the main house, with a replacement detached garage built elsewhere on the plot. On the first floor, three new en suite bedrooms were added thanks to the new extensions, while a master bedroom was created at the rear, with a dressing room and roll-top bath on a mezzanine area above.

Externally, the home was given a contemporary appearance by applying white render with accent materials such as brickwork, natural stone and small panels of metal cladding to help focus the eye on the main entrance. New powder-coated aluminium windows were added to complete the look.

‘The tired existing building has been transformed beyond recognition,’ says Tony. ‘The property has gone from providing 189 square metres of accommodation to 331 square metres. Externally, the house now looks and feels like it was built in the present day, and the contemporary palette provided by the stone, brick and render means that this new look should stand the test of time.’

The owners of this 1970s property wanted to transform it into a contemporary, energy-efficient five-bedroom home using natural, breathable materials, so called upon PAD Studio to draw up a design that focused on simplicity, quality and attention to detail.

The existing layout had a living room, kitchen-diner, utility and bedroom on the ground floor, with three bedrooms and a bathroom upstairs. A previous single-storey extension was an obvious starting point for change, and a contemporary, two-storey box extension was added in its place, containing two bedrooms, a bathroom, a playroom, cloakroom and an extended kitchen-diner.

A rooflight and floorlight were then added to the original building to help bring in more daylight.

Improving the property’s energy efficiency was another key priority, so insulation in the walls and roof was upgraded to exceed the U-value requirements of the building regulations. The windows were replaced, and solar panels were added to the sedum-roofed extension, supplying enough hot water for the family’s daily requirements.

All of the plumbing and electrics were updated during the refurbishment, with low-flush toilets, aerated showers and energy-efficient lighting by Aurora also included.

‘The outcome is a harmonious balance between old and new, inside and out,’ says architect Wendy Perring. ‘The house is warm, bright and welcoming, and gives the feeling of nature and home being one.’