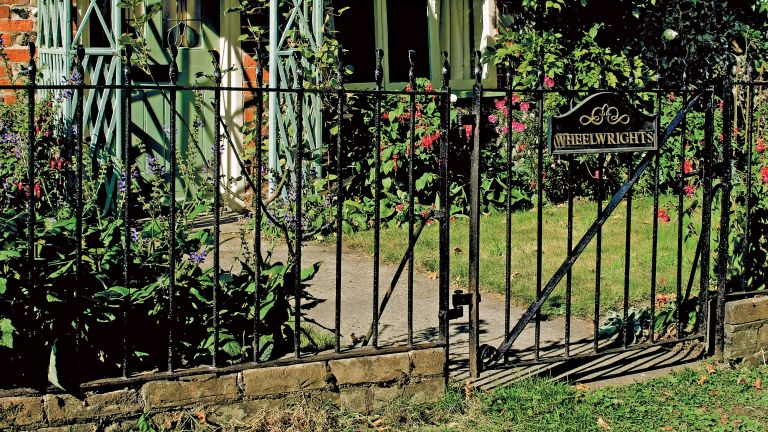 Many original iron railings and gates will have been painted, whereas others are left in their natural state to show off the beauty of the metal.

Find out how to repair, clean and repaint railings and other metalwork below, and also add them to your annual home maintenance check to anticipate problems before they arise.

Railings and other metalwork is vulnerable to damage due to fractures, rust and other forms of corrosion. All items should be regularly and carefully maintained and, where necessary, cleaned, painted and lubricated.

To ensure the best approach, try to identify the type of metal used. The ferrous metals – those containing iron – that are used in railings or gates are not always easy to tell apart, especially as they are often concealed under thick coats of paint and different metals are used in combination. For example, the decorative heads on wrought-iron railings are sometimes cast iron.

Iron is durable and, if regularly maintained, will last for years. But where paint has worn away, the exposure to water and air can quickly result in rust and decay. When iron corrodes it expands up to 10 times its original size, causing distortion and sections to be forced apart. Metal components set into stone can even cause the stone to fracture.

Chopping back overgrown vegetation, dealing with patches of corrosion and repainting chipped and peeling paintwork will avoid trouble in the future.

Where there is damage, avoid cheap repairs. They often use inappropriate materials such as aluminium or mild steel, while poor quality welding can hasten damage.

How to clean and repaint railings and gates

Regular finishing of ironwork such as railings and gates is essential to avoid rusting and decay caused by exposure to air and water.

Good preparation of the surface is essential and all loose paint and rust must be removed first.

Use a steel brush to get rid of all loose and old flaking layers of paint. This is important – the new paint won’t bond with the existing paint and protect the metal unless the railings are cleaned of loose rust and unsound paint. Brush away heavy algae growth and treat with a sterilising solution, then leave for 24 hours and rinse off.

Check the bottom of the railings, scrape away moss and clear away weeds. Sometimes there is a gap between the brick plinth and the bar at the bottom where debris can collect. This becomes a moisture trap encouraging corrosion as the metal never has the opportunity to dry out. Investigate and clean with the scraper.

Existing paintwork must be ‘keyed’ or roughened with medium grade abrasive paper to create good adhesion for the new paint. Wet and dry paper used with water prevents the paper ‘clogging’. Wet sanding is also advisable as it reduces dust. For a smooth finish rub around the edges to avoid ‘steps’ on the new paintwork.

4. Clean away grease and grime

Wearing gloves and using a clean cloth, wash the railings thoroughly with a solution of sugar soap dissolved in hot water. This will get rid of all the dirt and grime and any greasy deposits, too. Once the railings are completely clean, use a new cloth and lots of water to rinse away the dirty suds.

5. Prune nearby plants and test paint

Cut back all vegetation that comes into contact with the railings. If painting over existing paint you must ensure that the new paint is compatible. Paint a trial section and leave overnight. Hammerite can be painted directly on to the metal without a primer, but if you’re using a gloss paint, the metal must be rust-free and then protected with two coats of zinc-based primer.

Use some large sheets of cardboard to prop behind the railings to protect plants. Hold in place by pushing canes into the ground on alternating sides of the board.

Fix old newspaper to brick plinths, pillars and paths using masking tape. Check the weather forecast: a warm slightly overcast day is best; don’t paint when wind or rain are predicted and avoid the months from November to February as it will be too cold and damp for the paint to cure properly.

Brush on two coats of paint, following the manufacturer’s instructions regarding the length of time between coats. The first coat can become pitted if the second is applied too soon and two thin coats are more effective than one thicker one. If you have a lot of railings you may prefer to use a spray gun.

Removing layers of paint from railings

The fine detail of metal items is often obscured by accumulated paint layers, so these may need to be removed. Use brush applied chemical strippers or peel-away poultice systems, following the manufacturer's instructions. Hot air guns will not work with metal as the heat quickly dissipates.

When removing paint from railings, shot blasting or flash flame cleaning methods may be suitable if undertaken by a professional experienced in conservation work

How to repair railings

Regular maintenance and repainting of railings and other metalwork is the best protection against rust and deterioration. Other potential problems include the fracturing of cast iron because of impact or casting flaws, and the distortion of wrought iron.

Where deterioration has occurred, wrought iron can be repaired by cutting out defective lengths and welding in new pieces in a similar material. Recycled wrought iron is available but there has been no new source in the UK since the 1970s.

Bear in mind that repairing railings is a skilled job requiring considerable craftsmanship. Contact a blacksmith who will carry out new work on a like-for-like basis.

Use undamaged pieces of cast iron to provide patterns for new castings. Contact foundries as some still hold traditional patterns in stock.

You can also search architectural salvage yards for replacement items.

When to replace ironwork

Occasionally, where there is vehicle damage, for example, replacement may be the only option. New cast-iron and mild-steel equivalents can be readily obtained and, if carefully forged, mild steel is hard to distinguish from wrought iron.

For a period-style finish, it is best to use traditional methods of assembly rather than arc welding, which is the method that’s commonly used today.

Bear in mind that many products sold as being of ‘wrought iron’ today, such as gates, are actually fabricated from standard sections of steel welded together. While perfectly serviceable, these borrow little from the genuine traditions of the blacksmith.

A short history of iron railings

Wrought iron began to be widely used to create highly decorative items, including gates and screens, in the 17th and 18th centuries.

Until technological advances in the Industrial Revolution brought about the mass production of wrought and cast iron, items were made on a modest scale by local blacksmiths

Once it became more widely available, and within the means of the growing middle classes, it soon became a favoured building material for use as a decorative boundary.

Cast iron became popular following the invention of the cupola furnace in the 18th century. This enabled liquid iron to be poured and cast into moulds in a foundry. Castings were frequently joined together by nuts and bolts or by interlocking the parts.

Cast iron is brittle and weaker in tension than wrought iron but is quicker and easier to make. Components have a deeper profile and more repetitive appearance. Unlike wrought iron, cast iron has never entirely been superseded by steel.

Wrought iron has a more delicate appearance and, as each piece is formed individually, there is more opportunity for slight variations in the finished piece.