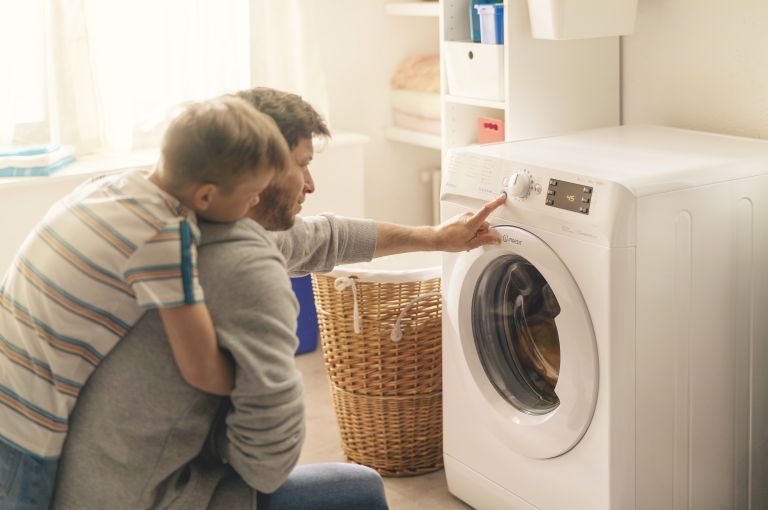 How equal is your home? While (most of us) have come a long way since the days when cooking, cleaning and other household chores were considered, exclusively, 'woman's work', new research carried out by domestic appliance manufacturer, Indesit, suggests than 76 per cent of women are still doing the vast majority of household chores.

While we can't decide whether or not we're surprised by this stat, we are certainly alarmed and, as such, eager to support Indesit's #doittogether campaign, which launches this month and aims to redress this imbalance by encouraging families to think about how chores can be distributed, more evenly.

The study, which aimed to explore how modern families approach everyday challenges in the home and the importance of involving children in household tasks, produced staggering results and highlighted the importance of ongoing action to address gender imbalances. So-called 'Chore Wars'. Here's what Indesit discovered, from the 2,000 adults, surveyed:

Unfortunately, this study only confirmed what many of us probably know, anecdotally, to be true: that women still tend to take the lead when it comes to completing household tasks, despite many holding down full-time jobs, too.

Commenting on the study, Sara Bazeley, Brand Manager at Indesit, says, 'We conducted a survey to learn more about family life, how chores are delegated and why parents chose to involve their children in the housework. Parenting is vitally important to the equality story, as many of today’s gender roles are learnt when we are children. Parents are the role model for their children, who learn about sharing, respect and responsibility from what they see and experience in the home.

'At Indesit, we are committed to designing easy-to-use, family-friendly appliances that are accessible to all users, ensuring that domestic tasks don’t require any special knowledge, meaning sharing chores is made even simpler.'

Rather than simply accepting this, Indesit have decided that it's time to take action by encouraging parents to set a better example to their children and encourage gender balance in domestic chores for the next generation. Their top tips include:

Whether it's a bit of pocket money, the opportunity for increased independence or something more specific to your child, using incentives is one of the easiest ways to encourage children to help out around the house more.

According to research this encourages a child's sense of responsibility and, ultimately, ensures that children actually know how certain household tasks are completed, as it's this lack of knowledge that perpetuates imbalances when it comes to completing household tasks.

2. Ensure appliances are easy to use

Another trick to encouraging children to get involved in household tasks is to start small, ensuring appliances are easy to use. After all, minimal effort tends to be most people's default setting.

Easy-to use appliances from Indesit include the Innex washing machines, which require the push of a single button for effective activation. When it's that simple, there really is no excuse for the whole family not to get involved, irrespective of age or experience with appliances.

3. Involve kids in the planning process

Your kids are more likely to take interest in cooking if they've been involved in the planning process, which is where Indesit's newly launched Turn&Cook app comes in.

Available on both Android and iOS devices, users can simply snap a picture of their key ingredient and the app while auto-generate recipe ideas and inspiration. That's something everyone can get involved with, no matter how old or how experienced they are in the kitchen.

Are you aware of the fact that you – or your partner – do significantly more of the household chores? It might be worth asking yourself this question and you, or your partner, don't like the answer, put a plan of action together to make a change. #doittogether

For further information on easy-to-use appliances or the #DoItTogether campaign, check out Indesit.