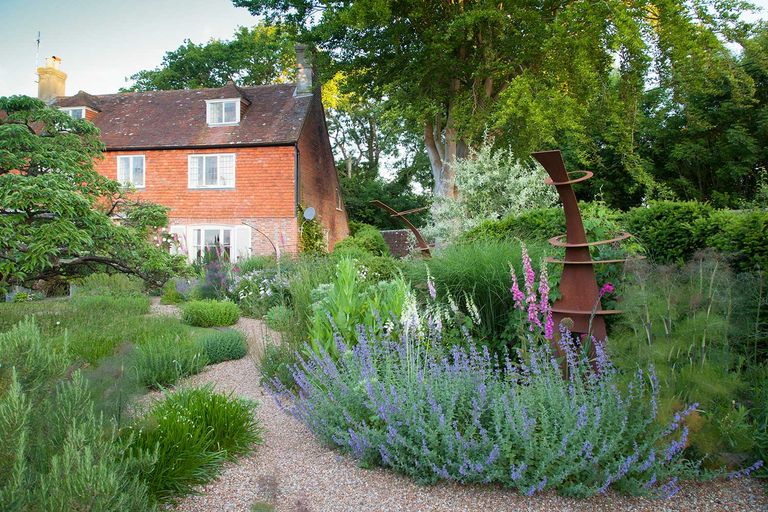 Located a mile from the coast, it’s far enough away from the sea that plants don’t have to cope with excessively salty air, ‘but because we are quite high up, strong winds are a constant feature here,’ says Chris Hutt, who bought the property in 2003 with his wife Robin and then spent a year renovating it before moving in. ‘The winds sweep in off the Channel and come battering their way through the garden, so the planting has been designed with that in mind.'

Read on to find out how Chris and Robin transformed their plot, or find more inspiration on how to make the most of a small garden with our ideas feature.

The three-acre garden slopes in two directions – from back to front and from side to side, making it a challenging plot to work with. ‘It’s a very odd and wonky piece of ground,’ says Chris, ‘and the fall from top to bottom is considerable but, strangely, that’s what drew me to it when I first saw it – I don’t know why; most people felt it would be far too quixotic to make a good garden!’

With the renovations on the house complete, Chris spent four years trying to resolve the problem of having so many slopes and levels to contend with outside. Eventually, however, he was forced to admit defeat. ‘With the benefit of hindsight, I should never have tried to do it myself,’ he says. ‘You need to know what you’re doing and it quickly became obvious that I didn’t, so I made a mess of it.’

He subsequently brought in landscape architect and garden designer Ian Kitson to help, and it’s a partnership that’s endured to this day. ‘His solution to the problem of the slopes surprised me, but now that he’s been working here, on and off, for many years, he’s surprised me many more times. His approach is what you might call idiosyncratic,’ says Chris, smiling.

The most obvious idiosyncrasy here is a sinuous Corten steel wall that cuts across the main part of the garden. The metre-high wall, which gives an infinity effect to the lawn – like a contemporary interpretation of a ha-ha – is striking and surprisingly contemporary in a garden that at first glance is classically and delightfully English. But it works brilliantly, both visually and practically, creating a defined change of level and a wonderful planting space.

In summer, wildflowers create an exuberant, joyful feel below it, and a south-facing seating area benefits from its reflected heat, with the planting around it enveloping anyone who pauses to bask in the sun.

The original idea was to use box plants at the base of the wall, but as there are so many problems associated with box these days, 80 dwarf mountain pines were used instead. ‘I didn’t want to have to spray the box and risk poisoning insects and birds at the same time,’ says Chris. ‘The dwarf mountain pines work well as alternatives and just need clipping back into their dome shapes once a year.’

Above the wall and closest to the house is the lovely upper garden, with an ancient cherry tree as its centrepiece. Now propped up with chestnut supports, it’s underplanted with wildflowers encircled by a neatly mown strip of lawn.

‘We like the contrast between the ostensibly wild and shaggy flowers that appear to have been left to their own devices, and the obviously cared for and tended lawn – it’s a contrast that we play with throughout the garden,’ says Chris.

In the beautifully planted herbaceous borders are three striking steel sculptures specially designed by Ian Kitson. In summer, the sculptures gradually start to disappear into the surrounding planting and act as supports, before re-emerging again in winter as focal points.

At the other end of the house, a series of steps lead down to Chris’ study. It’s surrounded by self-sown foxgloves from the meadow below it, and in fact, ox-eye daisies and foxgloves sow themselves throughout the rest of the garden, too. ‘We love self-sowers,’ Chris says. ‘They fit in with the overall feel of the garden, which is intended to be relaxed rather than primped.’

To one side is a kitchen garden, home to 30 productive raised beds planted with a mixture of vegetables and flowers for cutting. A wedge-shaped gravel garden runs back towards the road, where the white blossom of the ornamental pear Pyrus salicifolia takes centre stage in early summer, with splashes of colour from pink foxgloves and acid-green euphorbia.

A south-facing wall is cloaked in the white rose ‘Open Arms’. ‘Not many people know this rose,’ says Chris. ‘It’s unusual because, unlike most ramblers, it repeat flowers and can be in bloom from June to October.’

Below the upper garden, and initially hidden from view by a wide hedge, is a delightful surprise – a wide expanse of wildflower meadows, an orchard and two vast ponds that make a great contrast to the cultivated areas above. The overall effect is very natural, but that belies the hard work that has gone into the making of this garden.

Due recognition came in 2015, when Fairlight End received an award from the Sussex Heritage Trust. The judges’ comments say it all: ‘A thoughtful and beautiful integration of the countryside and garden landscape with contemporary elements. Sculptural pieces complement the listed house and old character trees add a timeless feel to the new plantings.’

Creating a garden that succeeds in feeling simultaneously modern and timeless is quite a feat to achieve, but it’s one that Chris Hutt – with the help of Ian Kitson – has managed to pull off wonderfully well.