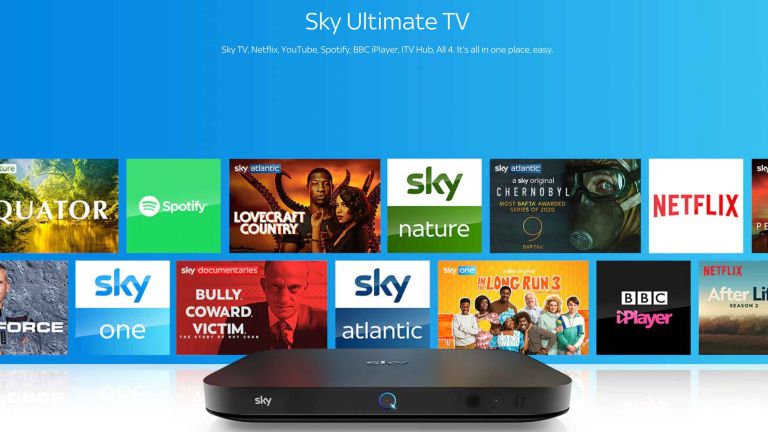 Looking for the best Sky deal for August 2020? We have you covered. Not only are Sky one of the best broadband providers in the UK, but they love to offer incredible deals, year-round. On both broadband-only and TV + broadband packages, too.

We've popped every single best Sky deal around today, that we think is worth a look at, below. This way you can decide what you want – whether that be Sky Sports, Kids, Cinema or just broadband – and pick a package that suits you dependent on price. All in one place.

See Sky's best current broadband deal – Superfast Broadband, Sky TV & Netflix – just below with £15 off its monthly price. This deal could end at any time, so if you are interested it's best to buy ASAP. Scroll to see.

Use the links below to navigate this page by section.

Can't get Sky in your area? Head to our broadband deals page for more affordable offers.

Both Sky broadband deals below are on an 18-month contract and they have a setup fee of £9.95, unless stated otherwise.

All these Sky broadband + TV deals are on an 18-month contract with a £39.95 setup fee, unless stated otherwise.

Superfast Broadband, Sky Sports & Cinema | 18 months | 59Mb | £64 per month | £39.95 setup fee
This now affordable Sky deal has it all. We're talking broadband that averages speeds of 59 megabits per second, access to both Sky Sports and Sky Cinema channels and it comes with Sky Q – you can watch BBC iPlayer, 40D and more. Reliable, unlimited and a bargain.View Deal

Type in your postcode below for more Sky packages in your area.

Sky's starter TV package – Sky Ultimate TV – is currently just £25 per month. Once you have this package, you can then begin to buy add-ons such as Sky Kids, Sky Cinema and more. Read more info below.

Sky Ultimate TV | 18 months | £25 per month | Setup fee: £20
Named Sky Ultimate TV for a reason, this package really does include it all. We're talking Sky TV, Netflix, YouTube, Spotify, BBC iPlayer, All 4 and ITV Hub all in one place. Brilliant. Then there's the added bonus that with Sky TV comes 2,500 series – that's 27,000 hours of TV – as well as access to Netflix original shows and the Sky Go app so you can watch while out and about. After opting into this package you can add channels such as Kids, Sports and Cinema, as you please.View Deal

Sky TV deal add-ons are much easier to understand now that they can be purchased individually. You can build your own bundle below, making sure you're not paying for anything you won't watch, and it'll save you money. Scroll for extra details about each add-on to help you decide if you truly need them.

All packages below are on an 18-month contract.

HD | £6 extra a month
One of the most essential add-ons in our eyes, this HD extra means you'll truly appreciate your TV's quality. Sometimes, Standard Definition (SD) just isn't enough as it can appear extremely blurry on modern HD or 4K TVs. Bringing not just brighter colour to the picture, for just an extra £4, you can also enjoy an extra five times the detail on 35 channels including Sky Atlantic.
View Deal

Kids | £5 extra a month
Parents, rejoice! The small price of £5 a month not only keeps the kids quiet with over 5,000 episodes of TV programmes but also lets them watch a further 11 channels of kid's live TV. This way, you won't be scrolling for hours trying to find 'that dinosaur programme', and it can be screened on tablets via the app. Let Saturday night Strictly watching re-commence.
View Deal

Ultra HD | £10 extra a month
Ultra HD is four times better than HD – it's clearer and sharper. This way you can watch your favourite channels in UHD, including Netflix.View Deal

Cinema | £11 a month
Slightly more expensive than other add-ons, but for good reason, Sky's selection of recent movies gets a new addition every day, and they're all in HD. With over 1,000 films to choose from, if you find yourself choosing a film over a TV programme when browsing what to watch, forget the individual HD add-on and just get this. Although it's more expensive than Netflix and Amazon Prime, we think it's worth it.
View Deal

Multiscreen | £14 extra a month
For those who have several screens in their house and want to watch Sky TV channels from them all, opt into for Sky Q Multiscreen for an extra £14 a month. This way you can pause on one screen and pick up on another. Ground-breaking.
View Deal

Sports | £23 a month
Ready for all the sports? If you know you'll be glued to the action throughout the year, you can get all the Sports channels you need for just £23 a month. Not only Sky Sports channels, but Premier League, Football, F1®, Cricket and Golf, too. Your ticket to watch the biggest sporting events in 2020 in stunning HD.
View Deal

What channels do I get with Sky TV?

As well as the usual TV channels that you get on Freeview  – BBC channels, ITV channels, Channel 4, Channel 5 and more – you can watch all of these channels below...

If you're signing up as a new customer, all Sky TV packages include a Sky Q box by default. This box lets you: store up to 500 hours of TV and films at one time; record six shows and watch a seventh at the same time; pause, rewind or restart live TV.

In more recent news, Disney Plus is now on Sky Q! This means that you can select Disney Plus as part of your Sky package when joining, and it'll come out as one bill for both. Alternatively, you can sign up below – there's a free seven day trial on offer – and pay separately but still watch on Sky.

Disney Plus | FREE 7 day trial
Opt into a Disney Plus free trial now and enjoy seven days of the best TV for free. We've not even got to the best part yet – Disney+ subscribers will get access to never seen before movies, series, documentaries and more. Some of our top content picks include the new Aladdin, Star Wars the Mandalorian, 10 Things I Hate About You, Toy Story 4, and not forgetting Avengers: Infinity War of course.

Sky go is also now included as standard. This gives you the opportunity to take advantage of your Sky TV, even when out of the house. Download the Sky Go app to watch live TV anywhere on your mobile, laptop or phone. You can also stream shows live and on demand and seamlessly switch between devices with ease. From phone to TV in seconds.

How to get these deals?

Clicking on any of the 'view deal' buttons above will take you to the Sky website, where you can add deals and packages to your cart as you wish.