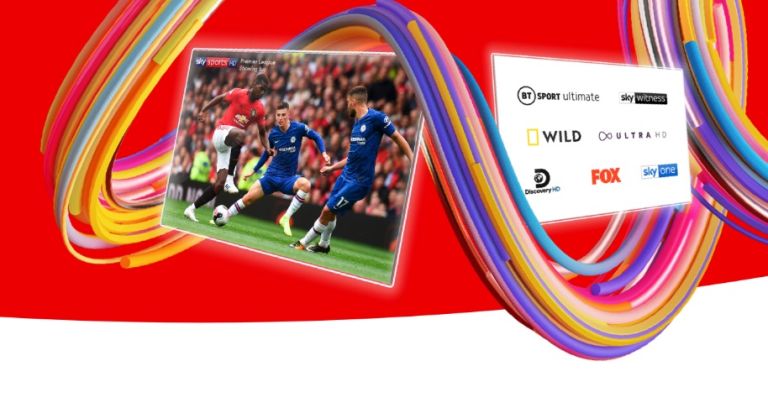 These Virgin Media deals are the kick-start we need this March. After all, who can argue with a free case of wine. If you've been thinking about changing broadband and TV provider for a while, let this be the sign you need to finally make the switch.

Packages start from only £33 per month – this price includes broadband, TV and line rental – or for broadband-only from £29 per month. Bargains all round. It's the only way to bag one of the best broadband deals around at a cheap monthly price while guaranteeing a freebie at the same time. Winning.

You can use the links below to jump to what you want to see:

All Virgin Media deals are on a 12 month contract and have a setup fee of £35. The free wine offer ends Wednesday 4th March – get in quick.

Head over to our broadband section for more news on price drops or freebie alerts. We know a good broadband deal when we see one...

M100 Fibre Broadband | 108Mb | £29 per month
This broadband deal has double the average speeds of the last package, making it ideal for busy households with five to nine devices inside. It's also the same price per month but it doesn't include line rental. Total price for one year: £348.View Deal

M200 Fibre Broadband | 213Mb | £34 per month
This Virgin Media package is a bargain. For just £32 per month, you'll get incredibly strong Wi-Fi speeds and line rental on weekends. Bargain. Total price for one year: £408.View Deal

M350 Fibre Broadband | 362Mb | £39 per month
This is the strongest broadband-only package Virgin Media offer, and it's the UK's fastest widely available broadband with average Wi-Fi speeds of 362Mb. Total price for one year: £468.View Deal

Big Bundle | 54Mb | £33 per month
This package is Virgin's cheapest broadband and TV bundle for those who want the best of both worlds. The Big Bundle comes with 110 channels, free line rental on weekends, broadband at 54 megabits per second and a V6 box to pause, rewind and record TV.  It also comes with eight bottles of wine included. Total price for one year: £396.View Deal

Big bundle + Drama Pick | 108Mb | £38 per month
This Virgin Media deal is a great pick for those who love their drama programmes. From Comedy Central to Sky Fox and Sky One, there's a range of 161 programmes for you to watch. Wi-Fi speeds are a strong 108Mb while weekend calls are included, as is the free wine! Total for 12 months: £456.View Deal

Bigger Bundle | 108Mbs | £45 per month
108Mbps is definitely fast enough to fuel a family's internet usage, while the fact it comes with 230 channels is a huge bonus – this includes Sky News and BT Sport 1. Did we mention weekend calls are in this package, too? As is eight bottles of wine. Total price for 12 months: £540.View Deal

Bigger + Movies bundle | 213Mb | £60 per month
Love a movie night in? This is the Virgin Media package for you. It includes Sky Cinema so you can watch box office blockbusters from the comfort of your sofa. It also comes with high Wi-Fi speeds of 213Mbps, line rental and 16 bottles of wine. Total price for 12 months: £720.View Deal

Bigger Bundle + Sports | 108Mbs | £65 per month
Have a die-hard football or rugby fan living in your home? This is the Virgin Media deal for you. Wi-Fi speeds are fast at 108 megabits per second, while this package also includes Sky Sports HD and 240 other channels. Oh, and don't forget the free wine. Total price for 12 months: £780.View Deal

Ultimate Oomph Bundle | 516Mb | £79 per month
This Virgin Media deal is made for those who a) want it all and b) live in a verrrry large household. Wi-Fi average speed is a whopping 516Mbps, and Sky Sports HD and Sky Cinema HD are included too, as well as 260 other channels. Even better? All day everyday line rental is in the price, as is a SIM card that has unlimited texts, minutes and data. Oh, and you'll get a FREE case of 16 bottles of wine if you subscribe NOW. Total price for 12 months: £948.View Deal

Type in your post code for more broadband deals...