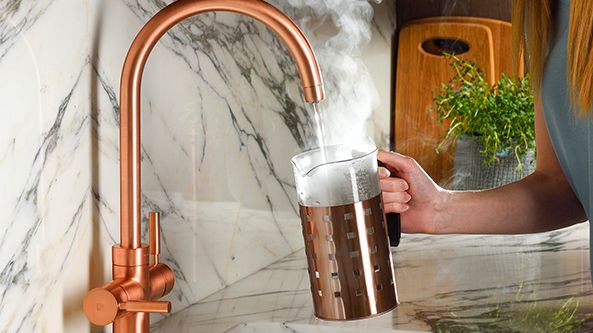 Boiling water taps deliver instant hot water, meaning you’ll never have to boil a kettle again. But are they worth the spend? What benefits, other than speedy service, can they offer, do they all dispense boiling water, how much do they cost and should you include one in your kitchen transformation?

Find out about all the pros and cons of boiling water taps here. You can use our price comparison tool to find the best deals, too, but if you want to see all our top picks, then browse the best hot water taps and boiling water taps – which includes every make from Quooker to Franke and Abode.

These taps sit on the worktop, have to be plumbed in, and the water tanks need to be connected to electricity to work, so it's best to hire a professional fitter to install them. Boiling water taps can be retro-fitted into an existing kitchen, but they’re more usually installed as part of a kitchen revamp. Fitting costs are sometimes included with the tap so check before you buy.

No more waiting around for the kettle to boil, no more realising there’s not enough water in the kettle for that pasta pan. You simply fill your cup or pan directly from the tap.

These taps can dispense either cold and boiling water; cold, hot and boiling (or nearly boiling) water; or cold filtered water, mains cold and hot water, and boiling water. This means you can have one tap to replace not just the kettle but traditional kitchen taps, too. Perfect if you're designing a minimalist, contemporary kitchen or have little worktop space in a small kitchen.

5. Boiling water taps can come with a flexi hose

Some boiling water taps come with a flexi, pull-out hose, which can be really handy for cleaning the sink or for filling a pan on the worktop at the side of the kitchen sink.

How? Some of these taps can dispense chilled fizzy water, so you can instantly reduce plastic bottle usage and make more space in the fridge, too.

Make sure you buy a child-friendly tap: the sides of these taps don’t get hot and the child-proof functionality means kids can’t turn them on by mistake, and neither can adults. Some, like the Stiebel Eltron Undersink Water Boiler and 3-in-1 tap come with a child lock.

8. Boiling water taps are good for people with mobility problems

No more lifting, filling and pouring from a heavy kettle.

Better models will filter the water from your tap, removing nasty-tasting chemicals. Some will also aerate and soften the water for you, ideal if you live in a hard water area.

Remember what we just said above? Bear in mind that limescale-control units cost extra: Quooker’s is around £245, for example. Without a limescale control unit, like a kettle, the tap and tank will still need to be cleaned of limescale. Some boiling water tap manufacturers recommend a descaling solution to clean the interior of the tank, but check before you use on in case you invalidate your warranty. The tap's nozzle will also need cleaning of limescale. Only use recommended limescale removers so that you don't damage the tap's material.

Filters need replacing, too. Grohe’s Red Duo, for example, needs its filter replaced every 600 litres at a cost of £64 per filter. Look for a model, such as Franke’s Omni tap or Qettle's 4-in-1, which have a warning light that flashes when the filters need replacing. Follow your manufacturer's recommendations when it comes to filter replacement (usually every six to 12 months); if you don't you might invalidate your warranty.

Want a range of temperatures on tap? Look for a boiling water tap with an adjustable temperature. For example, Michel Roux’s Monaco tap has a touchscreen to let you adjust the temperature up to 99°C.

12. Boiling water taps come in a range of finishes

Just like traditional kitchen taps, these taps can come in a range of finishes, from chrome to brushed copper, to suit your scheme. Not all taps are available in all finishes; basic chrome is cheaper than more adventurous finishes.

13. Are boiling water taps cheaper to run than kettles?

While a kettle costs around 2.5p per boil, Quooker says that their boiling water taps cost just 3p per day to run on standby. Quooker does not use boiler technology, but instead uses a unique patented vacuum flask tank, which holds water under pressure at 110°C, so that it is dispensed at a consistent true 100°C boiling.

14. You'll have to sacrifice cupboard space for the water tank

Boiling water taps have tanks that usually sit below the kitchen sink in the cupboard you might use for cleaning product storage or the kitchen bin. Before you buy, and decide if you’re buying the right model to suit your family’s needs, check how big the tank is. Smaller ones, like Abode's Pronteau 3-in-1, have a two litres water capacity; larger ones, which can hold 11 litres, are bulkier.

A small tank will suit most families’ needs. Unless, that is, you regularly consume more than a couple of litres of tea at a time. Tanks usually heat up again within a few minutes, should that be the case – check your tank's reheat time before you buy.

More on kitting out your kitchen: