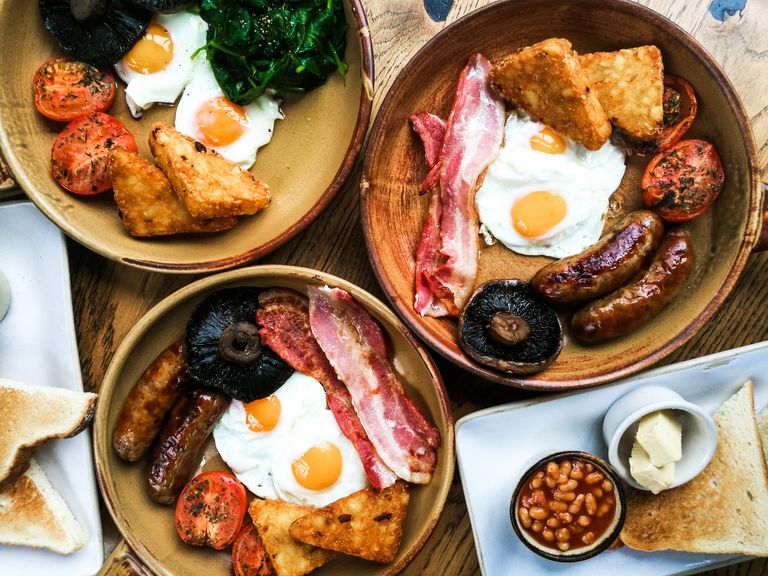 Hash browns are not just an extra that you throw on your English breakfast. When made well, they can be the star of the show – the centrepiece, topped with an egg, sunny-side-up, or served with smoky beans and crispy bacon. For a vegan breakfast, stack with herby garlic mushrooms and roasted tomatoes. Yum.

There are a couple of ways to make hash browns and we will walk you through them below, but the traditional method is to make little potato cakes out of leftover cooked potato. It is the perfect Sunday morning treat if you boiled too many potatoes for your Saturday dinner.

When you look for hash brown recipes online, a lot of the results are for more of a potato rosti, made with grated raw potato instead. They can be served in the same way, but tend not to have that crunchy texture we love from a hash brown. Still, they are easy to make and so we have a quick recipe for them here, too. They can be a quick alternative if you haven't got precooked potato.

For loads more recipe ideas – including breakfasts – head to our food hub.

How to make hash browns

If you have cooked potato leftover then skip to step three. If not, you can still make tasty hash browns in no time. You need floury potatoes for this. Leave the skin on if you like (it adds texture), but peeled are also fine.

1. Scrub the potatoes and peel if preferred. Cut in half and bring to the boil in a pan of salted water. Boil for five to 10 minutes until softened, but not crumbly.

2. Drain the cooked potatoes and allow to cool. They need to be cold and dry, or they will fall apart when you try to make your hash browns.

3. While the potatoes cool, finely dice the onion and pan fry it in a bit of oil or butter until soft. Remove from the heat and set aside in a large mixing bowl.

4. Dice the cold cooked potatoes into small chunks. Add to the bowl with the onions, season to taste with salt and pepper and combine well. Don't worry if a few bits of potato break – this helps bind the mix.

5. Heat a large frying pan on a medium-high heat and add a splash of oil/butter. The easiest way to cook your hash brown is as one big cake which you then cut into quarters. Fill the pan with the mix and press it down. Turn the heat down a little and cook for 15–20 minutes, turning halfway. To turn, tip onto a plate and then put back in the pan the other way up. Once done, cut into four and serve while hot.

6. Alternatively, for smaller, crispier hash browns, shape and press small handfuls of the potato mix into patties. Fry these for five to 10 minutes a side. If you like, you can bake them on a greased baking tray instead in a medium–high oven for about 20–25 minutes.

How to make McDonald's hash browns

1.  Grate your potato and pat dry with a paper towel before transferring to a clean tea towel. Give a gently to squeeze to drain off any excess water remaining. This is the trick to ensuring you achieve the crispy finish you're after.

2. Mix your potato with a beaten egg and season with plenty of salt and pepper.

3. Use clean hands to shape your potato and egg mix into something resembling a McDonald's hash brown.

4. Shallow fry in vegetable oil on a medium heat, flipping when the underside is golden brown.

5. You can then add even more oil to the outside of your hash brown if you're willing to go the extra mile to replicate that yummy McDonald's taste.

How to make potato rosti

Potato rosti requires the same ingredients, but you don't have to cook the potato first. This leads to a very different texture – the potato is more al dente and not fluffy in the middle with a crunchy outside like a hash brown. It is much faster than hash browns though, so give it a go if you have less time.

1. Grate your potatoes and finely slice your onion.

2. Put the grated potatoes in a clean, dry tea towel and squeeze out as much moisture as possible. Put the potato in a bowl with the onion and some seasoning, then mix well. If you aren't vegan, you can add an egg to help bind and colour the mix, but this is not essential.

3. Heat a couple of tablespoons of oil in a large frying pan, on a medium-high heat. Spoon in a large tablespoon of mix for each rosti, keeping them well apart in the pan. Press down slightly to make a thin patty about 1cm thick.

4. Cook for about three minutes per side and cook the next batch. Keep the rest warm in a low oven as you cook them all, then serve.

How to serve hash browns