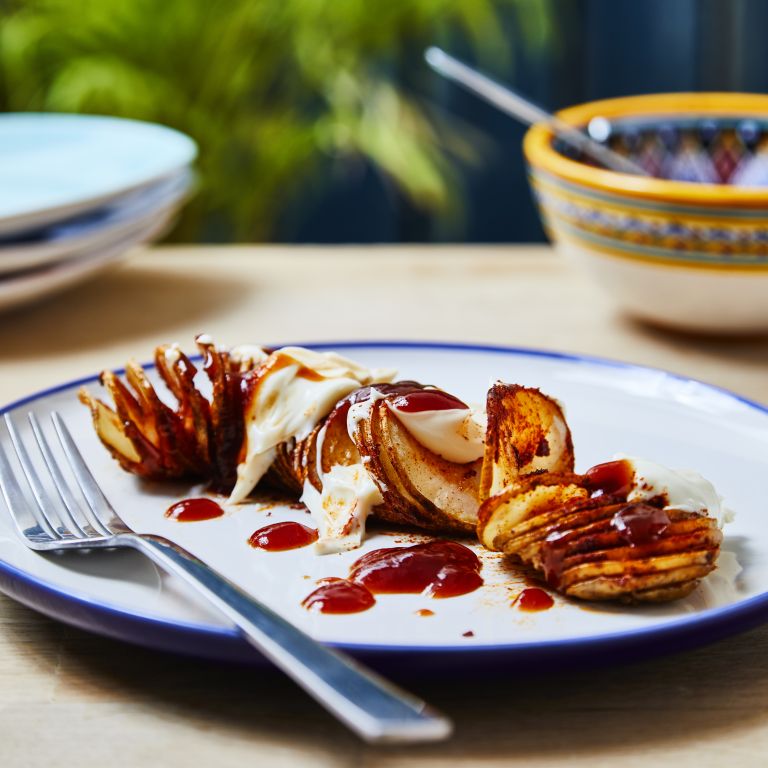 The best potato recipes tend to be simple ones that make the most of this versatile, affordable and hearty food. From comforting mash, to the most amazing triple-cooked chips, we have tried them all – or we thought we had until we came across these...

Of course, a lightly boiled new potato with butter and herbs is a thing of beauty, and you can't beat the best roast potatoes, but how about trying something new? These potato recipes can be exciting side dishes, but many are what the potato really deserves – being the main event of the meal.

Thanks to Jordan Moore, Senior Recipe Developer at Gousto for sharing these easy potato ideas with us. They really will have you working potatoes into every meal of the day and will help you out when the cupboards are looking a little bare.

50% off your first box at Gousto
Make dinner time easy with hundreds of tasty, healthy recipes to enjoy, delivered straight to your door. Those who are new to Gousto can enjoy 50% off their first box when they sign up. You will also get 30% off your first month. So that means you could get your first two meal box for two for as little as £12.50.View Deal

I'm putting it out there, the hash brown is the best part of a full English. And so we think that it is time we all learnt to make our own. Then it gets to shine simply topped with an egg or maybe a dollop of sour cream and chives. Or for vegans, serve with garlic spinach, avocado and vine roasted tomatoes – it's the perfect candidate for a breakfast-for-dinner type meal. Jordan from Gousto's top tip is to squeeze all the moisture from your spuds for the crispiest hashy-Bs. Just gather in a clean tea towel and press out all the extra starchy liquid.

1. Grate the potatoes into a tea towel. Gather the edges and wring out over a sink.

2. Peel and finely chop the onion

3. Add the beaten egg (or flour for non-egg) to the potato, along with the onion Mix well and season.

4. Put a good glug of oil in a frying pan over a medium heat. When hot, add spoonfuls of the potato mix and flatten each into 1cm thick patties.

You might have seen these tasty tornado potatoes doing the rounds on Instagram. They look cool, but taste pretty amazing too and you can treat them like a jacket potato, or serve them nacho style with dips and dressings. We love Jordan Moore's idea of creating a 'build-your-own tornado potato bar' for family meals, where everyone gets to top their own potato with a choice of sauces, veggies and cheese – just pop everything in bowls on the table with a serving spoon and let them do the rest.

2. If you have a spiralizer, use it to cut the potato into a spiral then gently push a skewer through lengthways. If not, prick the potato allover then microwave for one minute. Then skewer the whole potato, and take a knife to cut a spiral from one end to the other (cut at an angle, turning the potato as you go).

3. Grasp the skewer and gently pull the potato apart to separate the layers. Brush with olive oil and season to taste (add your parmesan, paprika or herbs if using).

4. Put the potatoes on a baking tray. One with a bit of depth is good so that the skewers are resting on the edges, suspending the potato for even cooking.

5. Bake for 30 minutes or until golden brown, then serve.

We love a big bowl of handcut crisps on the side of a few drinks on a Friday night. And the good news is that you can easily make your own. This can be made with potato peelings and enhanced with sweet potato, parsnip, carrot or beetroot slices. Want to pretend they are healthy? Whack some kale or beetroot in to crisp up too! Just make sure you get them all nicely coated in oil and seasoning.

2. Mix the oil and seasoning, then use half to coat the potatoes.

3. Remove the woody stalks from the kale and roughly chop into bite-sized pieces. Coat with the other half of the seasoned oil. Rub for 1–2 minutes until well-coated and starting to soften.

4. Spread the potatoes in a thin, even layer on as many baking trays as needed. And pit in the oven for 10 minutes.

5. Meanwhile place the kale on a tray in a thin layer. When the potatoes have had 10 minutes, add the kale and set the timer for 15 minutes.

6. Remove from the oven. Allow to crisp up for a few minutes before eating.

7. These are best eaten within a few hours but can be stored for 1–2 days in an airtight container. You will need to re-crisp on a low heat in the oven for 3–4 minutes before serving.

Hasselbacks have become a trendy alternative to baked potatoes in recent years, and one reason is that you get the taste of a delicious jacket potato, but they cook much faster. They can be served in the same way, or like the tornado potatoes above, drizzle them with sauces and toppings that will fall into the gaps for a gooey, yummy dish. Jordan's top tip is to use chopsticks or wooden spoons, laid either side of your potatoes when you cut them, to avoid cutting all the way through. This recipe uses sweet potatoes, but switch in regular baking potatoes if you'd like.

2. Cut the potatoes in half lengthways, then lay skin side up. Cut narrow slices (think £1 coin width) into the potatoes, making sure not to cut through the base.

3. Mix the cumin, seasoning and oil in an ovenproof dish, then rub the potatoes with the oil and place them with the skins up on the dish. Cook for 40–50 minutes until crispy and browned.

This recipe from Gousto is part of their Harissa chicken and sweet potato dish.

Potato cakes are another way to eat breakfast for dinner. If you serve with homemade beans as Gousto have you can enjoy it for any meal of the day. Or for a really comforting feast, add your favourite sausage and eggs.

Make the potato cake mixture ahead so that you can shape and allow to firm in the fridge for a while. This makes them less likely to fall apart in the hot pan when you cook them.

1. Peel and chop the potatoes into bite sized pieces.

2. Put in a pan of salted water. Bring to the boil then boil on a high heat for 15 minutes or until tender.

3. Once cooked, drain and run under cold water until cool enough to handle. Return to the pot and mash until smooth then add half of the chives, 2–3 tbsp of olive oil and season well.

4. Add the flour and mix to form a dough. Create a ball with the dough then divide into 6 balls on a floured surface. Flatten each ball into a patty with your hands and sprinkle with extra flour. You can now put in the fridge for half an hour to firm them.

5. Heat a wide frying pan over a medium-high heat. Add a knob of butter and two tablespoons of oil, then once hot add the potato cakes.

6. Fry for 4 minutes on each side (or until golden brown) then remove and pat off the oil on kitchen towel. Season with salt and pepper before serving.