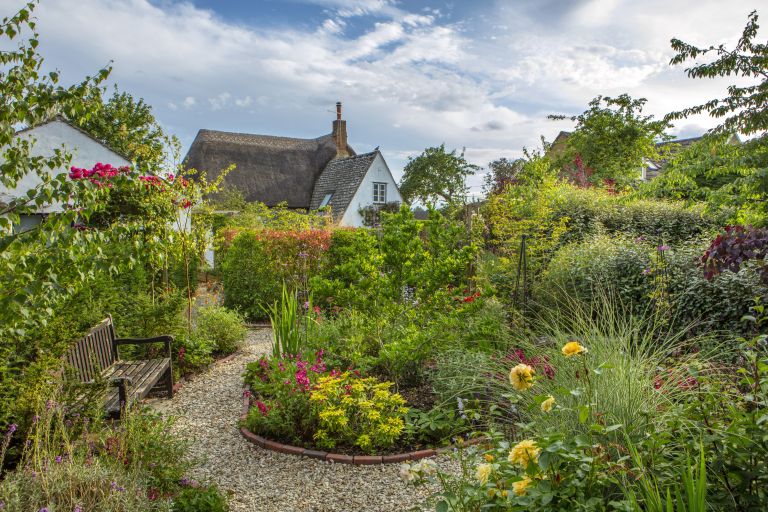 For most people, the first few days in a new home usually involve settling in and moving furniture around. No so for Tim and Olivia Payne, when they moved into Batts Cottage in the early spring of 2014.

‘On the first morning, I walked out into the garden and thought “Right!”’ remembers Olivia. The 17th-century thatched cottage near Witney in Oxfordshire required renovation and modernisation, but the couple, both classical musicians, instead first turned their energies to the outside space.

Read on to find out how they transformed the neglected plot, creating an award-winning garden in only a few short years.

Designing the garden from scratch

The neglected garden was crying out for a makeover. ‘We looked on Google Earth to get an idea of the overall shape and aspect of the garden, and then set about clearing the ground to make a blank canvas,’ Olivia explains.

The deep-set concrete paths, large conifers and Wendy house left by the former owners were removed before Tim was able to start digging.

The garden has been designed and built entirely by the couple, whose inspiration stems from watching vintage videos of Geoff Hamilton’s Cottage Gardens programme. ‘We knew we wanted a series of garden rooms to try and create an illusion of space,’ says Olivia.

Visiting private gardens open for charity under the National Gardens Scheme has also helped to shape their vision. ‘Looking around smaller gardens gives you far more inspiration than those of a stately home,’ Tim advises. ‘You can really get a feel for how a planting scheme would work in your own garden space.’

The couple's first purchase for the garden was a greenhouse, which they found on eBay. They positioned this in the ‘wedge’ shaped eastern side of the garden that had immediately been designated as a vegetable patch.

Find advice on how to choose a greenhouse for your own garden in our guide.

‘We started with the vegetable plot, which we screened from the main garden by planting a yew hedge,’ says Tim. They constructed raised beds in formal lines and once this area had been laid out, Tim and Olivia were able to concentrate on the main plot of a third of an acre.

If you want to make raised beds for your own garden project, find out how to make them in this step by step guide.

A garden to complement the cottage

‘We wanted to avoid the square lawn with plants around the edge type of garden, and aimed for a loose planting style to try and echo the “wibbly wobbly” feel of the old cottage,’ says Tim, describing the style of garden that he and Olivia designed.

Their vision was to design a journey through the garden, giving the feeling that the plants were there first and the twisting paths were then formed through the planting.

The result is a remarkably mature garden where evergreen hedges of Prunus lusitanica, Portuguese laurel, and Virburnum tinus form the bones of the design, while brick-edged gravel paths wind through pretty cottage-style perennials and grasses.

Beside the house, a gravelled suntrap is brimming with pots and groups of fragrant herbs and lavender. ‘We love our herbs and it’s so nice to have them close to the house, not only for culinary use but also for the fragrance,’ explains Olivia.

Find advice on how to create a herb garden or incorporate herbs into your own planting scheme.

Steps lead to the main garden where a small oval lawn and outside seating are surrounded with pink cosmos, dark plum-coloured Penstemon ‘Raven’ and ‘Blackbird’, Stipa gigantea, golden oats, and Salvia ‘Caradonna’.

The garden rooms are cleverly screened from one another to generate a surprise around every turn in the path. ‘We have tried to put taller plants in the centre of the beds to make you want to travel around the garden and not see it all at once,’ says Tim, who has incorporated flowering trees into the planting scheme.

‘We like the busy and crowded planting style and our aim was to feel more “tucked in”,’ adds Olivia, who originates from Sydney, Australia. ‘I love English cottage gardens and for ours we have tried to use a repetition of colours in a palette of pinks, apricots and plummy reds.’

Purple foliage, such as Prunus ‘Nigra’, cotinus, smoke bush, and Malus ‘Royalty’, crab apple, are a good foil for the peachy-apricot colours and provide winter structure along with the evergreen hedges and clipped box. ‘The hedges and shrubs are Tim’s thing, while I’m all about the pretty stuff in-between,’ she laughs.

Following a trip to Sissinghurst, the couple are currently planning the next project, a white ‘Moonlight Woodland Garden’, using an existing flowering cherry as a starting point. Other spring-flowering trees in the garden include Magnolia stellata and Prunus ‘Chocolate Ice’ with its dark copper leaves that contrast beautifully with the white blossom that covers its boughs in spring.

‘Having a garden was critical to us. It’s a calming and stress-relieving sanctuary from our busy working lives,’ says Tim. 'It really is food for the soul.'