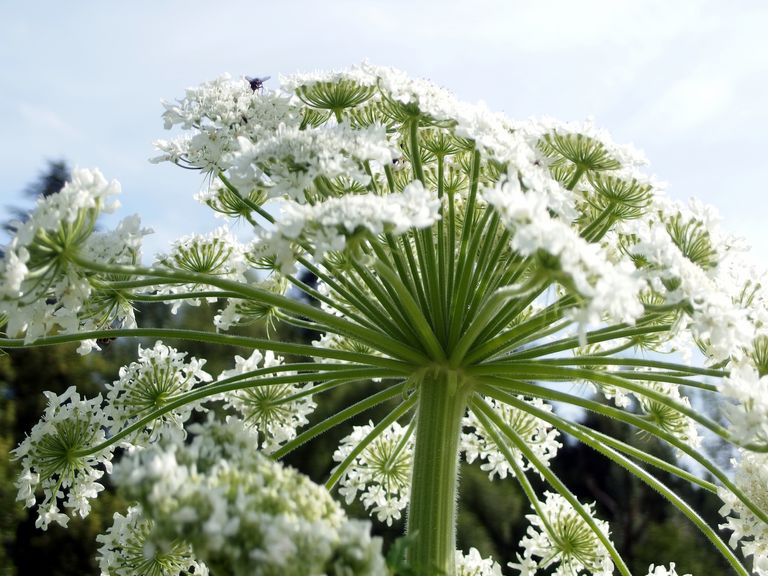 Have you heard of giant hogweed? The botanical name of this plant is Heracleum mantegazzianum, and this very tall plant can do some serious damage to your skin. Coming into contact with it causes severe, painful burns that can result in permanent scarring and photosensitivity, i.e. sensitivity to the sun.

Recent warm and wet weather is reported to has caused giant hogweed to spread all over the UK, so it's important to learn to identify this plant and know how to get rid of it safely if you find it in your garden.

How to identify giant hogweed

Giant hogweed is sometimes mistaken for cow parsley hemlock, or angelica: like both of those plants, it forms umbrella-shaped clusters of white flowers in the summer. The main differences are the size – giant hogweed grows as tall as 16 feet, as opposed to six feet for cow parsley – and the stems. The stems of the giant hogweed plant have purple blotches and white hairs on them. The flower clusters are also much larger than in cow parsley: as large as two feet across.

Having said that, giant hogweed doesn't usually flower in its first year, making it difficult to detect when it's a young sapling. The best way to identify this plant while it's young is to watch for sharply incised compound leaves and the purple stems with white hairs.

Where is giant hogweed found in the UK?

Giant hogweed has been spotted all over in the UK, from Scotland to London. It typically grows along river banks and ravines, as well as heathland. If your garden is adjacent to this type of terrain, you may well find giant hogweed in your garden. You can see the distribution of giant hogweed in the UK at Plant Tracker.

How to get rid of giant hogweed

Because of the risk this plant poses, you must approach it with great caution. If you've identified giant hogweed in your garden, you will need to be fully clothed, wear gloves, a mask and glasses (it can damage your face and eyes) during removal, and wash all clothing immediately after.

Giant hogweed is a resilient plant and cannot be eradicated by just cutting it down. You must destroy its root either by digging it up, breaking it up with a spade or sharp trowel, or pouring strong weed killer over the root.

Do not attempt to tackle giant hogweed that's come into bloom: a single flower stem can carry as many as 5,000 seeds that will spread everywhere when the plant falls. If you've found a giant hogweed that's blooming in your garden, call the environmental service of your council.

If you've managed to remove a plant that isn't blooming, there are very strict rules for its disposal. You can't dispose of it by putting it in your bin or garden waste. Either call your council or burn the plant in your garden.