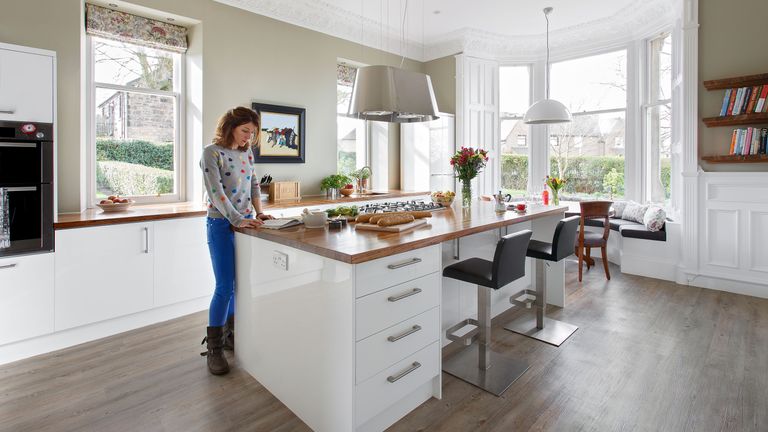 Making room for a family doesn’t necessarily mean extending. For many of us, making the most of what we have is the most affordable or practical way forward. Whether you’re limited by budget or just want to preserve the period character of a house, working within the footprint of your property can be as satisfying a project as any extension.

For Catie and Nick, turning their small, north-facing kitchen into a family room has been transformative for them all. Deciding against a kitchen-diner extension, they’ve reaped the benefits of the large, sunlight-filled room they already had. Simple features and a white scheme emphasise the garden views, while a carefully curated selection of artwork adorns the walls and adds personality. Here, Catie takes us through the steps to their new family space…

Want to transform your kitchen? Go to our kitchen ideas hub page and find lots of design ideas and expert advice on how to do it.

The owners Catie Wearmouth and her husband, Nick, a home audio specialist, live here with their three children.
The property A five-bedroom Victorian detached house in West Lothian.
Project cost £37,000.

‘We lived here for three years before we started altering it,’ Catie says. ‘Our children were born during that time so our needs kept changing and we didn’t want to rush into anything. There was a perfectly serviceable kitchen at the back of the house that we seriously considered extending into a kitchen-diner, but we decided against it in the end and it’s now our utility room. Once we’d lived there a while, we found we were strongly drawn to the sunnier, south-facing front of the house for the kitchen space instead.'

‘We hired architect Tom Young, a family friend, to discuss the plans. He was all for an extension at the back, but, in the end, we decided it wasn’t right for us. Having the light was our priority, so we preferred the “dining room option” – a room at the front of the house that had been Nick’s mum’s underused sitting room. She’d lived with us for a couple of years when we first moved in.

‘It’s a lovely sunny room that overlooks the garden and we realised it would be perfect as the kitchen. We decided to turn the small bathroom behind it into an adjoining scullery to hide things like the fridge-freezer. We also wanted to add a door at the back for that much-wanted garden access.'

‘To get that connection to the garden and bring in as much light as possible, we added two windows to the south wall alongside the existing bay window. We thought about floor-to-ceiling windows, but it would have meant having more units opposite, and we wanted to preserve the wooden panelling on that wall. I also felt that floor-to-ceiling windows might make the room too modern. We very much wanted to respect the period integrity of the house when making all of these improvements to the layout.’

‘The kitchen is deliberately simple to make the garden the focal point. We wanted to be able to enjoy the sun and watch the children playing. We opted for a minimal white kitchen – the only added ornament is the subtle floral fabric for the blinds and cushions in the window seat. We were tempted to get an Aga but felt it could end up dominating the room.

‘I’ve kept all of the kitchen paraphernalia minimal and placed the hob on the island unit so I can join in with conversation while I’m cooking. The island itself is the main feature. It has a lot of storage, which we needed because we don’t have wall cupboards – we felt they would have made the room feel more enclosed than we wanted.’

Catch up on fabulous house renovations, style updates and advice with a monthly subscription

‘Living in the house throughout the project was challenging, but we were able to use the old kitchen, now our utility, and we have a bathroom upstairs, so there was no real hardship.

'This was our third major renovation – we’ve been through a lot worse! The noise and dust are stressful, but so is moving out, and it was only for a short period. The whole thing was completed in 12 weeks.

‘The space now is a family room first, then a kitchen. I love sitting at the table in the bay window. I’ve hung my favourite paintings here because we spend so much time in this room.

'The additions and alterations look as if they’ve always been there. We’re already gearing up for our next project – landscaping the garden we so enjoy looking out over from our kitchen.’