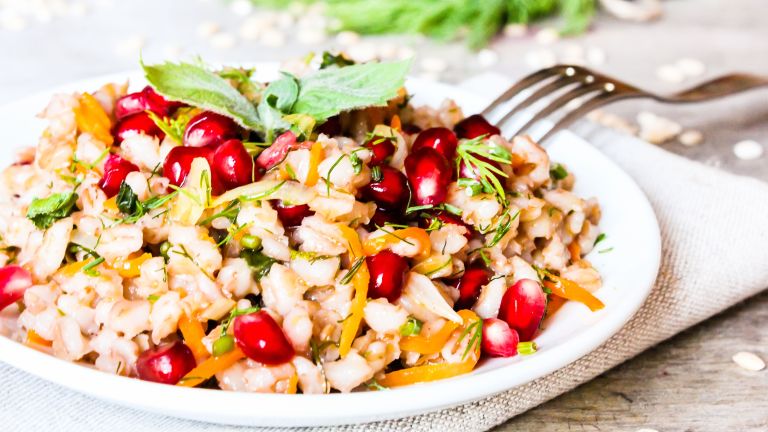 We'll talk you through how to make pearl barley on its own, as well as part of a stew, soup and salad. Then, for more recipe ideas, head over to our food hub page.

How to cook pearl barley

First time cooking pearl barley? Don't panic, it's much less temperamental than rice and – if you follow our simple steps – can be left to boil away, with only occasional checks, while you get on with other things. Here's how to cook pearl barley on the hob:

2. As with all grains, you'll want to start by rinsing your pearl barley.

3. Once rinsed, place your uncooked pearl barley in a saucepan.

4. You'll want to add 250ml of water for every 70g of pearl barley. Bear in mind that adding water alone will yield rather bland pearl barely. So, you might want to think about exchanging water for stock, or adding seasoning – at least a little salt and pepper – to the saucepan.

5. Cover your saucepan and leave your pearl barley to simmer for 25 to 30 minutes. You'll want to check it periodically to give it a stir.

How to cook pearl barley in a rice cooker

It's also possible to cook pearl barley in a rice cooker, if you so desire. To do so, add the ratio of pearl barley to water (or stock) described above – 250ml of water for every 70g of pearl barley – to your rice cooker. Then, cook your barley for one cooking cycle. Once cooked, leave to rest for 15 minutes.

How to cook pearl barley in a stew

As mentioned above, pearl barley makes a hearty addition to a vegetable stew. Not only will the addition of the grain thicken your stew, but it will also give it a nice, creamy texture, too.

You'll want to add your uncooked barley to the stew at the point that you've softened any vegetables, or meat, and are leaving your stew to simmer away as flavours infuse.

You'll need to add a greater ratio of water (or stock) to pearl barley than described above. Perhaps an extra 500ml, or so, to the total amount, depending on how much liquid you like in your stew. It's a good idea to keep an eye on your stew as it cooks and to add some extra water if it appears to be getting a little dry.

How to cook pearl barley for salad

In terms of ingredients for a pearl barley salad, we love adding roasted butternut squash, watercress, pomegranate seeds, feta, toasted pumpkin seeds and a dash of lime juice and olive oil for a balanced, flavourful meal. However, the choice is yours – something as simple as tomato, cucumber and some fresh parsley can be tasty.

Looking for more ideas and inspiration?