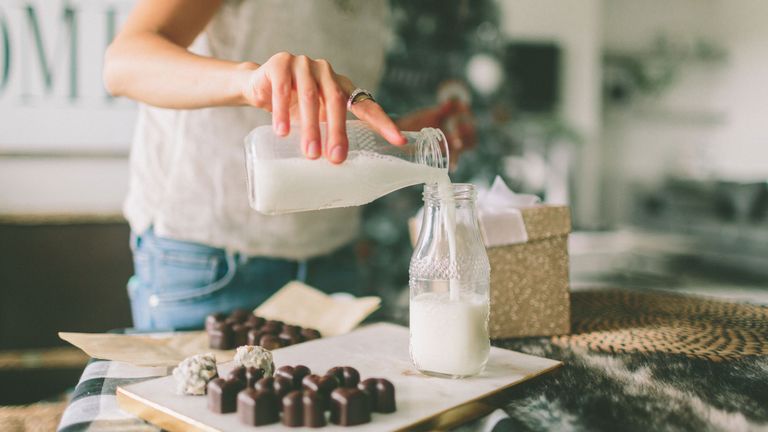 Whether you've bought too much milk in your big shop, or want to have a go at making ice lollies with your milk alternatives, we reveal – once and for all – whether you can freeze milk. We've also got plenty of top tips on the best way to freeze your milk safely, so you can keep it fresher for longer.

After all, pouring away milk is not only a massive waste of money, but this form of food waste also negatively impacts the environment and isn't great for the sewage system. So if you find yourself with too much milk,  your best option is to freeze it for use at a later date.

For more food hacks and recipe ideas, head over to our food hub. Or, use the links below to discover more about each type of milk:

Can you freeze milk?

Yes! It's perfectly safe to freeze milk if you've bought too much, or are heading on holiday and haven't managed to finish an entire carton.

That said, it's not possible to freeze milk stored in glass, as the volume will expand and cause the bottle to crack. So, in this instance, consider transferring your milk into a plastic container, or placing in an ice tray for single-use measures.

It's also important to consider the use-by-date of your milk. If it's expired, freezing won't bring it back to life. Similarly, if your milk has been open for more than a day or so, we wouldn't recommend freezing. Instead, try to use it up as soon as possible, give it to a neighbour, or offer it up on a site such as Olio which works to redistribute unwanted food.

Here are our top tips for freezing milk:

When it comes to defrosting milk, we'd recommend doing so gradually in the fridge. Or, placing in a bowl of cool water and allowing it to warm up gradually.

Can you freeze almond milk?

Technically it is possible to freeze almond milk, though most manufacturers would not recommend doing so. The problem is not with the freezing of the milk, but with the thawing process. Many people have reported severe separation, with large chunks floating in a watery mixture. There are also reports of changes in taste and colour.

So, while there's no need to worry about freezing almond milk from a health perspective, from a taste perspective it's not advisable.

Can you freeze coconut milk?

Yes, you can freeze coconut milk. In fact, doing so will not only lengthen the life of your milk, but will allow you to form some pretty tasty treats too – coconut ice lolly, anyone?

It's safe to freeze your coconut milk in the carton. Or, if from a can, pour into a freezer-safe container, ice lolly mould, or ice cube tray for single-use measures. Once frozen, you can keep your coconut in the freezer for four to six weeks.

Can you freeze oat milk?

Defrost gradually and ensure to give it a good shake before use. You may notice a slight change in consistency, but don't let this put you off using your oat milk.

Can you freeze soy milk?

Technically you can freeze soy milk, though manufacturers don't recommend doing so on account of changes in texture and consistency. Our advice would be that if you intend on freezing your soy milk, ensure you're using it as part of a recipe when you come to defrost it. Consumed alone, you're not in for much of a fun time.

Or use up your milk before it goes off: