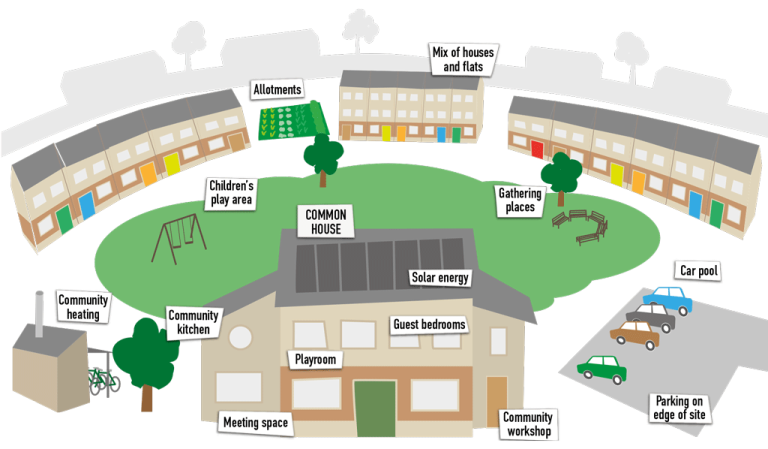 There's a bit of a buzz about cohousing at the moment. But what is it, and how could it benefit you if you're looking to take a step on to the property ladder or are even considering downsizing? We look into it in this report.

As the UK housing crisis deepens, it looks unlikely that the government will be able to meet the target of 300,000 new homes per year needed to close the housing supply gap. And, with the supply of existing housing dwindling every year, buying an old home is out of reach for a great many. Self-building has been steadily gaining popularity as a result, with as many as one million Britons planning on buying land and building their own modular home.

Yet self-building can be expensive too, depending on where in the UK you are. Relocating to the Scottish Highlands, where land is cheaper, is not feasible for everyone. Could the Scandinavian model of co-housing provide a solution, in particular for the more expensive areas of England?

Cohousing has been around in Scandinavian countries since the 1960s, and originates from Denmark. There are many descriptions for what cohousing is, such as 'intentional living' and 'living apart together'.

Typically, cohousing is organised by a group of people who share values and a vision for the kind of neighbourhood they want to live in. But the practice of cohousing is very different from communal living (which also was popular in the late 1960s and 1970s): cohousing allows individuals and families their privacy, with separate entrances. There is usually a number of shared facilities, such as a laundry, a communal garden, and a kitchen or canteen. However, this doesn't mean that you do each other's washing up, although some cohousing communities may choose to help each other out with cooking and other chores on a regular basis.

How does cohousing work?

Cohousing groups buy land together and then self-build modular homes on that land. Some cohousing communities choose to convert old buildings instead. Establishing a cohousing community can be a long process, requiring planning permission, which will often stipulates that there needs to be a certain level of guaranteed interest in a particular cohousing project and that the homes will sell.

Some groups can get guidance on funding and legal issues from the Nationwide Foundation. Current successful cohousing projects include Forgebank in Halton, Lancaster, which consists of eco-homes for around 80 people; Thundercliffe Grange, in Yorkshire, which converted a manor house for the area's civil servants and their families; and Cannock Mill in Colchester, which is an eco-friendly cohousing community for over 50s.

Could co-housing be for you? You will need to be prepared for a sociable and involved lifestyle where you'll get to see your neighbours quite a bit more than in private housing. And, unless you are purchasing a house in an existing community, you'll need to be prepared for a lengthy and complex application and building process. To get a sense of the kinds of co-housing groups currently operating, visit the UK Cohousing website.