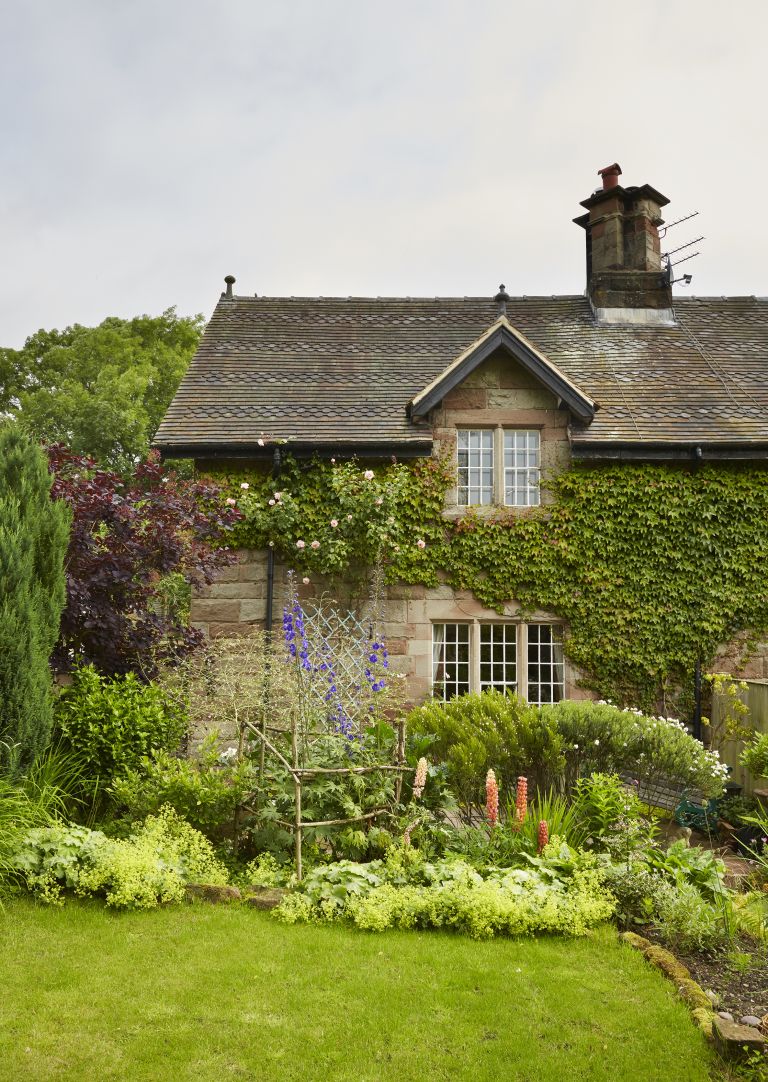 Owners  Nick Wigg and wife Jenny Larvin live here with dog
Gyp. Nick was a social housing consultant and Jenny, a qualified teacher, is now a textile artist and designs and makes quilts.
Property  A three-bedroom former farmworker’s cottage near Uttoxeter, Staffordshire, built in around 1896.
What they did The couple extended the property to create a spacious kitchen with a door onto the pretty garden. They also reconfigured the existing layout.

This pretty rural cottage, with its patchwork of pink stone and gables fitting together like the pieces of one of Jenny’s exquisite handmade quilts, is in itself a work of art. Although it was, by husband Nick’s admission, not very prepossessing when the couple first saw it. Its setting, in the shadow of a ruined Cistercian abbey, however, couldn’t be better.

Read on to find out how they created this dreamy country home, giving it a fresh new look, then browse the rest of our real home transformations. Read our guide on renovating a house, too, for more guidance.

The end cottage in a row of farmworker’s homes in the heart of the Staffordshire countryside, with farm fields as far as the eye can see, it offered plenty of scope for a flower and vegetable garden, plus space for a croquet lawn - more on that later.

‘I loved it straight away,’ says Nick, ‘but Jenny took some convincing because we’d been living in Alton where there was a real sense of community and this was really isolated.’

Luckily for Nick, and for the little cottage, Jenny was won over by the wonderful living room, with its windows on two sides. Before the couple could contemplate relaxing on the sofa though, there was a whole lot of work to tackle, starting with the demolition of an ugly 1960s block and render ground-floor bathroom extension at the back of the house.

‘We spoke to our daughter’s friend Elizabeth Hackett, a young architect just starting out, and she came up with this wonderful plan with its jigsaw of gables all facing different ways, but fitting together brilliantly,’ explains Nick. ‘Adjoining the original house was an old coal house, with very deep foundations, so we took that down and reused the stone for the extension.’

The stones in question are thought to have come from the abbey ruins, a local sandstone varying in hues from a dark pink, through terracotta to pale sandy shades, and were used to build most of the homes in this little hamlet. Elizabeth’s plans included a stone kitchen extension, breakfast room, porch and pantry, with an extra bedroom on the first floor and a new bathroom upstairs in place of one of the existing bedrooms.

Because the cottage was so close to an ancient monument, the conservation planners wanted to call in an archaeologist. ‘But Elizabeth put together a six-page archaeology methodology for dealing with the footings’ dig spoil and the build was allowed to go ahead,’ says Nick. The couple have tried to use as many recycled or freecycled materials as possible to reduce the carbon footprint of the building. ‘Local stonemason Steve Holdcroft cut the huge square stone blocks laterally, doubling the number of stone facings to build the entire new set of walls,’ says Nick. ‘He also sourced small quantities of stone for the new windows and French window quoins, lintels and sills from nearby Hollington quarry, leftover from bigger jobs so at a good price, but it all matches and looks as though it’s always been this way.’

The couple lived with their daughter nearby during the five-month build, then Nick set up camp in one room and completed the work, laying floors and moving stud walls to create new bedrooms.

‘We then had to make a home from this shell of a building,’ Nick says. ‘We drew onto the plans, and I set to work making the things we wanted. For the kitchen, for instance, I started with a framework and stuff just grew. Pretty much everything you see in this house I built, all to Jenny’s designs - everything from the panelling and floors, right through to the thunderbox toilet.’

‘What emerged was a style we dubbed “cottage baronial”,’ continues Nick. ‘We thought that panelled wainscoting would suit the house, with its old oak beams (which we added) and gothic gables, but there was a practical advantage too in that it improved the insulation, and after one cold winter here that was a real bonus.’

‘The finished look – the art, the quilts and the homely touches are all down to Jenny,’ he adds proudly.

‘This house is about how Jenny feels about her place in the world, and how she wants her surroundings to be, and that’s firmly fixed in the Arts and Crafts movement, and it works brilliantly.’

Once the inside of the house was finished, Jenny and Nick turned to the garden, which needed pathways, flowerbeds, vegetable gardens and that all-important croquet lawn.

‘We’ve always hosted a croquet party every year, in every place we’ve ever lived,’ says Nick. ‘So when the garden was finally ready for that, we knew we were home at last.’