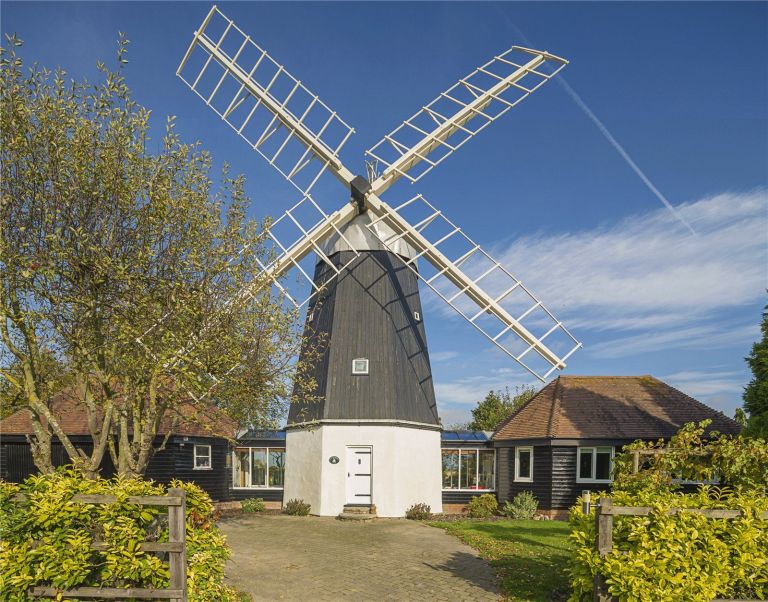 Are you looking to move house? How about going rogue and instead of going for your standard house, instead invest in something more... unique. From converted water towers to a cottage that has a full on hobbit house in the garden, we have rounded up the most unusual properties for sale right now…

1. A hobbit house in Cornwall that could make you £££s

Fancy moving to The Shire (kind of)? Then this property is for you. Officially named Toddalong Roundhouse, this straw bale-built and grassy-roofed property is tucked away in the back garden of a four-bedroom home in St Mabyn, Cornwall. So yes, there is a proper, human-sized house that you could actually live in.

The current owners let the place through Airbnb at weekends. This unique outhouse comes complete with a kitchen, bathroom, mezzanine floor, snug, fire pit and sleeps four people – perfect for Frodo, Samwise, Pippin and Merry. So there is also potential for this property to make you some £££s too.

2. A 19th century windmill near Cambridge

This three bedroom property is a renovated and extended windmill in the village of Swaffham Prior. The building has been kept in fantastic condition having had its beautiful sails (apparently that's what they are called) replaced in 2017. Oh and there’s a hot tub...

3. A nine bedroom castle in Durham

Live like the queen (or king) that you are, and invest in your very own castle. This elegant Grade II listed building in Durham boasts everything from a grand reception hall and drawing room to a games room, breakfast kitchen and nine bedrooms in total. The property also enjoys 14 acres of wonderfully landscaped gardens and mature woodland. How marvellous!

You will be top of the class (or some other awful school related pun) in this gorgeous Grade II listed family home converted from a former schoolhouse. As well as the beautifully renovated main building, there is also a detached annex with a newly fitted kitchen, and the potential for it to become an open plan living space.

‘Accessed along a leafy lane, at The Old School Works it feels like you are in the heart of the countryside. This exceptional Grade II listed converted school has stunning contemporary interiors and a detached self-contained annexe.’ - Savills Nick Ingle. Click the link in bio to find out more. #forsale #savills #harpenden #gradeiilised #theoldschoolworks #annexe #aspleyguise #miltonkeynes Savills

5. A mansion and a private island... in Canada

If you are in the market for a private island, this could be your dream property. Situated in Mahone Bay in Nova Scotia, Canada is Kaulbach Island – boasting almost 60 acres of land covered in woods, meadows and coastline. At the heart of the island there is an 11 bedroom Cape Cod style property, as well as a beach house and a farm thrown in for good measure. Just FYI, you will have to buy a boat to get there so add that to the cost.

We're showcasing our favourite unusual properties from 2018, starting with a luxury mansion on its very own private island... Know someone who'd love to escape here? Rightmove

Literally, there are still pews and an altar in there. But previously there have been plans to convert this church near Durham into a six bedroom house with the church hall (yes it comes with one of those too) being turned into two three-bedroom apartments. If you are looking for a big reno project, this definitely looks promising!

If you love idea of living in a converted church but don’t fancy pulling out pews and a pulpit, then this fully converted church in West Yorkshire could be a great investment. It’s been really thoughtfully designed, retaining many of the original features like the stained glass windows and impressive beams. It has five bedrooms and a modern open-plan kitchen with beautiful vaulted ceilings, plus a home gym!

8. A converted water tower in Kenilworth with stunning views

We think this impressive building in Warwickshire might be our favourite quirky property for sale right now! Converted two years ago from a redundant water tower, this home now has both contemporary fixtures and fittings along with a wealth of original features, the best among them being the roof terrace that gives you breathtaking views of the surrounding countryside.

This is a truly unique #familyhome with incredible #views. The #property was converted in 2016 from a redundant #watertower and retains a wealth of original features combined with contemporary fixtures and fittings, making it an exceptional 21st century #home. The roof terrace is an idyllic space perfect for warm summer days, being completely Astro-turfed and having stunning #views over the surrounding #countryside and landscaped garden. A driveway provides parking for several cars and access to the garage. Tune into George Clarke’s Amazing Spaces on @channel4 8pm tonight to see more. Guide price £1,500,000. Call @wwj_knightfrank +44 1789 869271 or search ID: STR170106. Link in bio. #CountryView Knight Frank

9. A house built into a Venetian ruin... in Windsor

Not something you see every day. This house – on the Thames near Windsor – has been built over a 30 year period, transforming the original bungalow into a magnificent Venetian palace – complete with a throne room, castle moat and a ‘crumbling’ sunken garden. What do you think? We are kind of loving its weirdness.

This bungalow has been transformed into a magnificent Venetian palace - boasting everything from a throne room and castle moat to a magical looking sunken garden… You don't see something like this everyday... Rightmove

For those of you who don’t what an Oast house is, it’s a building originally designed for kiln-drying hops as part of the brewing process. This stunning twin kiln Oast conversion near Maidstone has five bedrooms, a modern kitchen/breakfast room and a handy utility room. The property has its own private garden but also benefits from being surrounded by a large expanse of landscaped gardens with mature trees and shrubs which are owned and maintained by East Wing.

Read more on buying and selling your home...