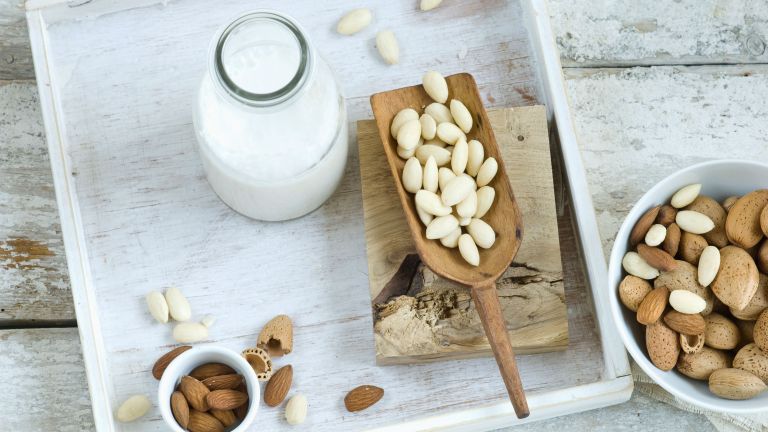 Almond milk may seem like the best milk alternative to dairy: it's vegan, it tastes nice, and it's made from plants, so it should be sustainable to produce, right? Sadly, wrong. As the details of almond production processes are coming to light, there are very strong reasons to reconsider replacing dairy with almond milk, and so we're looking at the best and still very tasty alternatives.

Of all the non-dairy milks, almond milk is 'by far the thirstiest plant milk. Producing a single litre of almond milk requires a whopping 371 litres of water', this according to The Grocer.

Recent exposés of the almond growing industry reveal the harrowing truths about the exploitation of bees, who are dying in their billions as the pressure on manufacturers to produce almond milk increases. More than two-thirds of the world's almond milk is produce in California, where bees are being transported in huge numbers to pollinate the almond groves.

As experts explain, this involves waking them up from dormancy before they are ready, transporting them over huge distances (bees don't do well when moved between locations) and forcing them to pollinate a limited area planted with just one crop, which leads to stress, exhaustion, and disease in bee colonies. The scale of the problem is so vast that a scientist has compared the process to 'sending bees out to war'.

Which milk is best for the environment?

Want a truly sustainable alternative to dairy? Try oat milk. Oats are one of the most sustainable crops currently grown, and oat growing is very well-established, so a surge in oat milk popularity would not require an increase in land use. Oats also are self-pollinating and don't require the mass exploitation of bee colonies.

Love the nutty taste of almonds and think you'll miss it? Try hazelnut milk. Hazelnuts are pollinated by the wind and grow abundantly in a variety of climates, which again means that growing them on a larger scale wouldn't require rainforest clearances in developing countries (a huge problem with the production of soy, for example).